What is the algorithm used by ESRI for finding loops in a geometric network?

I've been trying to develop some code for ArcMap (VB .net) that would take a river network, identify and label the loops. These loops can be simple bifurcations or highly thread braided channels.

I was tinkering around with a sample of the NHD from the USA which is supplied as a geometric network. I tried the find loops Trace Task and was blown away by the fact that A) it did what I wanted and B) it is incredibly fast (less than a couple of seconds for a huge network).

Below is a screen shot of a bit of a network for Alaska with the polylines highlighted in red indicating they are part of a loop. 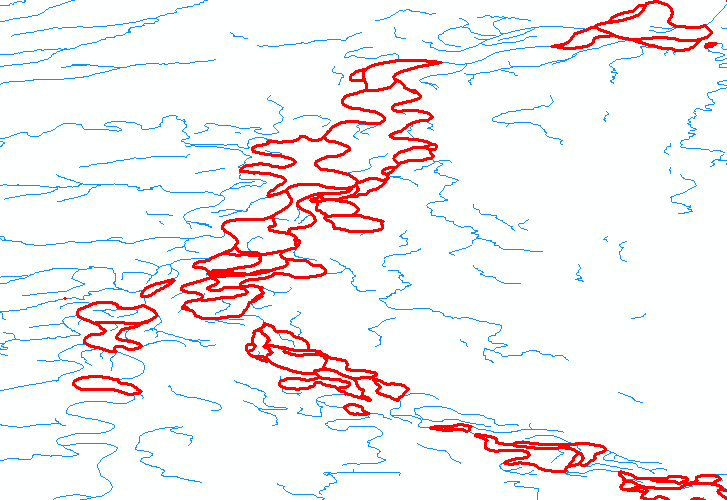 So I started looking on the internet to see if the algorithm is documented anywhere and I have failed to find anything.

I'm not a mathetician but I got the impression that I was looking at some sort of algorithm that detects "strongly connected components in an acyclic directed graph". I have found many references to a Tarjans algorithm. I found this blog page which was the easiest attempt to explain these sorts of algorithms but as always they show a very simple graph which is not a realistic scenario when considering river networks. As the screen shot above shows you have loops within loops. I could not work out or even determine if it would work in a multi-threaded network.

If anyone knows of a site\paper than describes such an algorithm in a simple manner that would be great!

This is a fairly standard Computer Science algorithm. I'd think it uses something like the optimal algorithms described on this page about looking for loops in a linked list.

I feel I should answer my own question here although it was more of a work around. I was interested in how ESRI could identify loops in a river network. I never really got to the bottom of this despite the advice above.

What I did do was revisit my algorithm and did some performance testing. I have a very iterative approach to solving this task and clearly nowhere near as efficient as ESRI's algorithm but it did work! The sticking block was the way I kept looping adding polyline ID's to a list.

I stumbled across something called a HashSet in VB .Net and tweaked my code to use this. This had an amazing improvement on the speed of my code, what took about an hour is now reduced to a few minutes. OK still not as fast as ESRI's algorithm but well within my accepted processing speed!

So in a nutshell if you are doing iterative union like operations on lists then try a HashSet it's super fast!

Not the answer you're looking for? Browse other questions tagged arcgis-desktop algorithm geometric-network multithreading rivers or ask your own question.