I'm having trouble getting my SQL query to work with three tables. I'm new to SQL to I've already spent considerable time trying to understand the documentation and making some sense of it. I'm using Postgres 8.3 with POSTGIS. I have three tables:

I need my final output to look like this: 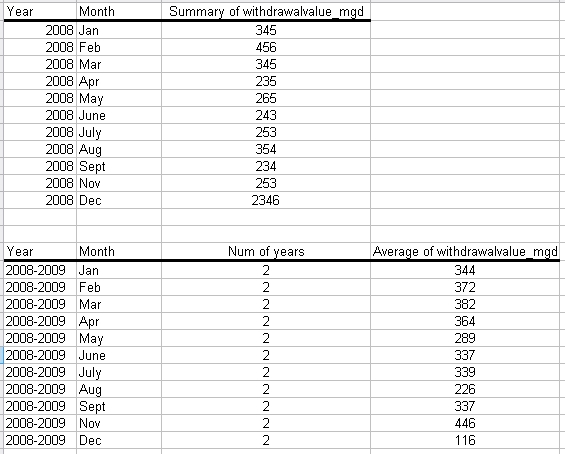 The shed_id parameter has already been supplied from another function, so it's being supplied to this query as ${param.shed_id}. I'll be letting my user select a specific year to summarize to get the first table (and likely suppling it using another ${param.requested_year} ), but then I also want to average the values by month over all the years in the dataset. I might have to run a separate slightly altered query to get the second table, but I was hoping I could do it in one query.

When I run the query, it gives a syntax error on a comma, but it doesn't tell me which one, but I suppose there's a lot more wrong with this query. Any ideas on how to query these three tables correctly, or at least point me in a direction to investigate? It's also unclear to me if I should instead be using the date_part function.

Final Solution: I solved this problem using some of the thoughts Mike provided. I couldn't get the first function to work, but realized I was getting years with decimals (i.e. 2008.0) and was getting the month number, not the month name. I then wanted to sort those month names correctly. Here's what my worked in the end:

Note there are several other changes, such as proper ordering of months, using their month numbers via date_part. Also I generally prefix the format of to_char with FM to avoid fill spaces.

Not the answer you're looking for? Browse other questions tagged postgis sql postgresql or ask your own question.

10
Selecting only Spatial tables from PostgreSQL database?
4
Spatial index to speed up the query
0
In QGIS can I show just the lines in a Postgis query? How can I do that?
3
Link to another table in CartoDB infowindow
4
PostgreSQL/PostGIS Geom to JSON with Inner Join to another table
3
PostGIS crosstab on multiple point tables
1
Saving select query results (year wise) from PostgreSQL/PostGIS to text files
0
Correct format of query in geoprocessing tool