I have several polygon objects and I need to "merge (or combine or dissolve)" them toghether into one polygon object. With a GIS tool like QGIS, I do this with processing option "Combine selected spatial objects" and the result is what I expect but doing programmatically with Java and GeoTools library, I'm not able to get this behaviour.

To give you an idea, I have two polygons in one layer like this:

Now I want to transform them into one object. I tried with "union" method of Geometry class in this way:

And this is the result when I visualize the union in the GIS: 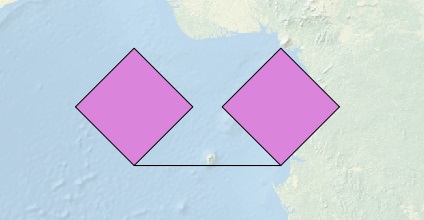 As you can see, a line is added between the two figures (although the union is made succesfully and I have only one entity as I wish) but I want this without the line connecting them. The polygons are well formed because by doing with QGIS the operation is made right.

Anyone know if is it possible?

I'm looking for some time and I'm concluding that maybe my approach to achieve this is bad.

Assuming that your polygons never overlap then you can generate a multipolygon from them using something like:

If they might overlap then you will need to test them for intersects and then union the ones that do overlap and replace the two polygons with the new result before you build the multipolygon. This is left as an exercise!

Not the answer you're looking for? Browse other questions tagged geotools polygon-creation jts-topology-suite or ask your own question.

1
How to extract common outline of multiple polygons with code?

6
Is it good practice to manage all JTS spatial objects as abstract Geometry instances?
3
How to write GML parser with Geotools?
2
Buffer Zip Region Polygon with GeoTools
2
How to create a JTS geometry with holes and islands?
3
How to combine LineStrings using JTS
2
Line between outside and inside polygon - geotools
2
Thiessen Polygon - geotools
4
Combining neighbor polygons (NOT touching) making one using JTS/GeoTools?
1
Comparing two shapefiles(layers) and display the differences in features in MapContent object in GeoTools
1
Summing mulitple GridCoverage Objects using GeoTools?