Is there a way to show a layers feature count in the TOC?

I'm using ArcGIS 10. In ArcMap's table of contents (TOC), is there a way to have the "Layer Name" automatically show a count of the total number of features in each layer?

I was thinking the TOC would look something like this:

I found this option for Unique Value renders, but:

The "List By Selection" tab sort of has this capability, but only when there are selected features.

As @Paul & @PolyGeo suggested, I think trying to make this a Python Add-in makes the most sense, and I will pursue that idea later.

In the meantime, I put together code that will Add/Update the TOC Name of user-defined layers in an MXD with feature counts. For my purposes, I just created this as a GP tool that would accept individual layers via a multivalue input that accepts "Layers" in the script tool. That allows me to update multiple layers "on-demand", just updating the feature counts of those layers of interest.

I haven't come up with a way to have this run automatically, however in doing some testing of old MXD's, that may not even be desirable. If you have a lot of layers with a lot of features, it could be a slow process. 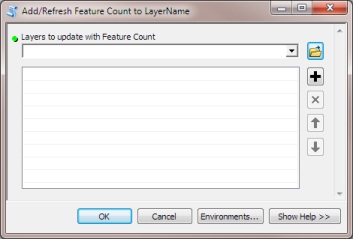 Not the answer you're looking for? Browse other questions tagged arcgis-desktop arcmap arcgis-10.0 legend or ask your own question.

0
Feature Cursor Count on mutiple layers
4
Avoiding Legends too large to display in ArcGIS message from ArcGIS for Server WMS service?
4
Changing symbology of selected features only using ArcMap?
4
How to get counts from a table to produce a heatmap?
1
Show distinct features count as label in ArcMap10.2
2
Cannot get Remove From Current Selection to work in ArcMap?
1
How to do a Loop with a condition in Model Builder?
2
Updating symbology values/fields shown based on location selection in Data Driven Pages?
1
Delete ONLY selected features in ArcMap / ArcPy
0
Sorting layer created by Create Layer from Selected Features using ArcMap