Choosing intervals for a map of race in the United States

I'm creating an open map layer of race in the United States using Census Data. This layer will be publicly available in the near future as "Justice Map". The goal is to help others create maps using this data layer. I'm generating tiles with TileMill. I will be creating tiles for Google Maps zoom levels 0-13 -- all the way down to the block level.

How should I choose my intervals for coloring the map?

The problem is that all the non-white racial groups are heavily concentrated in medium or small sized areas (notably Asians and Native Americans). I don't want to distort the geography to make the size of a state proportional to its population, as that would make it hard for other people to use this open map layer.

The maps below are an example of percent black for each census tract. However, I will be doing this for other races including Black, Asian, Native American, Hispanic, White Non-Hispanic, Multi-Racial, other race, and Hawaiian or Pacific Islander.

So far I'm planning on using a sequential color scheme from colorbrewer2.org and nine categories.

Equal Breaks: it makes the map look too empty for most racial groups. 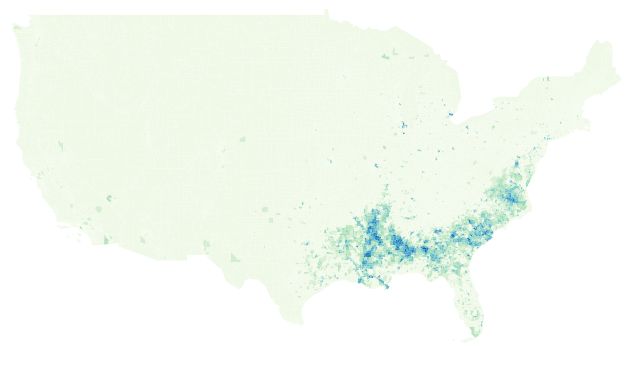 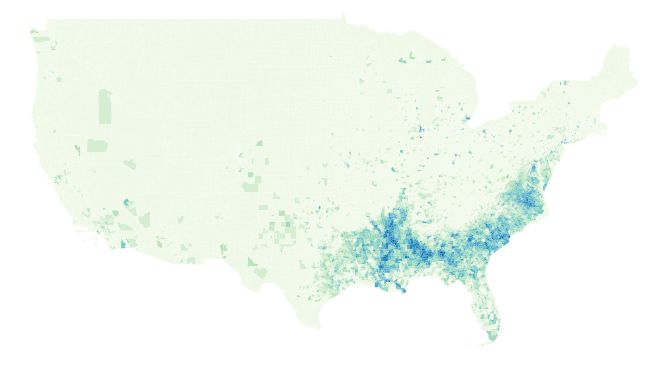 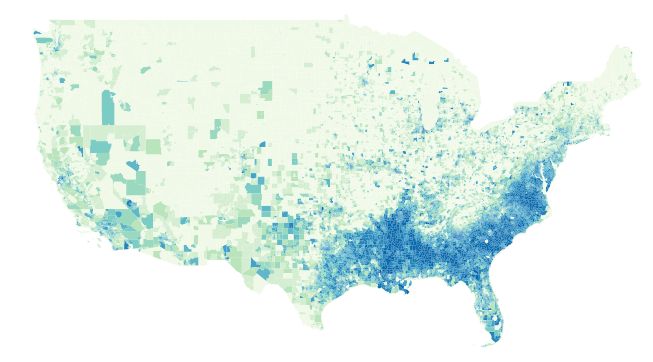 I want to give more emphasis to the tail distribution than the Jenks algorithm does, and less emphasis than percentile. 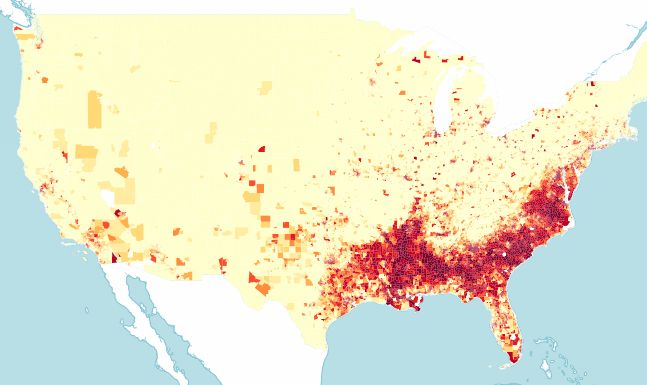 Yet another idea is to use a Sliding Percentile method. For instance, instead of using deciles (putting 10% of the data in each category) - you could use percentages like 18, 16, 14, 12, 10, 8, 6, 4, and 2. Or you could use a geometric series with a ratio of 1.1 or 1.2 between the percentile in each category. This method would balance the goals of having the data falls into different categories, and that the difference between the categories is significant.

Have you tried Head/Tail Breaks Method to generate choropleth for the same dataset. Check Out https://sites.google.com/site/thepowerofcartography/head-tail-breaks

I could use a sliding percentile system.

Say there are nine categories. One approach is to decide how much of the data tail should fit in the lowest category to ensure that it has an adequately large percent range. For instance, I might want to have 22% of the data be in first category. Then the percentile in the remaining categories could be calculated using a ratio.

I think the ratio can be calculated using ln.

Not the answer you're looking for? Browse other questions tagged cartography tilemill census data choropleth or ask your own question.