I'm running a PostgreSQL database on my local machine and have set up an connection to it from ArcMap 10.1. I can see all of my tables in the Catalog pane. There is one table that I cannot seem to load into ArcMap. When I drag it onto the map I get the error "Error Opening Feature Class, Attribute Column Not Found" 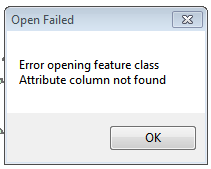 Other feature classes in the same database load without incident. The feature class is a relatively (~40 rows) small with point geometry. It loads without any problems in QGIS. Also, I can load the feature class from a query layer using SELECT * FROM [Feature Class].

So what's going on with ArcMap that I can't just load the FC straight in like I can with the other FCs in the database?

I'm running ArcMap 10.1, on a Windows 7 machine, with NO instance of ArcServer, PostgreSQL is running locally. I have the Postgres client files installed.

The table has 14 columns: 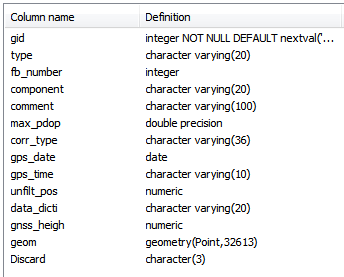 The spatial reference is 32613 (WGS 84 NAD 83 Zone 13N) and the permissions are no different than others in the database. Typically, I just drag the tables in from the Catalog pane to load them into ArcMap - perhaps Arc is building a query layer in the background, I don't know. However, when I do the drag-and-drop with this error it won't load. When I create a query layer using the "Add Query Layer..." dialog from the File menu it at least loads the points, however, I can't do any kind of selecting and the attribute table is empty.

An example of the columns for a table that I can simply drag-and-drop: 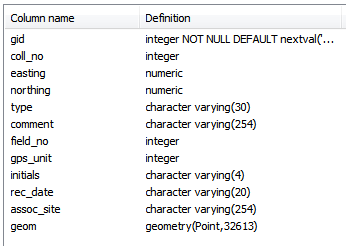 You might want to try dropping the column "Discard".

I've only just started to figure out the solution to this myself but dropping columns that begin with a capital letter seems to be working for me so far.

EDIT: I realise now that ArcCatalog will not consume quotation marks in a query layer. Seeing as Postgres works with columns in lower case and that when a capital letter is required it encases it quotation marks, you can see where the problem lies.

The solution is to ensure that all column names are lower case and that no quotation marks exist in the SQL statement.

I had the same issue going from SQLServer2012 to ArcMap. The fix I found was to remove a space in one of the column names.

Not the answer you're looking for? Browse other questions tagged arcgis-desktop arcgis-10.1 postgresql feature-class or ask your own question.

1
Using database tables with bigint columns in ArcMap query layer?
2
Could not add the specified data object to the map
3
Why does ArcMap drag and drop report "one or more dropped items invalid"?
1
Why does reading shapefile from PostgreSQL database give Error reading OID from table ...?
7
How to enable adding both feature classes / tables and layers from TOC to a script tool parameter input?
1
ArcSDE feature class prefix issue
0
DBMS Table Not Found with SQLite and ArcGIS 10.3
0
DBMS table not found error adding PostGIS layer in ArcMap?