Custom Symbols are too small in KMZ File from ArcMap

We are working with the local Police department on an iOS and Android app which will have an embedded Google map showing crime data from the past month.

This map is generated via a .KMZ file exported from ArcMap.

We created a set of custom .EMF icons for this map and the Crime Analyst at the Police Department imported them fine, but they are extremely small in the KMZ layer that gets added to the Google map.

When the Crime Analyst increases the size of the icons in ArcMap, it makes them pixelated and blurry.

Is there a simple way to retain the original size of the imported custom icons or to increase their size without pixelating them?

We have the custom icons as .SVG, .PNG, .EMF, and as a custom icon font.

Is it possible to use either the .SVG or the icon font as a custom marker in ArcGIS so that scaling will not be an issue?

That is, what you see inside ArcMap is how the output KML should look. This is the reason you need either a layer from ArcMap or a LYR file for the Layer to KML tool (opposed to just features).

For points, the symbology you have inside ArcMap gets exported as a .PNG for each layer and bundled with the KMZ. A quick test shows that whatever you "point" size is, gets doubled for the resulting PNGs. You may have to do a couple test exports untill you get the icons looking exactly as you want them. A quick test on exporting shows the point size in ArcMap vs. image dimensions on disk: 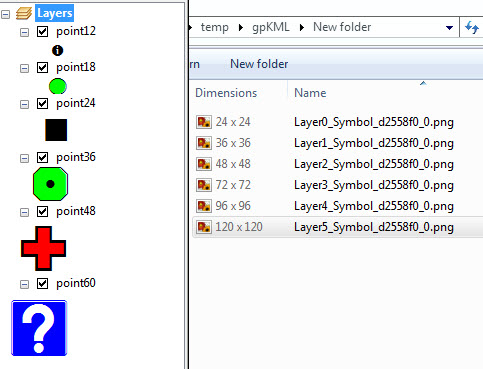 The help topic on creating KML in ArcMap is here.