How do you explain that band width and relative spectral response of MODIS band do not match?

One factor that is often overlooked is the effect of a sensor’s relative spectral response (RSR), or spectral response function (SRF), on broadband spectral measurements. The RSR describes the quantum efficiency of a sensor at specific wavelengths over the range of a spectral band. Currently, general descriptors, such as bandwidth and average bandpass, are often the only spectral characteristics considered in analysis of sensor spectral measurements. However, cross-sensor wavelength variations in RSR can lead to measurement discrepancies between sensor measurements that make them not directly comparable (Teillet et al., 1997). In order to provide consistent quantitative spectral measurements of vegetation land cover and derived metrics, such as spectral vegetation indices, the effect of a sensor’s SRF must be considered and understood.

Spectral bands are often generalized (Pagnutti et al., 2003) in terms of full width at half maximum bandwidth and central wavelength corresponding to the maximum value of the response function (Liang, 2004) as shown in Figure 11. 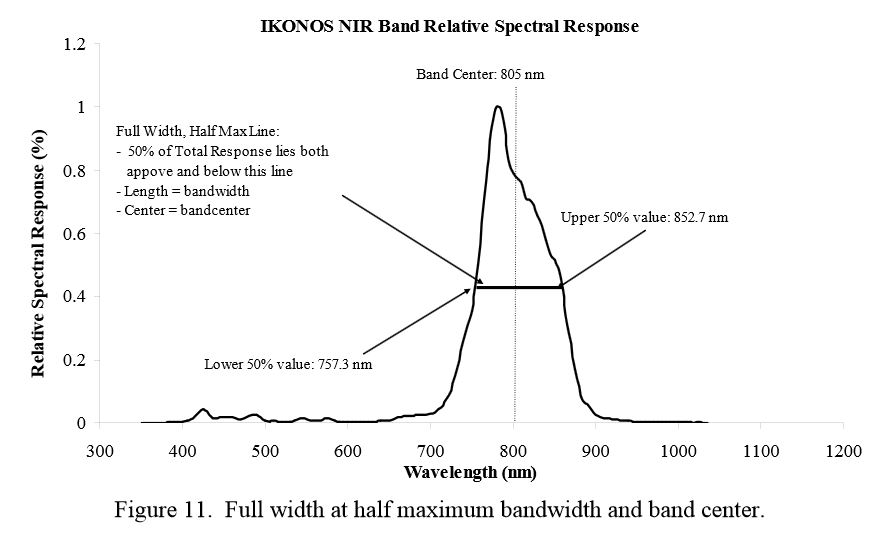 In view of this, I was a bit surprised that, for example, the bandwidth of MODIS band 7 (dotted line) as defined here, seems to not match with the relative spectral response in the way defined above. 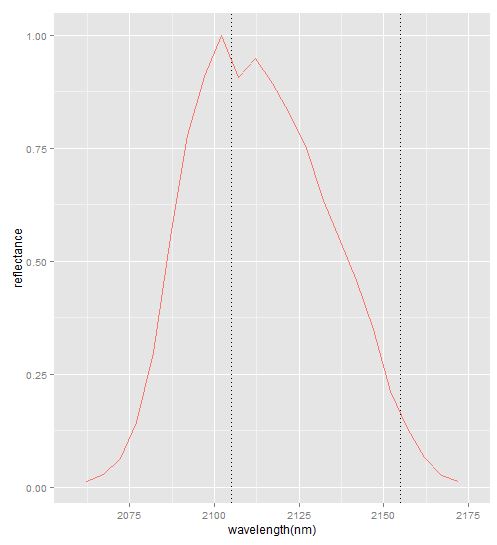 Is my understanding of these concepts incorrect?

So MODIS is a complex instrument and it has been a while since I worked with the data. So bear that in mind.

If we look at band 1, the data is pretty good: 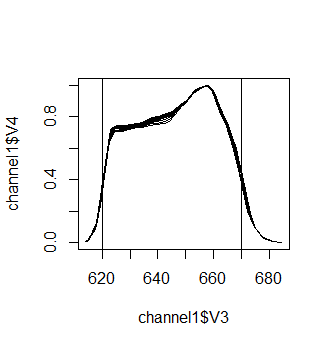 But as you point out with band 7 the data does not line up. I had to check it myself because I was certain it had to do with the different channels per band (which is why the raw RSR file have from 20-40 RSR responses) but that was not the case.

But if we look at the other file provided by NASA: ftp://mcst.hbsss-sigma.com/pub/permanent/MCST/PFM_L1B_LUT_4-30-99/L1B_RSR_LUT/pfm-in-band-rsr.pdf

And specifically at band 7. We see that the actual RAW data (the bottom graph on each page) does line up with the values provided on: http://modis.gsfc.nasa.gov/about/specifications.php

It is just the processed in band response which does not line up.

That means that the basic values provided by NASA for band 7 (7 2105 - 2155 1.0 110) are incorrect (by about 50 nm), but because they have released the RSR data we can use that to determine the real wavelength for each band. Although does that really matter? No unless you are comparing multiple sensors to each other where the wavelength and not the band is crucial, but at that point you should be using the RSR data anyway.

Answer given by Kwofu (Vincent) Chiang, one of the named contact in the raw files :

If I understand your question correctly, you are wondering why MODIS spectral specification bandwidths listed on NASA web site are different than those computed from the RSR provided at the FTP sites. The MODIS specifications page on NASA web site provides the instrument "design" specifications in general; considered it as defined specs to build the sensor. The actual spectral responses of each instrument (there are two MODIS -- PFM on Terra and FM1 on Aqua) at its sensor level were measured carefully in the lab and their detector(channel)-dependent RSRs for each band are listed at MCST's FTP sites. You should use the actual RSRs for your analysis.

Not the answer you're looking for? Browse other questions tagged remote-sensing modis or ask your own question.

3
Using Quickbird to discriminate vegetation response and spectral signatures - which season?
0
How to get MODIS data with 3 band and step to change hdf file to colored map?
1
Spectral Signature Extraction using landsat 7 and MODIS
2
How to convert an endmember collection spectral signature file from OLI sensor to TM and ETM+ sensors
0
how to calculate summary statistics and produce line plot for daily MODIS LST quality bands
2
How to match MODIS reflectance files (e.g.,MOD09GQ) with correct cloud mask (e.g., MOD35_L2)
0
How to modify MODIS subset function to download product for a specific region and time period?