I'd like to merge linestrings which touch, but do not cross. The linestrings share the same SRID and come from a PostgreSQL 9.2/PostGIS 1.5 database. Within the table I query are several line strings, not just those I want to merge, but also others.

For example, consider lines from the OpenStreetMap database. I start with a temporary table that has all linestring which are tagged as being part of the power grid, together with the respective voltages. However, not all parts of the grid that belong together are also represented as a single (multi-) linestring, they are within the database the way they were inserted. So, I need to find out which lines touch, do not cross, and share the same voltages, and finally merge them. The result will be another, shorter list containing merged lines and those which did not need to get merged with others.

Basically, it does the following: Given a list of pointers to geometries, it creates two iterators within two loops. The second iterator always starts as a copy of the first; then both travel until the end of the list. If the geometries the two pointers point to touch, but do not cross (and also share some tags), they are united.

To illustrate what it does, I've drawn a very simple picture featuring five line strings which could be a possible result of my example query outlined above. In this picture, only the three grey ones are merged: 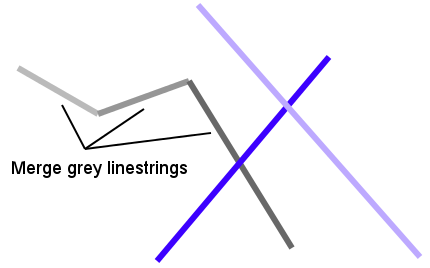 I now want to improve this approach by (a) possibly improving the algorithm and (b) putting the strain on the database server, not the slower client machine.

I've two options here, but I do not know which one is the best or which actually works:

This http://postgis.net/workshops/postgis-intro/advanced_geometry_construction.html and this http://blog.cleverelephant.ca/2010/07/network-walking-in-postgis.html provide the basics of recursively walking a collection.

Another way would be creating simple topology using PgRouting Grass example and writing something similar to this parent-child recursive query. Then use source and target column data to solve longest lines . This assumes that you want join only lines from start -> start , start -> end or end-> end . (Pgrouting may have some useful functions already done)

parent-child query is pretty simple, limit initial data to one voltage, start "walk" to tree. if call ends to situation where it would split to two paths , store existing line and start walk two new lines. I have done similar implementation to solve still connected "sinks" in network when one or more connection edges are taken out.

Performance in recursive SQL is not that good, but probably it fast enough. After you have longest lines and network only from line start -> end points, you can start to solve intersecting and touching problems ( do you need to split lines and start to create connectivity between them...)

If SQL sound too hard and you have money to spend, i recommend FME (ww.safe.com) It's nice toolbox to own when you do GIS ( file type conversion and data manipulation )

Not the answer you're looking for? Browse other questions tagged postgis postgresql c++ merge or ask your own question.

3
How do I apply Dijkstra's algorithm in Python with PostGIS data?
1
Rewriting query to match two points with linestring in different database table?
4
Merging linestrings in QGIS using PostgreSQL and PostGIS
0
PostGIS Get the POINT that is x meters away from a fixed point on the route (LINESTRING)
1
Clean the merge from some features
1
Why does a LINESTRING change in length after union with a shorter but completely-overlapping LINESTRING?
1
ST_LineSubString Query Not Giving Expected Results
4
ST_LineMerge to simplify road network