I have an area divided into polygons, and a dataset of observations which has a common field with the polygon layer.

I now would like to generate a random point for each dataset entry within the according polygon.

R was already a great help in digesting the dataset and even to produce shapefiles with summed values of the dataset, so I dare to post this here in the gis.stackexchange. It would be nice to have a solution in R, cause i have to create multiple subsets which can so easily be done there by a loop, so i do no have to filter the data manually in QGIS all the time.

Other solution are welcome as well. 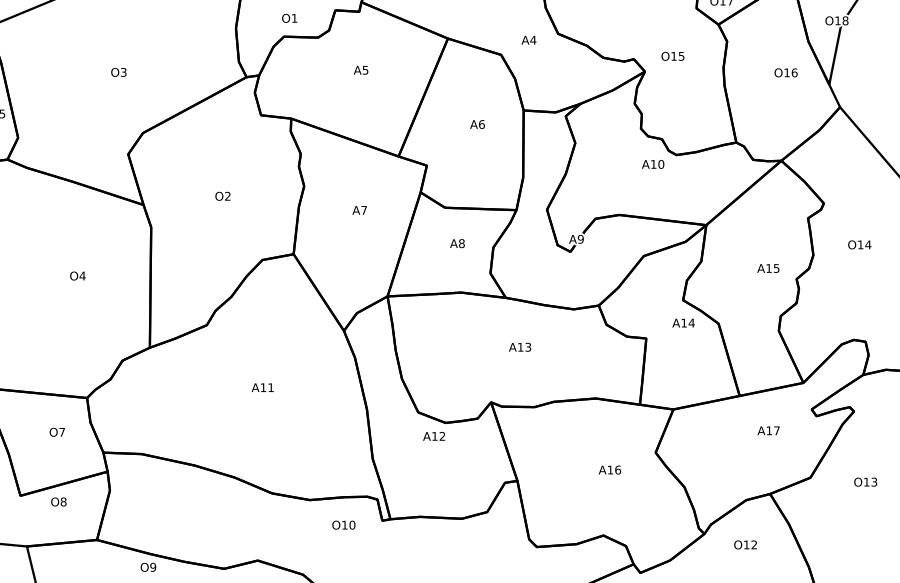 Goal: -> Having a point-shape with 1360 random points, which reside in the according polygon and have all attributes of the datalist.

See my example and answer

You can use spsample for this. You need to set the "iter" argument depending on how your polygons are shaped, but this code generates a coordinate from each polygon in the wrld_simpl data set. Using iter=10 found a coordinate for each polygon for these data (but 4 failed a few times).

Balancing the right ways of sampling in order to ensure always an intersecting point is always found may take some care, see the help page details for ?spsample. Note this is sampling in longlat so it's not exactly sensible, but that will depend on your data, not the function.

This is treating each row in the SpatialPolygonsDataFrame as an entity to sample from, so only one point per "multipolygon". There are methods for Polygon, Polygons and SpatialPolygons so it will work similarly for those with slightly different code depending on what you have.

Note that coordinates(x) will give you centroid of each polygon, but that's obviously not guaranteed to land in the shape itself. Also, spsample assumes that any holes are sensibly defined.

With that matrix each row is a one-to-one match to rows in the polygon layer, so

finishes the job, but it depends on what your objects are and how you deal with them. Record matching and transfer is pretty basic in R, but not exactly on-topic here.

I recently needed to do something similar. I had around 70,000 polygons, and around ~40 million points to place. With that in mind, a few things about the particulars of my answer:

Given these, I was able to make use of the csr() function from splancs. All i need to do is pass a bounding box (the polygon in question, using vertex coordinates list), and the number of points to generate, and it will have at.

So I'm making use of the snowfall package for parallelization. I use 4 threads. I could have used all 8, but the size of the dataset is so large I would have ran out of memory.

I use the term "geocode" extremely loosely here. What this does, is you pass in all the data for a particular polygon, as well as the polygon set. (would be faster to pass just the polygon, but i didn't optimize to that extent). It computes random XY coordinates, then attaches those XY coordinates to the data and returns it to the main program. "data" (in the complete sense) refers to the 40 million observation table that I want to attach XY coordinates to. I subset the data table because there were a few observations with malformed polygon ID's (polygon ID's which didn't appear in the polygon shapefile). Leaving them in caused an error, so better to remove.

So the way snowfall works is kind of interesting. It spawns child R processes, that are blank slates. You need to explicitly pass to them beforehand whatever you intend to work with, that doesn't get passed by "apply" (basically, everything but x). So here, that means passing the function definition, along with the shapefile. As well as importing the packages we'll be using.

All this reduces to 1 line of code. This is, however, insanely fast for this purpose. I had done this batch scattering in polygon before using arcGIS, and it took the better part of the weekend to do all 40 million observations. Subsetting by polygon then doing this scatter had the whole deal done in ~15 minutes.

At the end we are left with a list of identically schema-ed data frames. I actually still don't know a clever way to stack these, but I didn't need it in my workflow. (I pushed them back to an SQLite database, appending onto the end of the table).

I realize this is long after this question was answered, but hopefully others find and like this.

How about Vector -> "Random points" selecting "Poyid" field on "value from input field" and then "Intersect" to transfer the attributes from one layer to the other?

Not the answer you're looking for? Browse other questions tagged qgis r point-in-polygon random or ask your own question.

2
How to hand over polygon attribute to new point while digitizing?
5
How to create randomly points within polygons for each row of a dataframe matching a Polygon ID with R
4
How to insert random points with weight?
4
View or set seed value for Random point generator
1
Partition an area into polygons so that each polygon will contain at least one point of each type
1
Create random sampling point in each grid's cell
6
Function in R to get difference between two sets of polygons comparable in speed to QGIS