I have a polygon and I'd like to find the radius of an equivalent circle from a particular point within the polygon. The polygon would have a large (infinite) number of points evenly distributed accross it. I am working in QGis so if there's a solution for this it would be great.

Or, to put it another way: What is the average distance from a point in a polygon to every other point within the boundary of the polygon? A circle, I believe, would give the shortest distance, but a rectangle with one long edge and one short edge would give the longest distance. 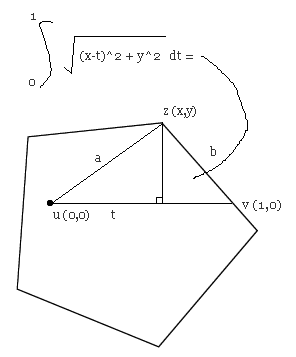 The question appears to ask for the mean distance between a point and a polygon. The answer is surprisingly complex. We need to decompose the calculation into simpler ones, as follows:

I won't provide examples or more details because at this juncture you might start questioning why you want to do this calculation. (However, as a simple application you can now easily confirm the statements made on the MathWorld site concerning average distances in equilateral triangles.)

In many applications, the circle whose area is the same as the original polygon will serve well and is easily found: its radius equals Sqrt(A/pi) for an area of A.

Comments suggest a different interpretation of the problem was intended: it is about polylines rather than polygons. Specifically:

What is the mean distance between a point z and a polyline Q?

If this cannot be computed, that is because z lies along the line from u to v (that is, y = 0); in that case, use the following expression (and multiply it by the square of the distance from u to v): 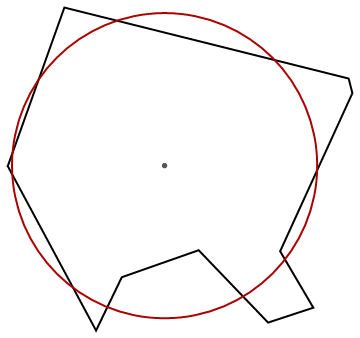 Another approach is to estimate the mean distance by means of a Monte-Carlo simulation. This requires placing N points independently and randomly into the polygon P and averaging their distances to z. Usually, such points are developed using rejection sampling: random coordinates are generated within the polygon's bounding box and retained when they lie within P.

The issue with this approach is that the random sampling limits precision: there will be some statistical error in the answer. Let's analyze it. If the maximum distance from z to P is D and the minimum distance is d (equal to zero when z lies inside P), then the variation in distances to z from random points in P (measured as a standard deviation) cannot exceed (D - d)/2 and is likely to be only around half that, depending on the shape of P and the position of z relative to it. The standard error of the mean distance (call it m) therefore is of the order (D-d)/(2Sqrt(N)). To construct the "equivalent circle," we must use a radius of 3m/2 (because the mean distance to the center of a circle of radius r is 2r/3: another exercise in integral calculus). Therefore the standard error of the circle's radius cannot exceed 3(D-d)/(4Sqrt(N)), which is roughly the diameter of the polygon P.

On a computer screen the polygon's diameter will typically be one hundred to a thousand pixels. To be reasonably sure of getting the size of the "equivalent circle" visibly correct, then, we might ask to reduce the standard error of its radius to less than one pixel. Due to the Sqrt(N) in the denominator, that will require N itself (the number of random points in the simulation) to be around 100^2 = 10,000 to 1000^2 = 1,000,000. That's a lot of random number generation, point-in-polygon testing, and distance calculation. Expect the simulation--and therefore the calculation for a single polygon/point pair--to take seconds to minutes.

Thus, the Monte Carlo approach is feasible for one-off calculations but for large numbers of polygons or polygon/point pairs, you will need to use the analytic approach previously described.

Not the answer you're looking for? Browse other questions tagged qgis polygon distance circle or ask your own question.

5
Plugin for average distance from node to polyline in QGIS?

5
Plugin for average distance from node to polyline in QGIS?
6
WGS point to WGS line segment (great circle) distance
4
Finding average distance within polygon to point?
7
Creating a point on edge of closest polygon
3
Achieving the opposite of the shortest_line() function in QGIS?
3
Distance from edge of each polygon to nearest point, such that points within each polygon aren't included
1
Circle is ellipse using OpenStreetMap
4
Calculating distance between points only within same polygon in QGIS
4
Creating circle-like area that encompasses original polygon