How to specify relationships (foreign keys) in a spatially enabled database for census geography?

Lets use the Canadian census geography design as an example: 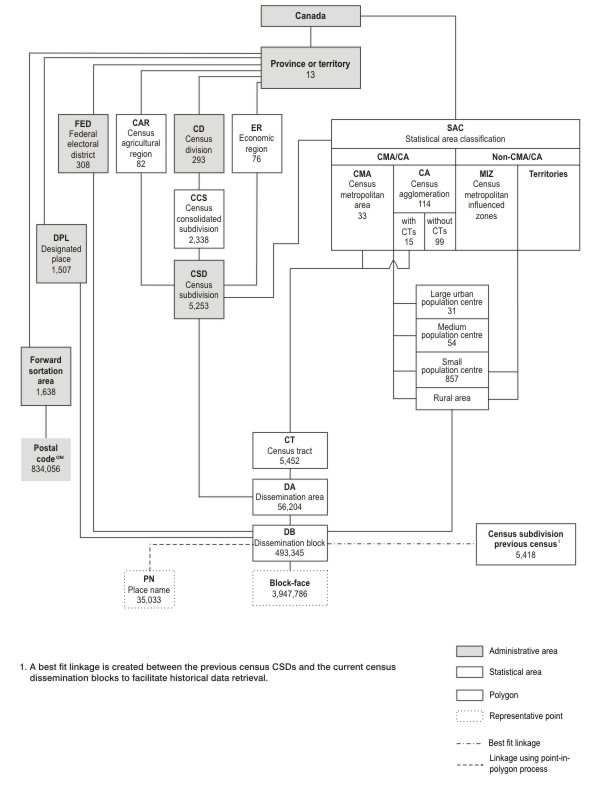 In my experience, a spatially enabled database for census geography can be created in two ways:

This is likely a battle between storage space and computation time:

One could argue that PK/FK relationships are nonsensical and one should rely on spatial joins instead of creating mundane long-winded join statements, or redundantly storing FKs all over the place.

Can anyone shine any light as to how geography of this nature would be stored in a spatially enabled database?

Firstly, I want to clear up the fact that using proper Foreign keys doesn't impact database size. I know that you haven't said that in your question, but I still want to make that point.

If we are talking about database size, this has an negligible effect on the database size. The table structure and metadata is orders of magnitude size smaller than the contents of the table. It might have an impact on the processing speed, while doing inserts, but even that is worth it, for the data integrity that you get.

This has the benefit that the information in not repeated. There is one authoritative representation of the fact of which city lies in which state. Using an Hierarchical query you can find this information. Tomorrow if one of the state is divided into two states, you would only need to add the new state in the states table, and change the appropriate foreign keys in the County table. The Cities will automatically fall into the new states. This way your table is free from an update anomaly.

If Each geography contains a foreign key of every geography above it, then you will run into problems, because you will have to change this information in all lower tables. From a Database point of view, your table is not in third normal form.

One could argue that PK/FK relationships are nonsensical and one should rely on spatial joins instead of creating mundane long-winded join statements, or redundantly storing FKs all over the place

I'll like to stop you from doing this blunder by point out the huge problems with this.

You raise an important point when you say that

Storing all related/nested geography FKs allows us to extract data without having to create many joins.

I agree that not having to do too many joins is a good thing, but there are other ways of achieving this.

What I have said so far, is about the storage of the data, and not the way in which it is presented to the user i.e its Display & Visualization.

You could have views, which give you the required information, and you could query against the views. You could also make materialized views which cache this information, if your data doesn't change much.

This was all in an ideal, theoretical situation. In most practical databases, the databases are almost always never fully normalized. This can be due to several reasons.

Not the answer you're looking for? Browse other questions tagged spatial-database census or ask your own question.

3
How to design a database for continents, countries, regions, cities and POIs?
12
Spatially enabled Postgres database
1
Source for all census tables available at each census geography/summary level
2
How to find ZCTA for the 2010 Census block code?