Publishing Geoprocessing Service with importing of numpy in ArcGIS Server?

I use a lot of scripts as GP Service almost all use the arcpy functions but one (and very important) of my scripts needs a gdal/ogr and numpy imports. I can run this script in PyScripter or as a tool in Toolbox in ArcMap. Now, I am trying to publish my script from GP Result window as GP Service on ArcGIS Server 10.1. This is weird because I can see only Packaging in progress window a long time and after 30 minutes I must kill the Service Editor. I tested my script by commenting it line by line and publishing each time as a GP service. I have already found the reason of my problems but still I do not have solution. The publishing problems appear when I use import of numpy in my script (import numpy as np or import numpy). Does anyone know the reason of this state? Numpy is very important library so I think the solution should exists.

I have tested my simple script

It runs in ArcGIS for Desktop but I can not publish service. I always get window Packing in progress 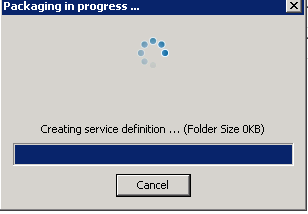 When I comment out import as np I can publish service successfully.

The asker (@ConeGIS) has indicated in a Comment that this went away when:

Can you check and make sure that the 64bit version of numpy is also installed on the server machine. I believe that 10.1 Desktop uses 32bit Python and Server uses 64bit. If numpy isn't install on 64bit that could be the issue.

Not the answer you're looking for? Browse other questions tagged arcpy arcgis-server numpy geoprocessing-service or ask your own question.

2
Publishing Geoprocessing Service with ArcGIS Server?
0
Converting arcpy based python script to OGR for semi-automated Metadata creation
2
Can you script publishing a GP service?
3
How to run OGR in ArcGIS Scripts?
3
How to work with OGR and GDAL in GP Service in ArcGIS for Server 10.1
7
Conflict between ArcPy and GDAL/OGR?
1
In_memory workspace in geoprocessing services
2
Installing ArcGIS Desktop on web server?