How to create linestrings with a definite angle and length, that are fixed to a point

I want to create linestrings with a definite angle (e.g. 160°) and length (e.g. 2m) that are fixed to a number of points of another linestring. So, I want to use the ST_DumpPoints function to find the points and bind the created linestrings to them. Is there a way to declare an angle (α) during the linestring creation? Here is an example picture: 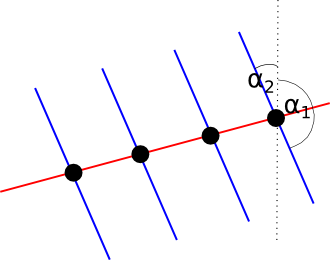 I want to create the blue linestrings.

The answer from Evil Genius helped me calculating the maximum width of a polygon with a given aspect.

You could accomplish this a few different ways depending on what sort of output you are wanting, but the concept is the same. It's generally easier to do a simple rotation followed by a translation rather than trying to calculate the coordinates in a single step.

In this case, the basic steps are:

The following PostGIS view creates the lines from your example scenario. A few things are assumed:

If you are using PostGIS 2.0 you can simplify this since you can specify a different origin for ST_Rotate. If you want to rotate to an angle based on the slope of the line, you'll have to calculate that first and add it to the rotation angle.

If the data isn't projected in the same units that you want to measure in you can still do something similar, but you'll need an extra step:

I now understand what you mean by the angle. Essentially, you want a rotation clockwise from the Y axis (0 is up, 90 is right, 180 is down, etc.).

You do still need to use the radians function since ST_Rotate expect the angle in radians. You should be able to get the correct angle with two small changes:

Not the answer you're looking for? Browse other questions tagged postgis postgresql point spatial-database linestring or ask your own question.

13
Calculating maximum distance within polygon in x-direction (east-west direction) in PostGIS?
7
Generating series of ellipses on line using ArcGIS Desktop?
2
How to find the destination point given a start point, distance and bearing?

6
How to merge linestrings that don't touch based on common name?
5
Given 2 LINESTRINGs with common point, how to extract common point?
6
How to create a buffer on a linestring with varying or increasing/decreasing width
6
Calculate distance between point and linestring and how to represent that on QGIS?
2
How to find a point on linestring and in a range of 10 meter
5
How to use ST_Difference to create linestrings from non-intersecting polygon boundaries?
2
How to segregate dumped points?