How to transform data points from WGS84 to NAD27?

Preface: I have a set of lat and long data points from Google Maps, which I believe are in WGS84. My project data is in NAD27(BLM14). These points are in West Texas, where NAD27 differs from WGS84 by about 50 meters. Using QGIS, I loaded my shapefile into one layer and set the CRS to WGS84, then I loaded the same data again and set its layer to NAD27. I was hoping to see a difference between the two layers, but I saw none. (I zoomed in to 47:1.)

Question: Did I actually transform my data points from WGS84 to NAD27? If so, shouldn't I see a discrepancy? I checked the properties of the layers, and one says +datum=WGS84, while the other says +datum=NAD27. Am I missing something obvious? (I never took any GIS classes in school, and I've only been working at this for a few weeks.)

Should I use the NADCON converter at http://www.ngs.noaa.gov/cgi-bin/nadcon.prl to convert my WGS84 coordinate data to NAD27? Or is there a QGIS or (better) an OSGeo solution?

Did I actually transform my data points from WGS84 to NAD27?

Not really. Assuming your original coordinates are actually WGS84, you just assigned an erroneous CRS of NAD27(BLM14) the second time you imported the data. Assigning the CRS does not transform the data.

I was hoping to see a difference between the two layers, but I saw none.

You may have on-the-fly transformations on for your project. If so, your WGS84 points were automatically reprojected (or projected in this case) to NAD27(BLM14). Turn it off (under Project Properties -> CRS) to see the actual differences.

To more clearly see the difference, relative to your Google Maps points (which may be in a different CRS), load the layer, defining it as having a CRS as WGS84 (probably accurate), then right-click on the layer and choose Save As..., defining your project CRS of NAD27(BLM14) for the resultant file.

Turn off on-the-fly transformations for you project and load the saved NAD27(BLM14) file in. You should see the difference between the projections, i.e. your ~ 50 meters.

You can also use command line utilities to convert your coordinates:

One way to use gdaltransform is to start a terminal session (OSGeo4W if you are on Windows) and interactively execute:

will return the corresponding coordinate in NAD27,

or, depending upon your platform, you may use stdin/stdout redirection as follows,

This way, if you construct your lon/lat data as a csv with one coordinate pair per line, like,

If you have 'On-the-fly-reprojection' enabled, you should see the difference between WGS84 and NAD27 for the same coordinate pair: 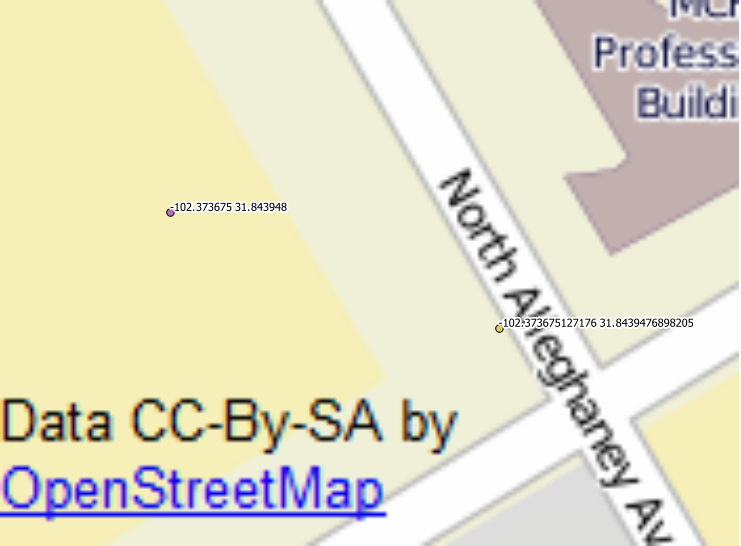 But note that you should use EPSG:4267 NAD27 for this, and not EPSG:32064 NAD27-BLM14, which has US feet as units. This will only work in the area of validity of NAD27, that is Northern America. Points in other parts of the world will coincide, as there is no offset definition for them.

The first sentence you wrote perhaps is wrong that the lat long taken from Google maps are not in WGS84 rather they are in NAD27. That is why you dont see any difference.

Not the answer you're looking for? Browse other questions tagged qgis coordinate-system osgeo or ask your own question.

9
Which CRS to use for Google Maps?
3
Proper gdaltransform syntax to transform a list of coordinates?
2
NAD27 to WGS84 with proj4js

3
Converting/transforming coordinates from ETRS89 to WGS84 UTM 36N in QGIS
1
Converting datum?
1
How to Transform Many Projections Into One With SQL Server
2
Latitudes and Longitude Differences Based on Different Datums
1
Unable to project GPM precipitation data correctly in QGIS?
2
Transform coordinates in csv file from wgs84 to nad27 using qgis
2
Projecting NLCD data as WGS84 using QGIS?
4
Performing Esri NAD27 to WGS84 datum transformations with ST_Transform in POSTGIS
2
Problem with custom Projection