As I don't want this just to be a blackbox, I'm trying to understand the different rasters this script produces. One of them is outdrop-raster, which is a by-product of flow direction raster. According to ESRI:

"The output drop raster is calculated as the difference in z-value divided by the path length between the cell centers, expressed in percentages. For adjacent cells, this is analogous to the percent slope between cells. Across a flat area, the distance becomes the distance to the nearest cell of lower elevation. The result is a map of percent rise in the path of steepest descent from each cell."

..which seems reasonable. The problem is, that there are several numbers which pop out. For example 16,666.. % and 25 % are by far the most common numbers, why? I'm sure there is an explanation for this, but I just can't figure it out. It doesn't seem logical to have continuous elevation (thus slope) data and results that are not (that) continuous. Original data is low-density LiDAR DEM (2 m pix), values are 32 bit float (197.132, 198.013 m etc.). 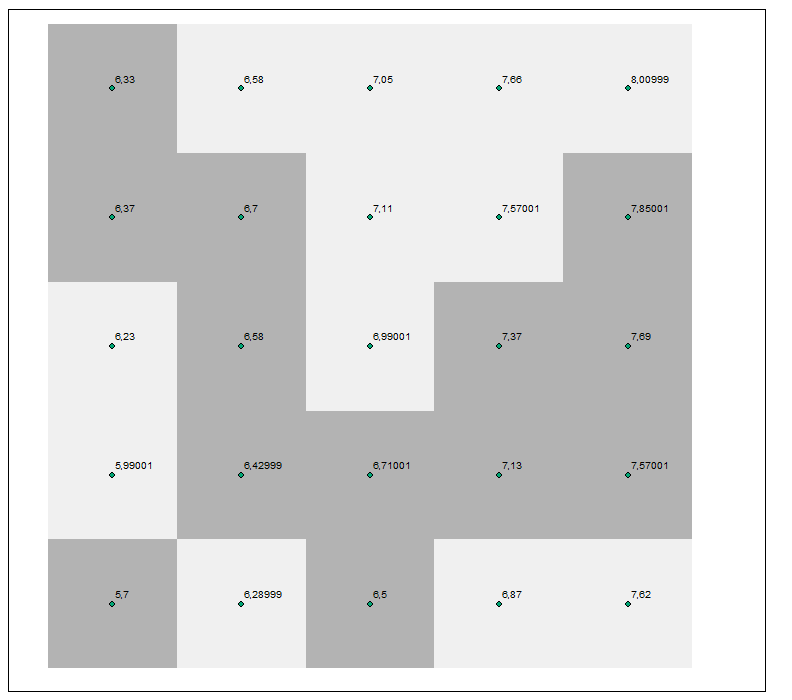 5 by 5 example, darker gray equals flow direcetion to lower left and percentage 16,666 % drop while lighter gray here has 25 % drop and flow direction to the left

Not the answer you're looking for? Browse other questions tagged arcgis-desktop raster spatial-analyst direction flow or ask your own question.