I'm getting my but kicked by some statistical analyses in ArcGIS 10.2 and need a bit of assistance.

I have two data sets. One is a raster which represents the population of a country at 100m resolution, the other is 35k related points. Both population and the arrangement of points vary widely over space. From these two data sets I need to derive the following:

I have virtually no background in statistics - It appears as though I'm in a bit over my head at the moment and need a hand staying afloat.

You need to compute the total population within all possible distances, plot them together, and interpolate within that plot.

I will illustrate using population for the District of Columbia (USA) represented on a 10m grid. It begins by computing the population density (the units do not matter; I used people per acre) and converting that to a grid. For the purposes of the density computation, obtain accurate areas (perhaps by projecting the original data using an equal-area projection). For the conversion to grid format, however, use a projection suitable for accurate calculation of distances. 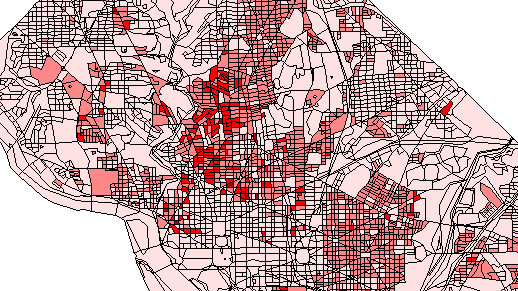 Next, compute the Euclidean distance grid to your points. Here is a map of the population density grid hillshaded according to the distance grid to a few hundred randomly located points. (You cannot see the points at this resolution, but their locations are evident as the cusps of the "valleys" in the hillshade.) 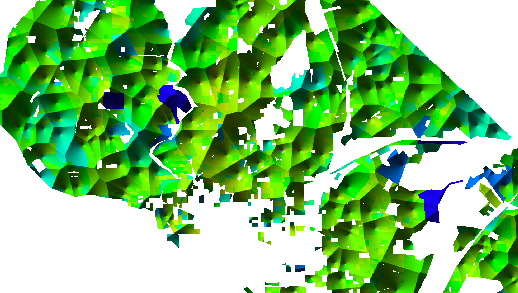 Population densities graduate from blue through green to yellow.

Third, discretize the distance to create zones to summarize. This procedure is done by dividing the distance by the zone width and truncating (using the int or floor functions). A zone width less than the cellsize is unnecessary, and likely a much greater width will yield acceptable accuracy and improved calculation times, so start with a large width--maybe a few kilometers at a country scale--and narrow that if the results are too imprecise. For this example I used a width of 10 meters (the cellsize). (No illustration is needed because the zone grid looks almost exactly like the distance grid.)

In this table, Value is the zone identifier: 0 for 0-10 meters, 1 for 10-20 meters, and so on. This was multiplied by 10 and then 5 was added to produce the calculated Distance column representing a typical distance within each zone.

Similarly, we can read off the other percentiles:

For working at a country wide scale, these calculations can be tiled into smaller grids. Carry out the work for each tile (using distances to all points, whether or not they are located within the tile) up to the point where the zonal summary table is obtained. Afterwards, combine all the zonal summary tables by adding their values across rows: for each distance zone, there will be one sum for each tile and adding these gives the total population in that zone for all tiles. Generate the percentiles from this combined table.

One advantage of the tiled approach is that a different projection can be used for each tile, allowing more accurate calculation of distances. To do this, create the tiles using a fixed projection for the country, then reproject each tile (and all the points) to its local coordinate system for doing the distance calculations and zonal summaries. You may safely throw away these reprojected grids after they are used.

Not the answer you're looking for? Browse other questions tagged arcgis-desktop spatial-statistics arcgis-10.2 or ask your own question.

1
How to do point-to-point near analysis conditional on common attributes of the two layers in Arcgis 10.2 (advanced)
2
Connect point to closest feature in ArcGIS 10.2
3
Implementating Analytical Hierarchy Process with ArcGIS 10.2 for Desktop?
2
Join nearest points from 3 differentfeatures in ArcGIS 10.2
0
ArcGIS compute nearest network neighbour for each point
1
Image classification from “Imagery” basemap ArcGIS 10.2
1
Cost Distance interpretation in ArcGIS 10.2
5
Distance of points to nearest polygon edge in ArcGIS 10.2
1
Seeking ArcGIS Pro tool to calculate network distance from point to nearest line?