Does anyone know of a source for an Arctic EPSG:4326 map projection?

Obviously I'm a GIS newbie, so gentle pointers in the right direction appreciated!

It's a long story. I have some arctic ice data that I'd like to visualize with Tableau 8.0 which accepts external wms maps, so long as they're EPSG:4326 (Plate Carree) projections.

Obviously such a projection tangent to the equator won't work for high latitudes. But there's nothing that says you couldn't do a mercator-like projection using the prime meridan as the 'equator' so that close to the pole x-y placements would be reasonably accurate.

If such a thing existed I could upload it into Tableau 8.0 and plot my points. Or, if there was a recipe for reprojecting an existing map into this format using grass or gdwalp or some such I could do it myself.

Anybody ever hear of such a thing? Or have any advice?

It is basically possible to do what you want, but not the easy way.

I did the following with QGIS:

Restricting the manipulation to the northern hemisphere, I clipped the Natural Earth's land polygon and degree grid to positive values of latitude. Then I created a custom CRS for laea projection centered on the North Pole:

and reprojected the data to it.

In a second step, I created a similiar laea projection at 0°E/0°N:

and assigned it to the data from the last step. Note that I did not reproject the data to the new CRS in this step!

Then I reprojected that dataset back to WGS84, which puts the North pole into the middle of the Atlantic.

This is the picture I got: 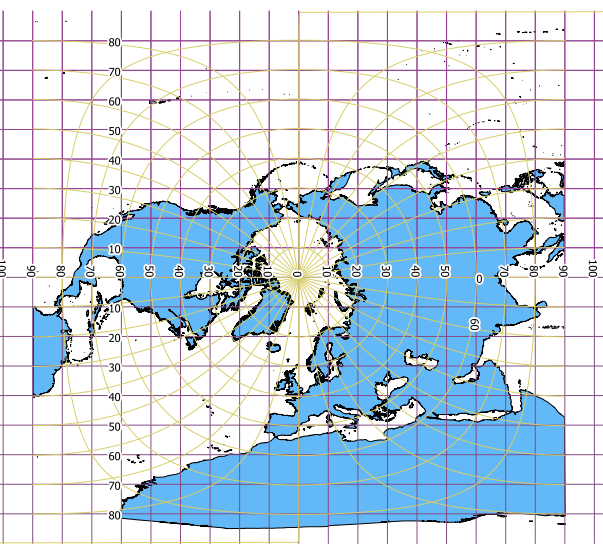 I included the new degree grid in purple and the traditional grid in light green. The result is obviously useless around the equator, but should be usefull around the north pole.

A very simple reprojection from Greenwich coordinates to North pole coordinates using a sphere would be:

With Eg and Ng degrees East and North in Greenwich coordinates (EPSG:4326) En and Nn degrees of a geographic Coordiante system centered at the north pole.

This will give you concentric circles for the Greenwich latitudes.

I think you're out of luck.

The UTM style, Plate Carree seem to be rectangular projections, with lat, lon stretched out, basically, onto a square map. Think about it, you have a set up numbers recording points along the top of the image, the rectangle like this: http://upload.wikimedia.org/wikipedia/commons/8/83/Equirectangular_projection_SW.jpg and you're hoping that the software will know that the points all along the top of that map are coincident. You are asking a user-friendly, simple bit of software to do something quite hard! I think you need to be looking into specialist software. R is good and free, but hard. A GIS like QGIS, or GRASS or ArcGIS for example will handle this flawlessly.

Not the answer you're looking for? Browse other questions tagged cartography coordinate-system or ask your own question.