Geoprocessing Service based on Python Fails with IOError: "SDE" does not exist Failed to execute [closed]

I have a Python Script that inserts X,Y Point in the SDE Point Feature Class. It works fine when executed in ArcMap 10.2, but it fails with IOError when published as Geoprocessing Task service in ArcGIS Server 10.2 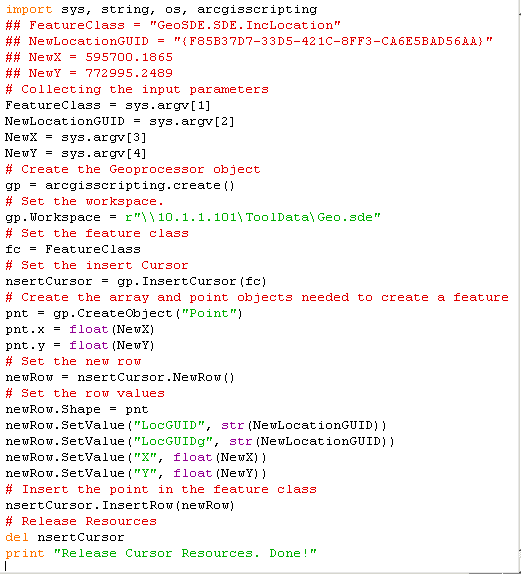 It does not make sense to me why!?

Any ideas what might be and how to fix it?

First of all, I am not sure if publishing a script that works directly with arcgisscripting is a good idea. I would recommend using arcpy instead (yes, it does go to the arcgisscripting and uses it, but I believe there is some logic that encapsulates this process and makes it work nicely when publishing a GP service in Server 10.1+).

Second, you are exposing a FeatureClass as a parameter, however, a feature class object cannot be used directly in the GP service as an input parameter. Your alternative is to either hard-code it as:

or use os.path.join (you would need to get just a name of the fc from a user, not the full path, or parse the full path and obtain just the name of fc in the code):

This is the approach recommended and I use it myself, it works fine.

In details how to hardcode the FeatureClass parameter as a constant value input:

Not the answer you're looking for? Browse other questions tagged arcpy arcgis-server geoprocessing-service python-toolbox or ask your own question.