How do I know the cause of my spatial error?

A (probably?) very basic question about spatial error it's about time I knew how to think about and answer correctly.

I have some data plotted from XY coordinates. I look at them and it turns out they appear in places where they shouldn't -- but only by a little bit. E.g. in the image below, the points appearing on land along the sides should be in the water. 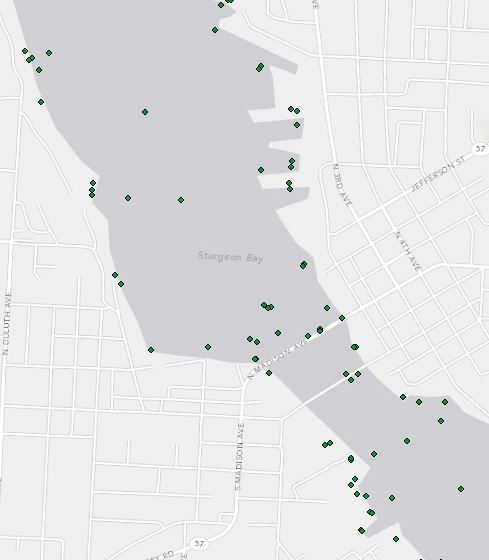 1). Because I've incorrectly defined my coordinate system somewhere along the way? (I'm not sure if the original coordinate system of the points is known). But then, wouldn't they be astronomically off target, not by just 40 meters? Plus, it doesn't look like shifting them all in the same direction would fix the issue.

2). Because the resolution of the base layer doesn't capture the shoreline well enough and the points end up looking like they're on land? I've tried it with several sources for the background and none seem to match.

3). Error inherent to the GPS unit used to capture the points? I thought 100+ meters was a little high for anything above recreational-grade.

How do I know what's causing this? Have I done something wrong (#1) or is this sort of thing inevitable sometimes? How do I adjust for it to represent these points correctly, or verbally state an appropriate caveat about the accuracy?

Any of the possibilities you've identified is possible, and resolving the problem will require detailed analysis.

If the data was collected a long time ago, then Selective Availability could give you the sort of GPS-derived errors you're seeing. Older GPS sets weren't as good, especially the presence of multipath. While unlikely, if all the points were collected on a day with nasty ionospheric conditions (e.g. during impact of a mass-coronal ejection), that could also be a contributor. Investigating the history is probably the only real option here.

Clearly the map isn't really high resolution, and a better map could help. Given that you've already tried that, there could also be a difference in the Coordinate Reference System (CRS) you're using for showing the map vs showing the points (e.g. there are 10s of metres difference between NAD27 and WGS84 or NAD83). You can project them to a common CRS, but you have to make sure that you're projecting from the right CRS. This might take some experimentation with choosing a source CRS, and you run the risk of introducing experimental bias.

Not the answer you're looking for? Browse other questions tagged arcgis-desktop arcgis-10.0 coordinate-system alignment or ask your own question.