I am using Qgis 2.1 ver. 5f5cd4c (64 bit version on win7 64) OSGeo installed. I was trying to reclassify a DEM in EPSG:32614. I used the SAGA's Reclassify algorithm in the processing toolbox. I defined that I wanted to use a simple table, defined the table and that I wanted the reclassified grid saved to a tif file. I also wanted the resulted reclassified DEM to be opened after the algorithm finished the calculations. This is what I am repeatedly getting: 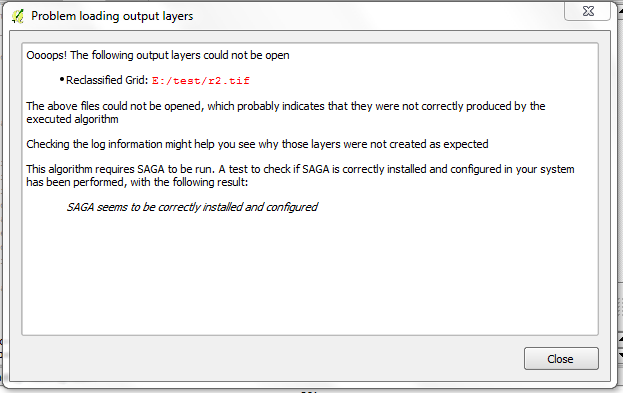 I tried to open a new project and load the resulting raster manually, but Qgis does not recognize it as a valid raster data source:

I was able to open the file and convert it to GeoTIFF in SAGA. I wonder if I am missing something in the reclassifying procedure, or something related with the format of the resulting raster. Thanks in advance for any advice.

PS. I was able to use r.reclass to do what I wanted. I also tested the saga reclasify algorithm in other two installations and I have the same problem.

3
How to reclass a raster with reclassify grid values in QGIS?