Can anyone explain, as simply as possible, how to calculate the visible sky percentage?

I have done a satellite survey and have worked out the height of buildings and the distance between them.

How do I use that data to calculate the visible sky percentage according to where I was standing?

We usually have data concerning where the ground is, so we have to use that. The ground determines a solid figure in 3D. You project this figure radially onto the unit sphere centered at the viewer: this maps the ground onto a region in the sphere. Compute the area of the remaining region: that's the solid angle subtended by the sky (in steradians). Divide it by the total area of the sphere (equal to 4 pi) and multiply by 100 to get the sky percentage.

If you prefer a more vivid explanation, put the viewer at the center of a small spherical bubble and ask her to paint over the sky. Divide the amount of paint she uses by the amount needed to paint the entire bubble and multiply by 100.

In reality there are some not-so-simple technical details.

The projection onto the sphere is fairly straightforward when the ground is given as a triangulated network (a TIN), because you only have to write code to project a triangle onto a sphere. When the ground is given as a gridded elevation model (a DEM), you can conceive of each grid cell as a 3D quadrilateral. You might break that into two triangles along a diagonal and map each triangle onto the sphere. In either case you're left with a collection of projected triangles on the sphere. By projecting the sphere onto a map (e.g., with a stereographic projection) the aggregation of these triangles into a polygonal region can be reduced to a standard problem of plane computational geometry (using a plane sweep method, for instance). The rest is easy (for a GIS).

This image shows a small city of simulated skyscrapers in a gnomonic projection centered at a viewer downtown looking straight up. The GIS can "merge" (form the union of) the polygons representing the sides and roofs of these buildings and then compute the area of the (white) space remaining. A gnomonic projection was chosen because the straight architectural lines are rendered as line segments rather than curves. 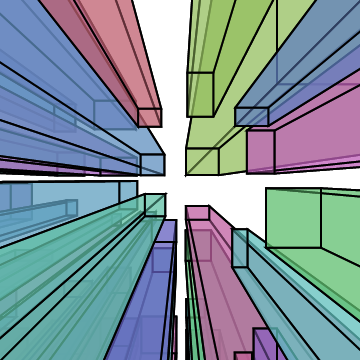 A GIS can be placed into service to do this calculation when you have just a ground and buildings. The buildings are most likely available as collections of rectangles. A vertex of a rectangle has Euclidean coordinates (x,y,z) relative to a viewer. Convert those to spherical coordinates: that is, latitude and longitude. Create a polygon for the converted rectangle. Do this for all rectangles for all parts of all buildings, resulting in a "polygon feature layer". Then, in the GIS, (1) compute the set-theoretic union of the features, (2) calculate the resulting area, (3) subtract this from half the surface area of the earth (the other half is for the ground), and (4) divide by the whole area of the earth (multiplying by 100 to get a percentage). The computational effort is proportional to N*log(N) where N is the number of vertices. The accuracy depends on how well the GIS represents the rectangles (you might need to break rectangle sides into sequences of more closely spaced vertices). Depending on your accuracy requirements, you might consider Monte-Carlo based approaches (e.g., the ray tracing advocated in another reply) once you have more than several hundred thousand vertices--that is, once the viewer is completely surrounded by (and can see parts of) tens of thousands of buildings :-).

Here's an answer that comes from the computer graphics world rather than GIS -- hence, it's a description of an algorithm rather than instructions for which tool(s) to use.

Definition: a ray is an origin + a direction; it is the line that begins at the origin and continues to infinity along that direction.

You need the following basic ingredients:

The exact formulas to implement for ray tests depend on how you represent "the ground" (a perfect sphere? terrain?) and "a building" (an extruded rectangle? a full 3D model?). For simple geometry, they're easy to find and easy to implement. (e.g, search for "ray cube intersection").

In any case, from there the answer as to % of sky visibility from a point is trivial: Fire off a lot of rays with random directions from your query point. The proportion of sky that is visible from your test point is equal to the number of rays that did not hit a building or the ground.

The answer is not exact, but you can compute it to any desired level of precision by just adding more rays.

As describe above, it's not necessarily very fast; but there's a huge body of well-documented optimisations you can apply.

(I would expect that, for calculating sky visibility across a number of points and the same buildings dataset, this approach would blow reprojection-based approaches out of the water after the addition of a simple spatial index.)

The sky-view factor (SVF) is defined by the part of the visible sky (Ω) above a certain observation point as seen from a two-dimensional representation (see figure a). The algorithm computes the vertical elevation angle of the horizon γi in n (eight are presented here) directions to the specified radius R (b).

Sky-view factor has been proposed to overcome the drawbacks of the existing visualization techniques, for example, directional illumination problems in analytical hill-shading.

The most convenient measure for expressing the part of the visible sky is the solid angle Ω. This is a measure of how large an object appears to an observer. The solid angle of an object is proportional to area A of the object’s projection onto the unity sphere centered at the observation point.

SVF ranges between 0 and 1. Values close to 1 mean that almost the entire hemisphere is visible, which is the case in exposed features (planes and peaks), while values close to 0 are present in deep sinks and lower parts of deep valleys from where almost no sky is visible. SVF is a physical quantity (if we do not manipulate elevation data by vertical exaggeration).

A free tool for computing SVF (and more) is available at http://iaps.zrc-sazu.si/en/rvt#v

Ecotect (now an AutoDesk tool) enables you to do this. More generally, this is frequently examined in the area of daylighting and a tool from this field might be easier to use, than GIS. (Though I have heard of a GIS plugin that can do this and calculate solar exposure, but I've never managed to find it).

In GRASS GIS version 7 (actually not stable) there is the command r.skyview (based on the command r.horizon, available also in the stable GRASS v.6).

It reads a raster image representing a terrain model, with pixel value corresponding to terrain feature heights (e.g. building heights) and calculates, for each pixel, the "skyview factor".

You need first to convert your data (unknown format) to a raster dataset.

1
Using SRTM data, how to get the coordinates of the peaks visible from a location?
5
What information is needed to determine the section of the earth's surface visible in a photograph?
3
ArcGIS Viewshed without Observer Points
4
Calculating the visibility of an observer walking a line transect
4
Calculating change between two sets of district lines?
1
Query 200-300 viewshed rasters from a vector layer with z-values with QGIS