How to smoothly join two rectangles

I am looking for the Math and steps involved not using a tool. We have PostGIS but its an old version so we are working with the data in Python.

I then join them to form a line.

I then build buffered polygons around each line segment (20NM) - resulting in two rectangles. If there was another coordinate I would have 3 rectangles and so on.

This is what the output looks like when the rectangles are assembled:

However, what I really want is to have that triangular gap - sealed up with a curve. 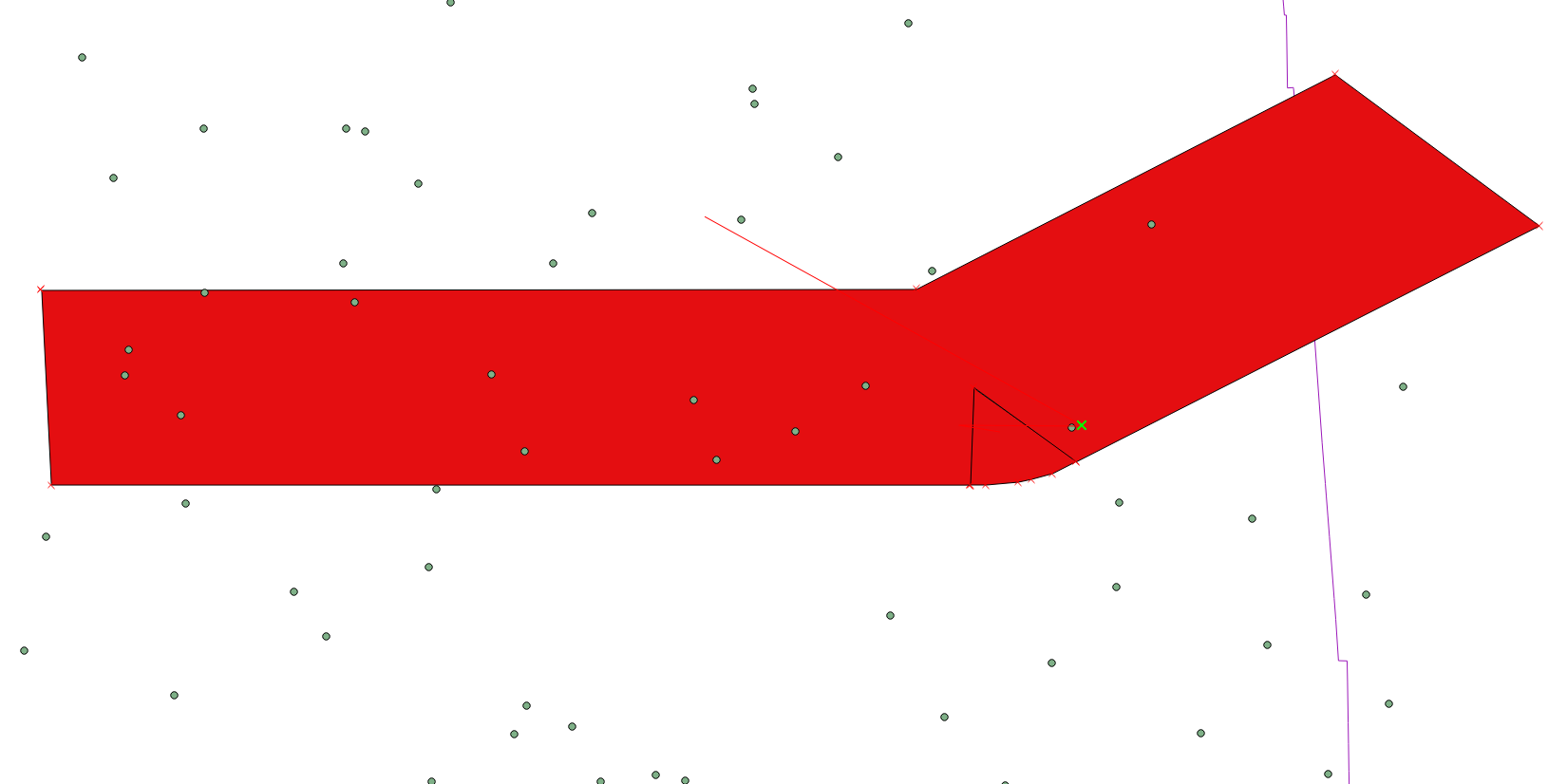 So I have everything working just fine and dandy, but I have no idea how to properly join these rectangles so that they have a nicely fitted curve to fill in that triangular gap.

Any help would be greatly appreciated.

Since I am assembling the polygon data myself I can easily identify the points that need to be connected. Is there a way to join two points with a curve?

I am not sure if this is the most elegant approach, but it worked for me and maybe it will help somebody get started in the right direction. If you have 1.5+ of PostgreSQL then use ST_Buffer with different endcaps - I am sure it performs this in a much more efficient manner).

Because I have the two rectangles and all their coordinates, the biggest problem was insuring that I am joining the exposed open parts and not touching the other side (which side is the kink on?) 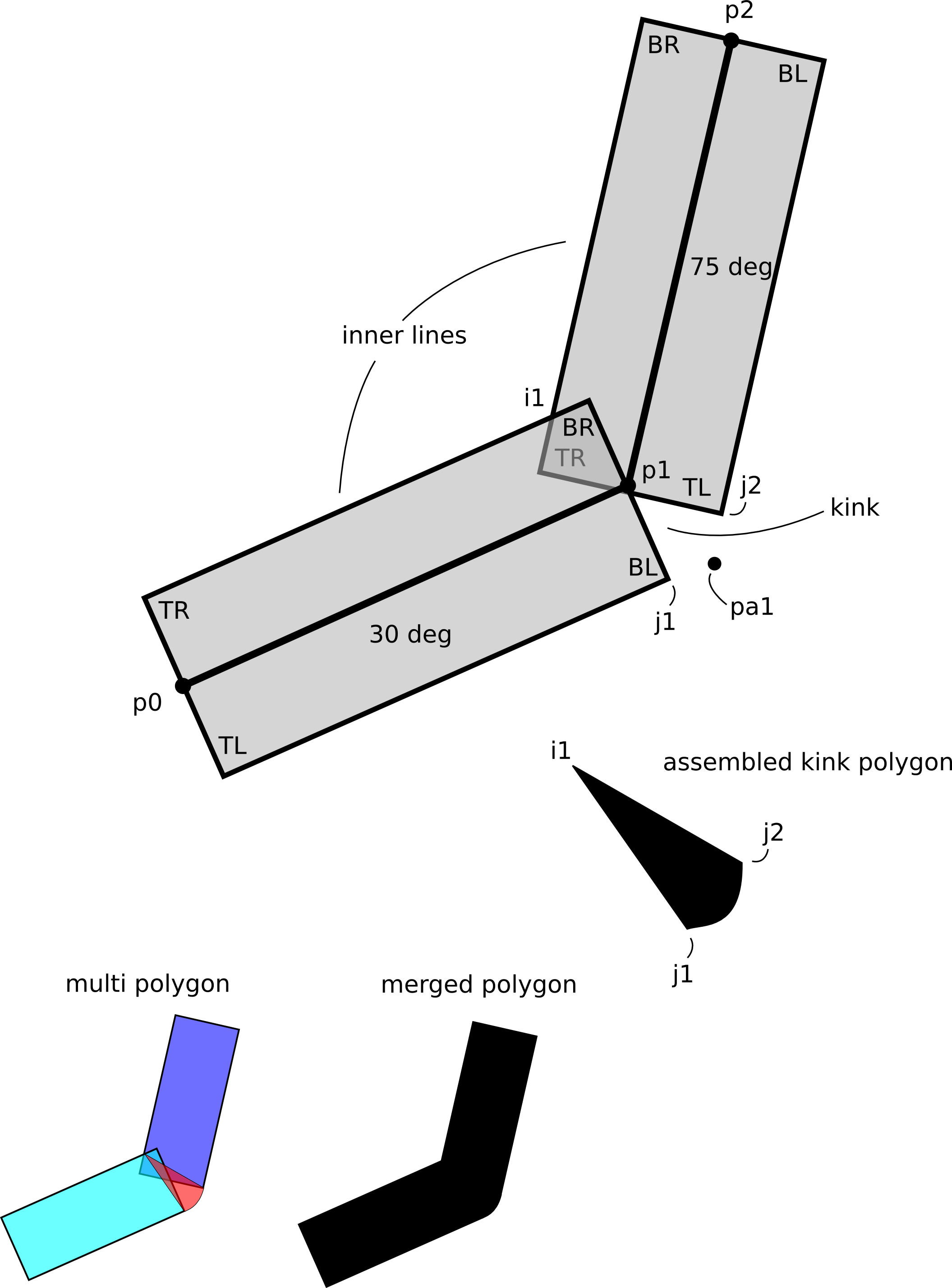 How do I know which points to join?

I've built a "Rectangle" class that has the points TL, TR, BL, BR. They are always oriented along the line.

How do I know whether to join BL to TL or BR to TR?

Based on the difference in angle between the two rectangles I can determine what side has the kink.

In my Rectangle class I am also keeping track of the angle and normalizing it to 0->360 degrees. I don't think this was the best approach but it made it easier for me to understand the problem in my head. I had to do some basic math when the difference in angle was greater then 180 degrees as it causes the kink to flip to the other side.

How do I build the curve?

Once I have identified which points I wish to join (j1 from rectangle 1, j2 from rectangle 2), I need to find a third point somewhere out in the middle (see example above (pa1)). This is used for quadratic bezier curves which I use to build the arc between the points. This third point is used to "pull" the curve away from the rectangles.

The python function I used to build the curves is:

To find this, I find the intersection between the inner lines (lines on the side of a rectangle that doesnt have a kink) (i1). Then I create a vector from this towards the original point (p1) that both rectangles share (the original point before buffering). I then increase the length of this to find my point to pull the curve (pa1).

I then build the curve using the above algorithm between j1, and j2 using pa1 pull out the curve.

I then take all the kink polygons, and the rectangle polygons I have and perform a cascaded union (using GEOS from GeoDjango - although you could use Shaply) to collapse these polygons into a single polygon.

Note: To reasons I do not quite fully understand when taking a MultiPolygon of all this data and performing a cascaded union I am not always given a Polygon. Sometimes I am given a GeometryCollection of a useless LineString (no idea where this is coming from) and the combined Polygon. I am guessing this is some side-effect to collapsing certain geometries and stuff not fitting correctly - maybe rounding errors - not sure. If anybody knows why please let me know.

Not the answer you're looking for? Browse other questions tagged python coordinates or ask your own question.

9
How to create an oriented buffer using arcpy?