Ok so I've got a noodle scratcher and want some input before I open my mouth to my higher-ups. I recieved a new boundary description from a surveyor that uses metes and bounds in the form of bearings N XX°XX'XX" W going XX feet and so on. The coordinate system they used was a custom Traverse Mercator projection. However, my state, North Dakota, uses State Plane S Nad83 Int. Feet (a Lambart Conformal Conic projection) as its standard coordinate system; so I believe that all their records would be stored in that system.

My question is what, if any, difference will there be in the bearings if it were transformed into the State Plane system? Both systems use the same units, datum, and spheroid. 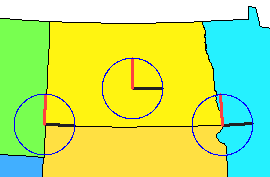 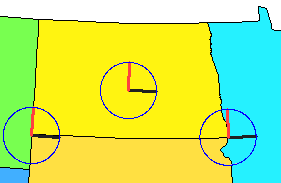 Tissot indicatrices for UTM Zone 14 North: the red lines point towards true North. They tend to point about 1.1 degrees further towards the East (clockwise) than their correspondents in the ND SP S 83 map.

I cannot tell you whether this difference is "minuscule" or not, because that depends on your needs, but given that a 1.1 degree error translates to about 2% of the distance when locations are given as bearings and distances, this seems like an enormous discrepancy for surveying purposes.

Not the answer you're looking for? Browse other questions tagged coordinate-system land-survey state-plane bearing cogo or ask your own question.