I have what should be a simple task to perform: join ~47K census blocks from the PL redistricting files with pop and racial data joined to Chicago Public Schools High School boundaries to get an aggregate total of >18 population.

I converted the blocks from polygon to point using centroids to avoid blocks from intersecting two boundary attributes in the target feature and thus being counted twice. However, when I run the spatial join tool with Completely Contains, One_to_One aggregate, I still get an overcount of approximately 10k blocks and 700K people. I know there is a simple problem underlying this, so I'm hoping someone can spot the obvious and help me out here.

I've attached a dropbox link here:Direct Dropbox URL of Files to the two files that need to be joined for further clarification.

All Districts Merge refers to the target for the join, ...Centroids, the blocks to be joined to the Districts.

As an added bonus, if anyone knows of any FOSS redistricting tools--my end goal is to create 12-13 amalgamated districts composed of these boundaries. 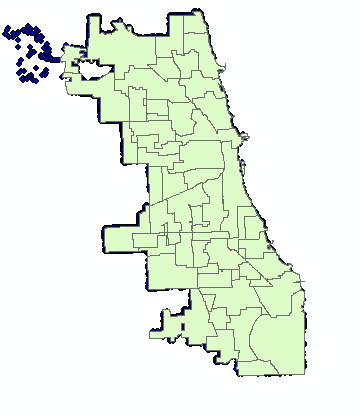 Edit: I'm looking to summarize the pop total. That attribute is joined to the point file. It's a tabulation of pop over 18.

Before spatial join it amounts to approx 2,100,000, which is correct for Chicago city. There should be~47 k blocks too. When joined to the districts file however I get a sum of all districts of 2,800,000 and a join count for all districts of 57k.

This leads me to think that when joining blocks to districts I'm getting a double count of blocks that might slightly overlap two districts.

Even after setting join to completely contains parameters I had the same overcount.

Can you do a join where each feature is counted once and assigned to only one district?

You have some topological issues with the polygon dataset - seems there are a lot of overlapping areas.

Importing the layer into GRASS (which checks and tries to fix these kinds of errors) gives:

You'll note that the overlapping area as a percentage of the total area is about the same percentage as the 'extra' population you're finding in your spatial join.

To check that it's an overlap issue, you can do the other side of the spatial join, joining the first-found district to the centroid points and then summarising them by label - the total comes to 2073865 as expected.

If you look at the attribute table, you'll also see that you have some duplicated rows such as "Morgan Park HS" and "Corliss HS". Most likely you can simply delete those duplicates and be OK - however, make sure you check in GRASS again after cleaning.

Not the answer you're looking for? Browse other questions tagged qgis arcgis-desktop census spatial-join redistricting or ask your own question.