I am trying to create a single continuous (neighborhood) polygon from many tax block parcels. The Multipart to Singlepart GP tool does not accomplish the task since I need the polygon to be complete; i.e., without the spatial gaps between the parcels (see image). Any ideas of a quick and dirty way to accomplish this? 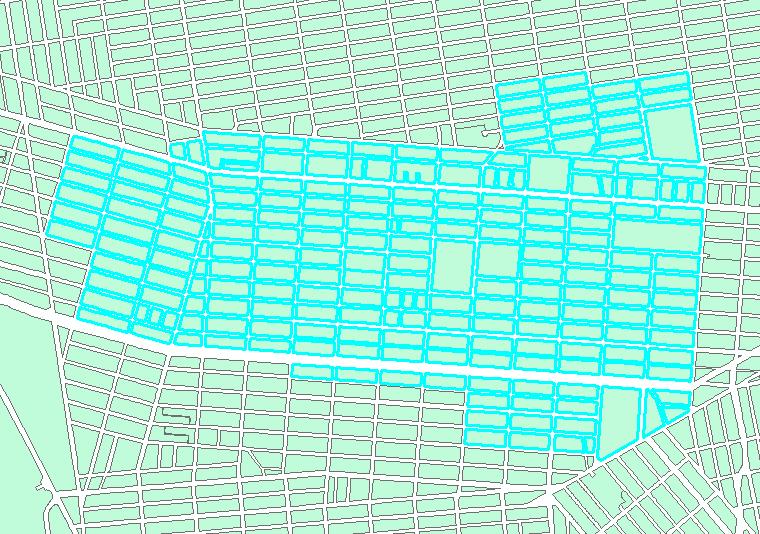 You could use the Aggregate Polygon GP Tool. You'll need an Advanced license though.

Select the polygons to include, buffer them all by at least half the largest gap among them (but only by a very little bit more), union the buffers, and negatively buffer the result by the same buffer radius.

The only errors made will be that concave indentations around the perimeter will be slightly smoothed (faired with circular arcs). One way to clean them up (if needed) is to repeat the procedure on all the other polygons. Subtract its result from the original result. This creates a solution that errs in the other direction: the convex outside corners will be smoothed. Fix them by unioning this result with all the original polygons: that will sharpen all those corners without adding any unnecessary junk.

Union the polygons to include and compute a "concave hull" for them.

Not the answer you're looking for? Browse other questions tagged arcgis-10.1 geoprocessing or ask your own question.

126
What are Definition, Algorithms and Practical Solutions for Concave Hull?
54
Removing small spaces (slivers) between polygons?
2
Polygons will not buffer in ArcMap and instead give WARNING 000117: Warning empty output generated?
3
Converting adjacent singlepart polygons to multipart?
3
ArcMap Model Builder Iterator to create selections