I'm trying to do the following: I have 2 shapefiles, one containing all the public schools in NY, another one containing the hotspots in NY (both in points form).
Now what I'm trying to do is calculate the distance from the schools to their closest hotspot. So that, when I merge it to my "SchoolPoints" layer and import it in TileMill I can visualise for each school the distance from the closest hotspot (for example: coloring the schools close to hotspots green, the ones that are far from a hotspot red).

To do this I used the distance matrix tool, with following settings: 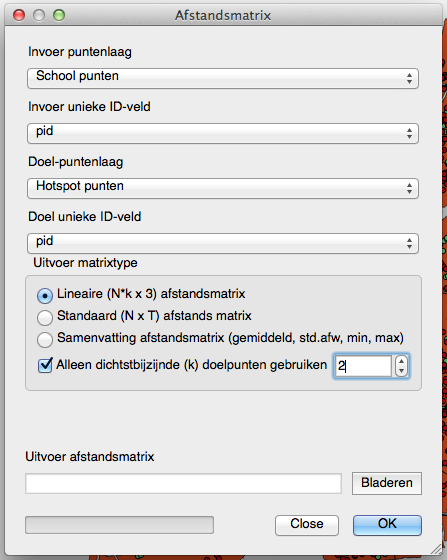 After that I linked the data to the "SchoolPoints" layer (with as mutual field InputID and pid).

That results in a column, with a distance to the closest hotspot for each school, as it should be.

Well, not exactly. The problem I'm facing is: when importing my "SchoolPoints" layer in TileMill and after writing a small piece of code to plot the color differently according to the distance. For example:

It shows wrong results. Points close to a hotspot that should be green show up red, and points far from hotspots show up green. Some points appear to show a correct color, so the problem is not in my CSS code.

A friend suggested that it might be related to the projection system I'm using. I already used two, both of them giving wrong results:

Now my question is:

What projection system should I use for NY? And also: might that solve my wrong distance values issue?

Here's a link with the shapefiles I used if you'd like to check it out yourself.

My first thought, regarding reversed red and green labeling, was that you simply have an ordering problem -- something requiring a minor code fix. That may still be the case.

Because of the units, you must be sure that your shapefiles stand in the same Coordinate Reference System. So, you choose one CRS (the one for New York) and, if necessary, convert your two shapefiles in this CRS.

Not the answer you're looking for? Browse other questions tagged qgis shapefile coordinate-system distance or ask your own question.

1
How do I generate a distance table using 2 different point files and a line file?
1
Associate output of QGIS GRASS distance/network functions with 'from' points rather than 'to' lines
4
QGIS 3.4 distance matrix returns the wrong point
3
Calculating distance between multiple lines of points in QGIS?
3
How to add a time component in a heatmap?
1
Calculate the distance between points and the start of each lines