How do I generate a random raster (or probabilistic cellular automaton) in QGIS?

I'm trying to create something like a cellular automaton land cover change model using QGIS, in which cells randomly change land cover based on probabilities determined from various input rasters. I've already have a map of probabilities of conversion, and I need to take the next step.

I found this question, Randomly altering raster map of habitat types?, which looks very similar to what I want to do. The suggested approach is to use a Markov chain or probabilistic cellular automaton, and the commenter writes: "The transitions can be implemented using Map Algebra statements, which makes this method practicable in any raster-based GIS, even those without direct or quick access to cell-level data."

Can anybody tell me how to do probabilistic map algebra in QGIS or one of its extensions? I don't see any probability tools in the Raster Calculator.

Failing that, is there a tool that will simply generate random rasters to be later combined using the Raster Calculator?

I don't know of any cellular automaton tools integrated in QGIS yet, but if you just wanna generate a distributional based random raster based on a number of inputs (similar to this ArcGis function) then you could use the "Create random landscape" tool i implemented in the QGIS Plugin LecoS.

Example output (of a random raster with Gaussian distribution): 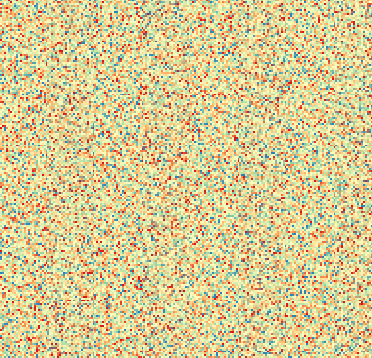 Many more distributions are available. The plugin can be started from within the Processing toolbox. Read more here.

I will try to look more into generating a cellular automaton landscape as soon as i have free time available.

EDIT Have you seen this answer? You could probably adapt the R-code for your needs and make it even loadable in QGIS-processing.
Share
Improve this answer
edited Apr 13 '17 at 12:33

One solution that works:

With the release of QGIS 3.14 you will be able to use the native Create random raster algorithms in the processing toolbox for generating random rasters. There are different random value distributions you can choose from besides the standard uniform random distribution:

Not the answer you're looking for? Browse other questions tagged qgis raster-calculator cellular-automata or ask your own question.

12
Creating randomly shaped clumps of cells in a raster from seeds of 1 cell/pixel?
12
Randomly altering raster map of habitat types?

12
Creating randomly shaped clumps of cells in a raster from seeds of 1 cell/pixel?
4
Markov chains, cellular automata, and raster algebra
4
How to generate random points that lie on a line in QGIS?
3
How to define output format of raster calculator in QGIS?
2
Adding two rasters using map algebra in ArcPy?
0
Based on what rule does Raster Calculator produce output when the input rasters are misaligned?
1
How to Export Map Accurately as a Raster Image in QGS 3.4