How to locate a house on the 3D Map correctly?

I've done my 3D map generation in WebGL/THREE.JS project and have an issue with the building locations.

I have the data about building position ( its polygon ) from DB server, but first of all I want just to locate not the polygon data, but a simple cube. The aim is clear is as a crystal: to set a building to the correct position by putting a cube on the 3D map. 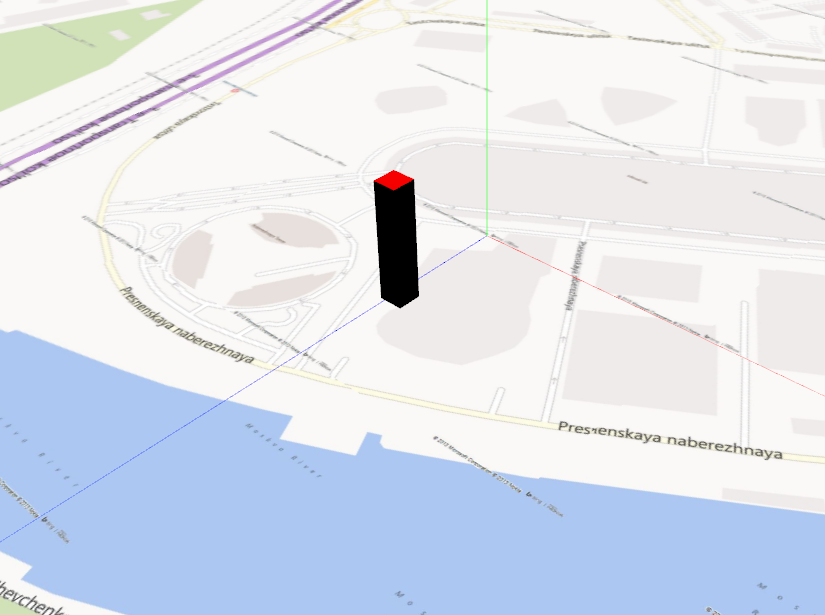 I have demonstrated it, because I want to admit, that to create a building and place it on the map - isn't a problem. The problem is to set building into the correct position/location on the map.

What I have done before?

Because the building record has two fields in DB:

I thought that I must convert the geospatial coordinates of each building: latitude, longitude to its cartesian values, because WebGL/THREE.JS don't work with the shperical/geographic coordinates system.

So I have built also a JSON web-service which helps in data transformations and similar aims.

Now... I'm really confused how to use it for locating the building correctly on the map. If you would like see, I'm prinring the position of each building in console:

Spherical coordinates and converting at web-service side by such formula in my C# code:

So... Right now I'm thinking about some proportions to use... But this way can be incorrect... So what's your suggestion how to set a cube into the correct position on the 3D map just for showing the real position of some buildings.

PS: The records lat | long of each building in DB is 100% correct. Thanks!

2
Why do edits made in attribute table not show in associated layer? QGIS 1.8.0
1
Can I edit coordinates within an edit session and reproject without reloading the data
2
Tiled raster image to be placed in an OSM/ Leaflet.js map
3
PostGIS strange difference in distance calc from different point defenitions
4
Averaging Cartesian ECEF coordinates then converting to WGS84 without latitude drift
0
Why does Lat/Long differ depending on the coordinate system of the data?
0
QGIS showing decimal degree coordinates in map/layout composer display
1
Convert raster to CSV with lat, lon, and value columns