The GIS of War - Tracking Conflicts and Their Effects

Ask Question
Asked 11 years, 1 month ago
Modified 6 years, 3 months ago
Viewed 8k times
55
This question's answers are a community effort. Edit existing answers to improve this post. It is not currently accepting new answers or interactions.

I was idly speculating on the many sorts of things people are keeping track of these days with GIS - natural/human catastrophes, demographic and economic patterns, climate change, etc. In that vein, I started to look around for GIS' applications in war and international conflicts. There are many obvious uses for it in the military, but is there any database or publicly accessible application that organizes war-related information in a spatial and/or cartographic context? Time would undoubtedly play an integral role in any robust methodology. The most I was able to find was an in-progress database for tracking war crimes. What else is out there for public consumption, if anything? 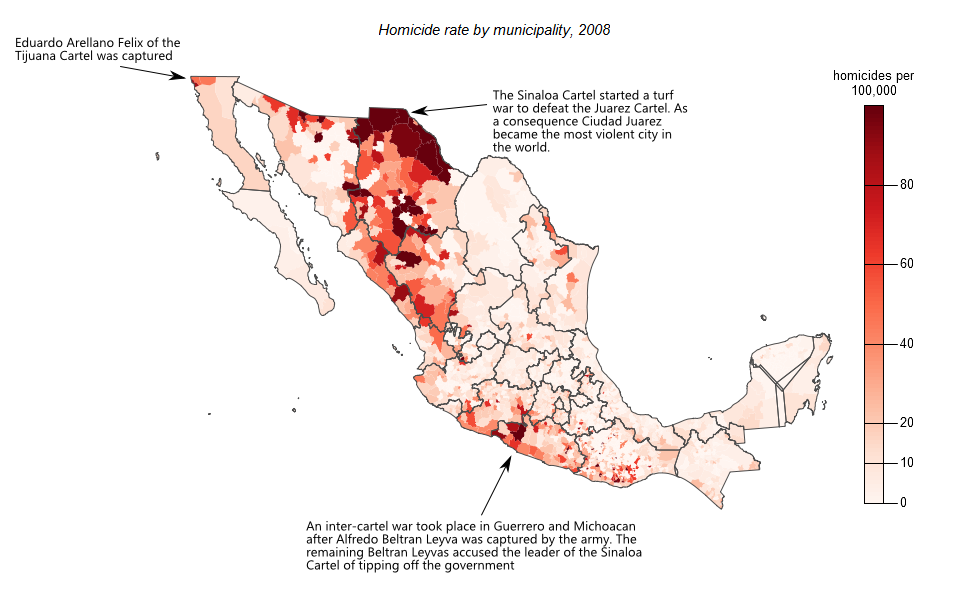 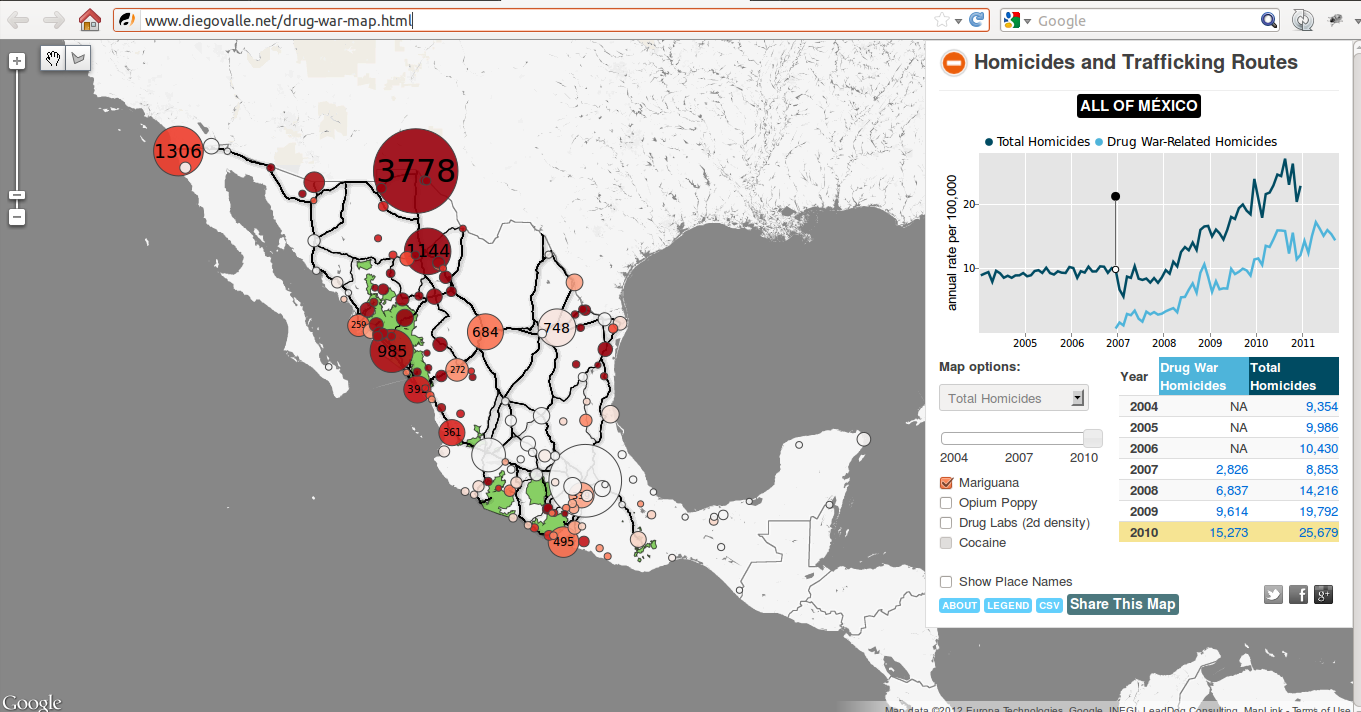 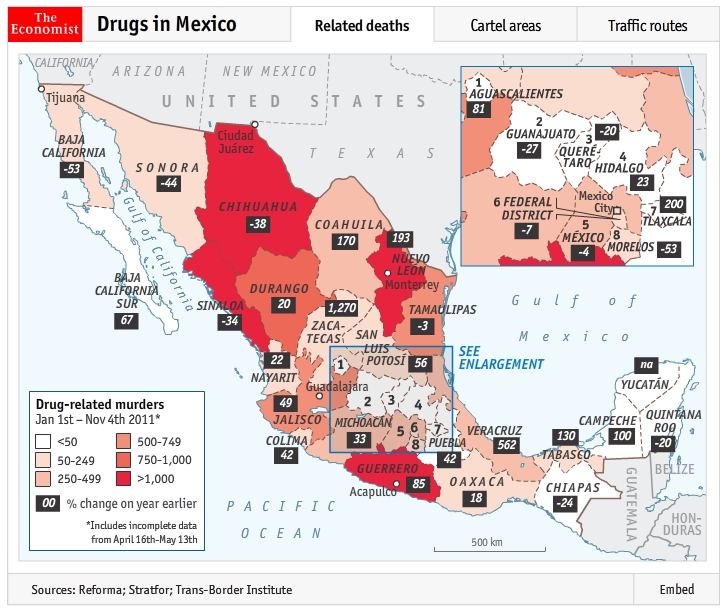 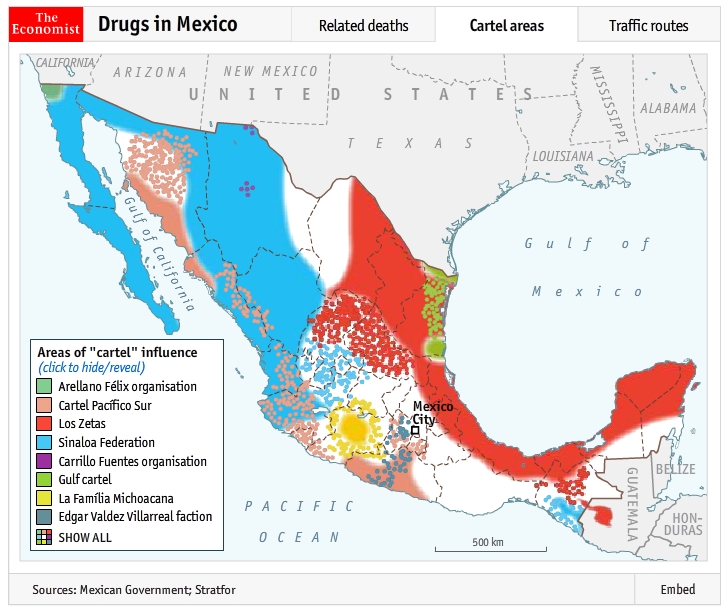 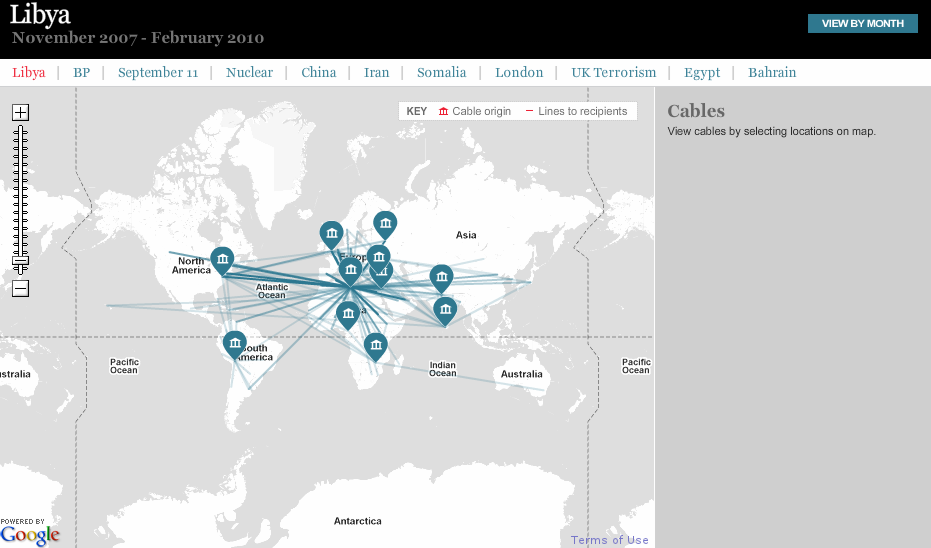 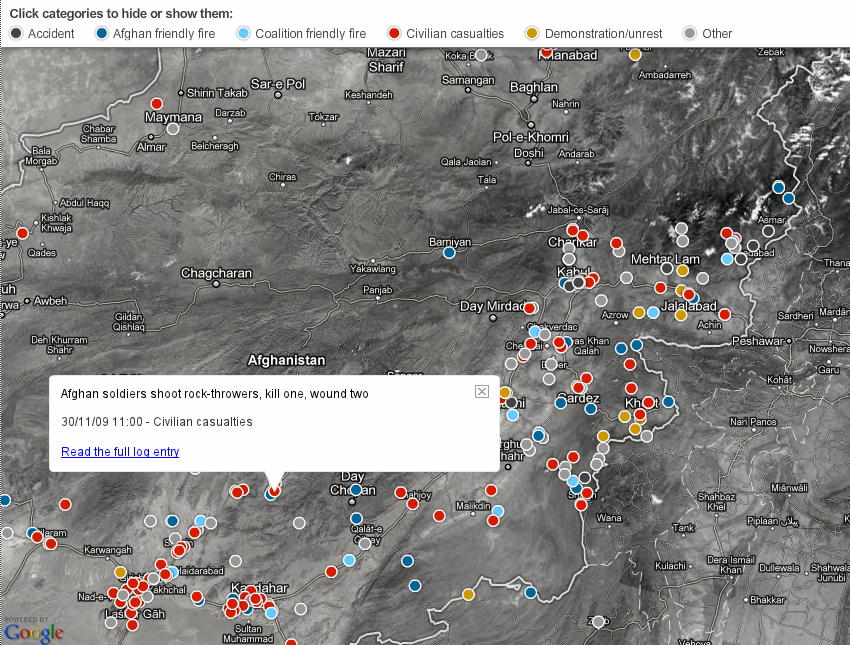 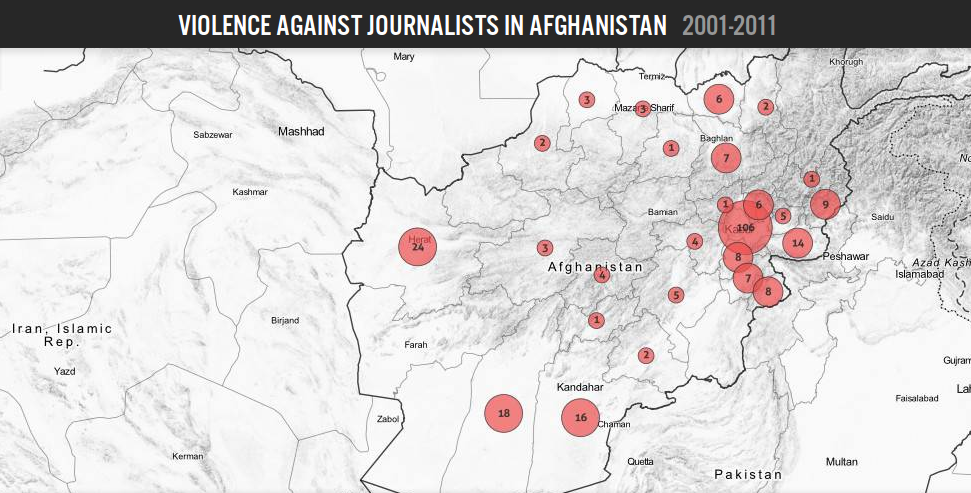 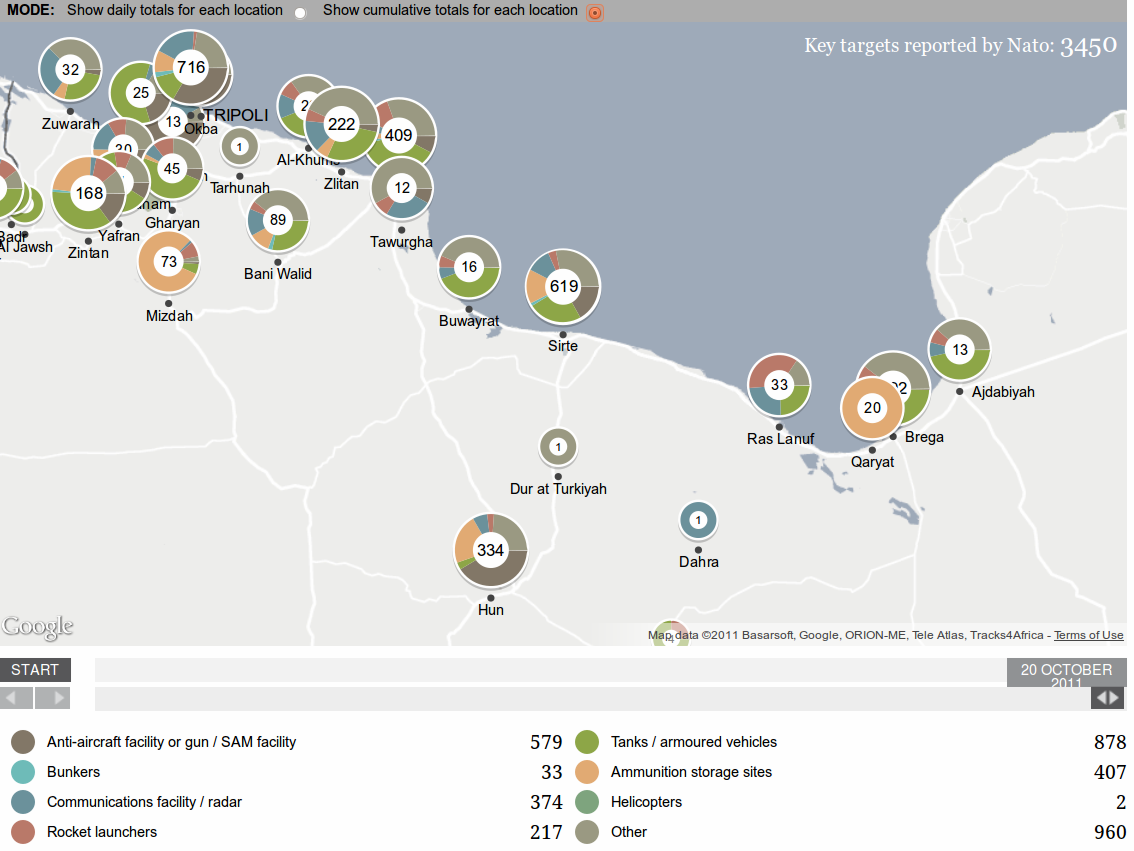 Update 2: Although not a military conflict per se, London riots start to fit description of this question as well. Slashgeo points to few geovisualizations on the topic. Guardian maps location of suspects, riots against poverty. And GENeSIS analyzes geolocated tweets. 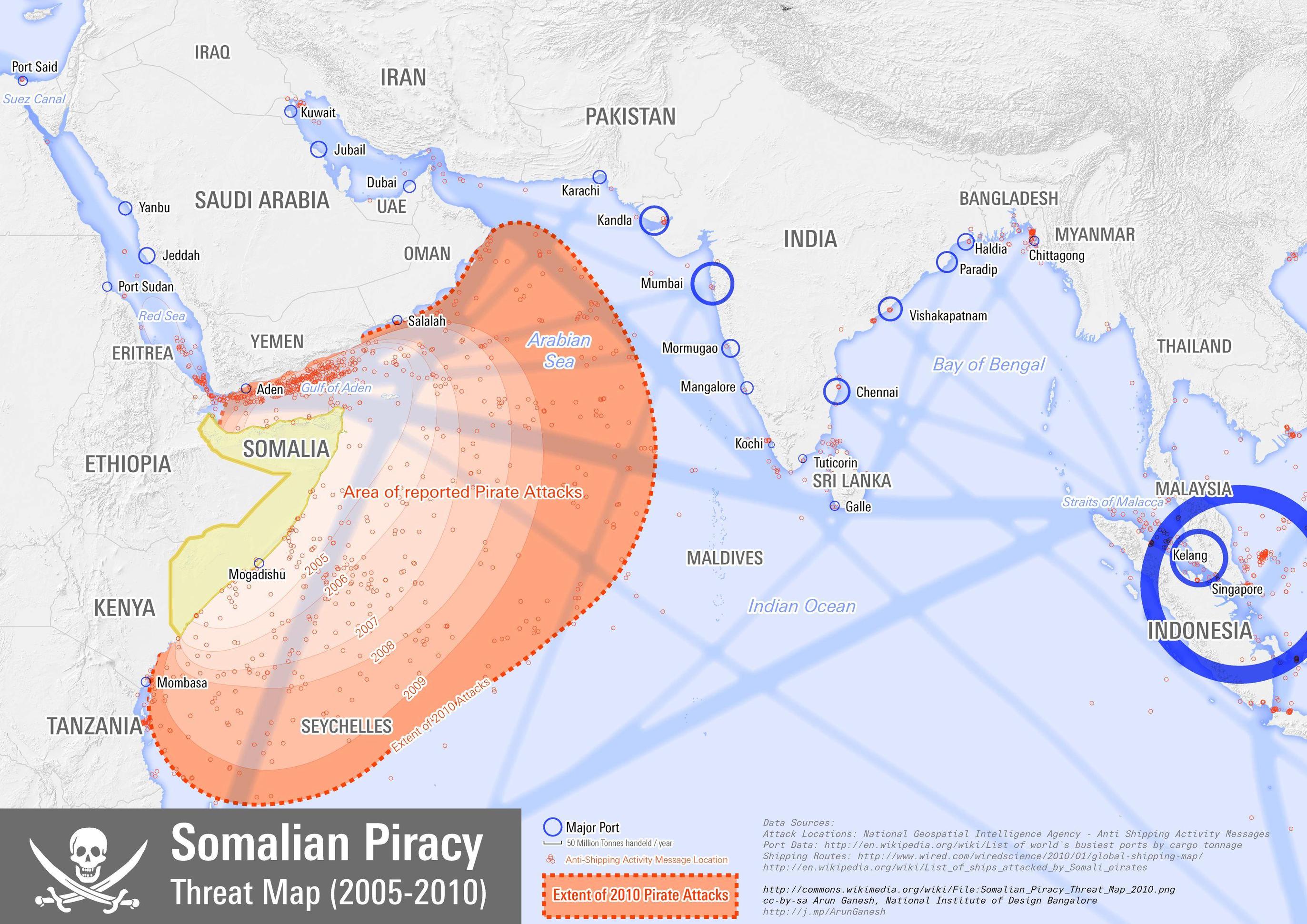 For better or worse, I'm surprised WikiLeaks' CableViewer doesn't include a map UI. They do organize the data by country.

After searching, I see the Guardian has created a map of Wikileaks Iraq war logs, a different leak that came out before the cable leak.

Not exactly what you are asking for but here is some information on public domain data related to terrorist attacks.

There are two databases that currently store data on terrorist attacks. One is the START data via the University of Maryland. The other is a data collection, Worldwide Incidents Tracking System, collected by the National Counterterrorism Center. I have not seen either extensively used in any mapping application, although they have geographic identifiers that would allow them to be.

While I see radek updated some of his awesome examples, I will give some updates too!

I read this excellent paper

And I see that they have a webpage of the data used as well as copies of that and several other manuscripts. The same individuals have another webpage of data and manuscripts looking at Violence in Afghanistan and Pakistan using the wikileaks data and another data set I don't think has been mentioned here, Armed Conflict Location and Event Data (ACLED)

The Journal of Quantitative Criminology has a forthcoming thematic issue on the Quantitative Approaches to the study of Terrorism (currently the issue is all within the online first section). Two of those articles incorporates spatial analysis into the articles

This article likely uses the START data I referred to earlier. Unfortunately I can not find a publicly available copy of the paper, but it may be available on the START publications page in the future. The data is public though regardless.

There is another article in that issue that conducts spatial analysis (Braithwaite & Johnson, 2011), but they don't appear to be using a public data source. There is an earlier publication that is similar (Townsley et al., 2008 PDF). It also reminds me another project I was aware of, SCARE (via an All Points Blog Post) which uses similar IED data (just for reference). If anyone knows where/how to get similar SIGACTS data let me know in a comment.

The NYT has a map that tracks day-by-day changes in the Libyan revolt. (Via the MapRoom).

Since posting my original response, "story maps" have become commonplace. Esri has Story maps. And so does Knight Lab, which uses MapBox.

I can't seem to get it to work now but I used to peruse a very informative and easily navigable interactive map of civil war battles.
It used a map and allowed you to select battles.
Which would then animate with timing (advancements) and decisions (written in scrolling popup) and allowed the user to step through the battles.

This is not what you call current but certainly displays "war-related information in a spatial and/or cartographic context?". 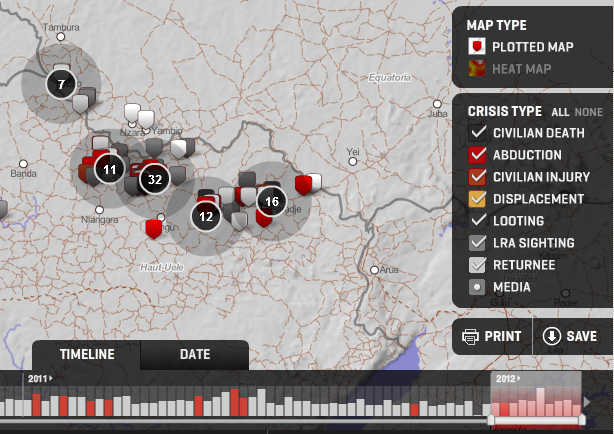 The LRA Crisis Tracker tracks the activities of the Lords Resistance Army, which will hopefully bring its leader, Joseph Kony, to justice. 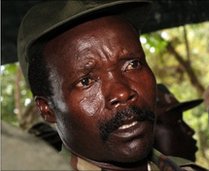 There's an article here which gives a write up of an interesting Ushahidi deployment to monitor the conflict in Iraq on behalf of Mercy Corps.

I'm not sure if it's been deployed yet and whether they will include public content.

There are also plenty of data sets available online which are already geotagged but not necessarily available to view on a spatial platform. If you have such data, there are easy ways to map it using some great free tools to provide filtering, temporal analysis, custom views, etc.

We have access to data in Iraq which we have visualized. Unfortunately, it is proprietary to a third party but we may be able to open it up for analytical purposes. An example heatmap of violence in Iraq in 2011 is available at this link: Iraq Heatmap 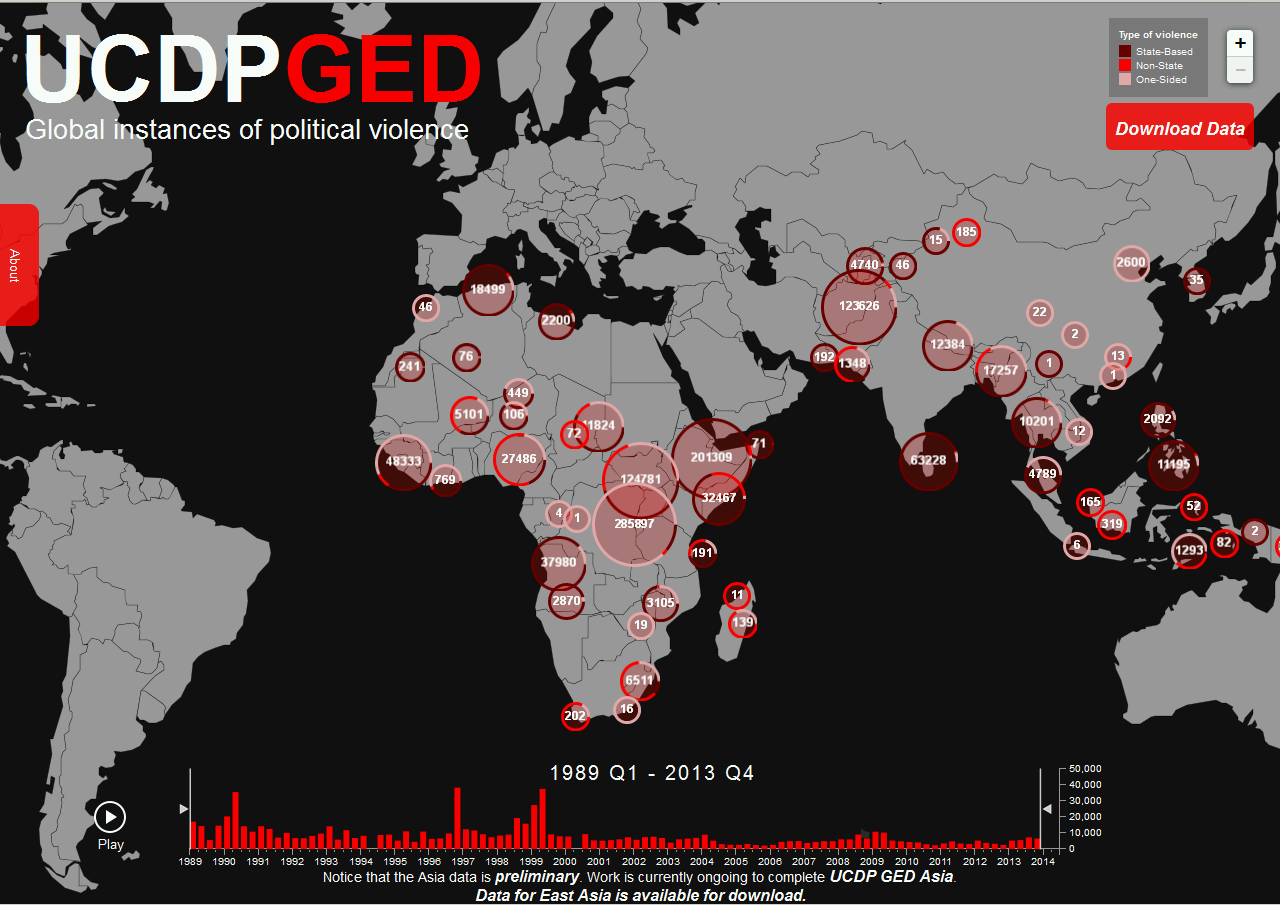 You can also check out the Social Conflict Analysis Dataset (SCAD) which collects georeferenced information on riots, strikes, and other protest events.

There also several ongoing projects that attempt to collect georeferenced event data on conflict automatically from news sources. This blog post is a good start for further reading in that direction.

More academic references about GIS data and conflict studies can be found here, here, and here.

Japanese artist Isao Hashimoto has created a beautiful, undeniably scary time-lapse map of the 2053 nuclear explosions which have taken place between 1945 and 1998, beginning with the Manhattan Project's "Trinity" test near Los Alamos and concluding with Pakistan's nuclear tests in May of 1998. This leaves out North Korea's two alleged nuclear tests in this past decade (the legitimacy of both of which is not 100% clear).

Each nation gets a blip and a flashing dot on the map whenever they detonate a nuclear weapon, with a running tally kept on the top and bottom bars of the screen. Hashimoto, who began the project in 2003, says that he created it with the goal of showing"the fear and folly of nuclear weapons." It starts really slow — if you want to see real action, skip ahead to 1962 or so — but the buildup becomes overwhelming. 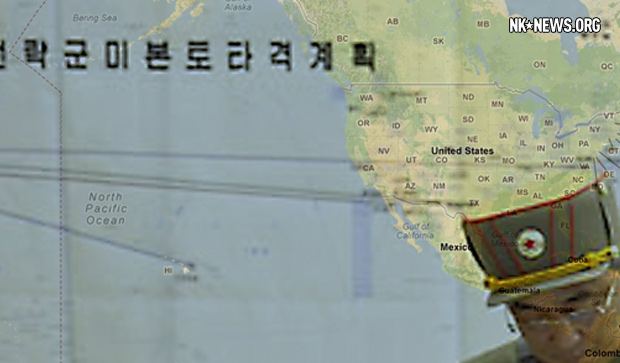 Looks like they printed Google Maps. I've never been able to figure out how to print out Google Maps. Maybe Eric Schmidt showed them how during his visit? 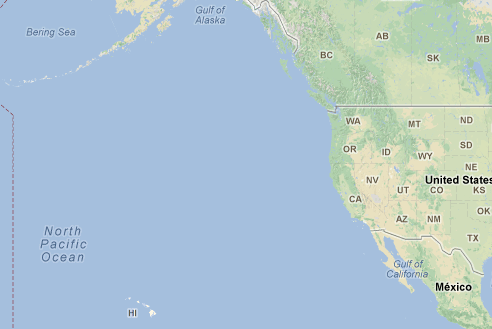 The Guardian has this map with an azimuthal equidistant projection, which is perhaps more suitable for missile warfare. 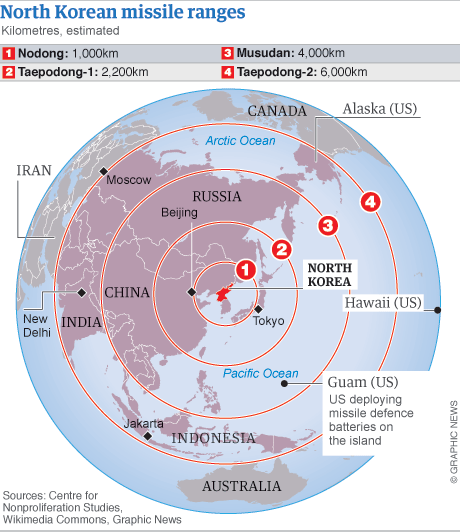 There's a review here about a recently published study: "War, space, and the evolution of Old World complex societies".

Intense warfare is the evolutionary driver of large complex societies, according to a new mathematical model whose findings accurately match those of the historical record in the ancient world.

One of remains of war that really needs mapping are the locations of minefields, as this has practical application in daily life, and it is not just used for historical curiosity.

NOTE: Due to fact that this project is no longer maintained and server is stuck with very old SSL version Chrome and FF block access to site. IE still works.

4
How GIS and SDI (spatial data infrastructure) are related?
3
How do government agencies come up with their data dissemination policies (and fees)?
5
Sourcing GIS data from First World War (WW1)?
5
Get a list of all countries and their states?
0
Where in the UK may I find a register or map of properties and their energy use
1
Where can I get GIS data layers that show sea ice data for the Beaufort and Chukchi Seas?
1
Texas and New York Township, Range, and Section GIS Data
12
Turning off all pulsing-heartbeat and other animated effects in ArcGIS Pro?