How to find ring of coverage of GPS Satellite on WGS-84 ellipsoid? 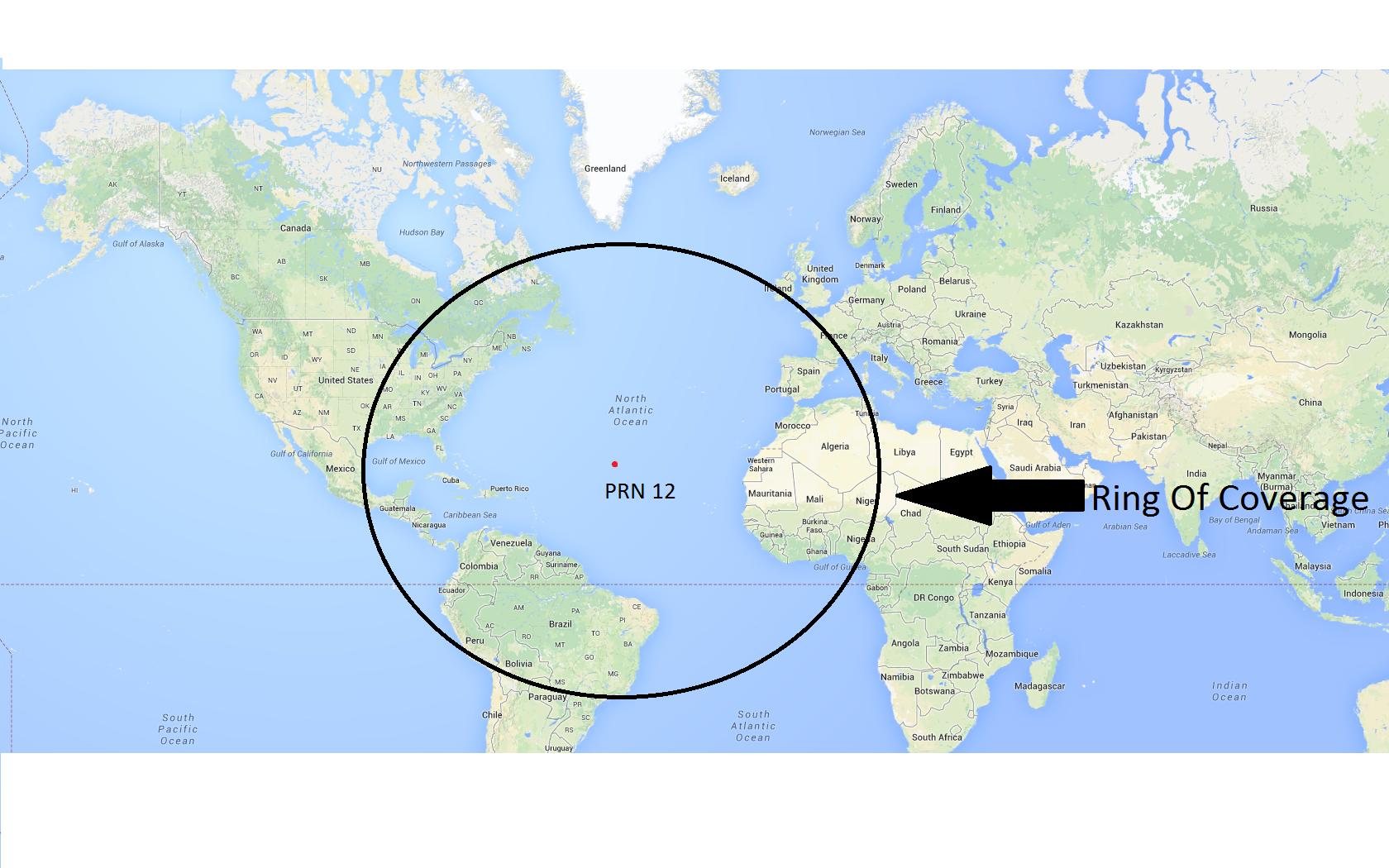 What I have tried so far:

We have a ECEF WGS-84 position by geodetic latitude phi and longitude lambda:

I then convert ECEF to east-north up (ENU) geographic frame with phi and lambda using the matrix:

The solution for an ellipsoid is pretty messy--it is an irregular shape, not a circle--and is best computed numerically rather than with a formula.

On a world map the difference between the WGS84 solution and a purely spherical solution will only barely be noticeable (it's about one pixel on a screen). The same difference would be created by changing the mask angle by about 0.2 degrees or in using a polygonal approximation. If these errors are acceptably small, then you can exploit the symmetry of the sphere to obtain a simple formula. 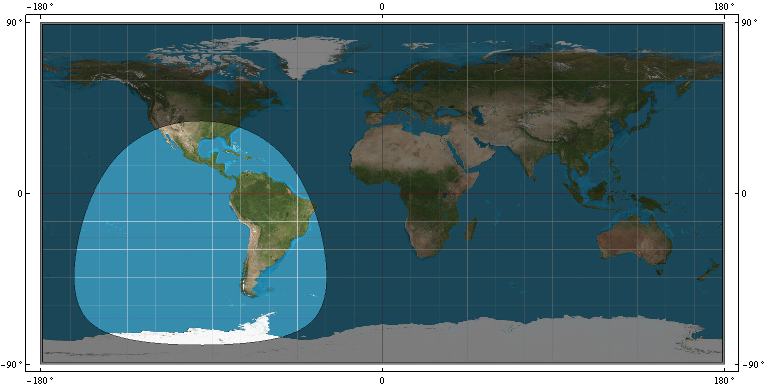 This map (using an Equirectangular projection) shows the coverage for a satellite at 22,164 kilometers (from the earth's center) with a mask angle of m = 15 degrees on the WGS84 spheroid. Recomputing the coverage for a sphere does not visibly change this map.

On the sphere, the coverage will truly be a circle centered at the satellite's location, so we only need to figure out its radius, which is an angle. Call this t. In cross-section there is a triangle OSP formed by the earth's center (O), the satellite (S), and any point (P) on the circle:

The solution is now a matter of elementary trigonometry. The (planar) law of sines asserts that

As a check, consider some extreme cases:

This reduces the problem to drawing a circle on the sphere, which can be solved in many ways. For instance, you can buffer the satellite's location by t * R * pi/180 using an equidistant projection centered at the satellite. Techniques for working with circles on the sphere directly are illustrated at https://gis.stackexchange.com/a/53323/664.

FWIW, for GPS satellites and small mask angles (less than 20 degrees or so), this non-trigonometric approximation is accurate (to a few tenths of a degree and less than a few hundredths of a degree when the mask angle is under 10 degrees):

Not the answer you're looking for? Browse other questions tagged gps wgs84 or ask your own question.

7
How to improve positioning of images taken with GPS and Gyro info?
19
How do GPS/Glonass/Galileo satellite know their position?
2
Find latitude of point on great circle given longitude
2
Post-processing GPS Satellite Measurements
2
confused about distances on the wgs-84 ellipsoid
3
How big is the error of relative elevation between two points taken from GPS relative to taken from a topographic survey?
2
How can I find the average bearing using a set of zig-zaggy coordinates, knowing the user travelled in a straight line during that period?
2
Treating latitude/longitude as a pair of polar coordinates