It is about my implementation from an answer of this question. It is more an postgresql issue than a GIS issue, whereas it is about geometries and spatial queries.

I want to create a view from the query below, whereby I can select the result by an ID (that defines a linestring). My problem is, that I had no success with coding the query in that way, that for every linestring only one newpoint is created that is half the length away from the linestring (see last subquery 'newdistance'). I tried to SELECT DISTINCT ON (id)... but that failed.

I have the same problem in another query, to "extract" a WHERE clause (here in the first part of the query) from an subquery.

Setting the WHERE clause id=1 at the end of the query didn't succeed.

in the last part of the query it works ONLY with 2 objects (linestrings). With more than 2 linestrings it doesn't work.

Here is a picture, how does it has to look like. 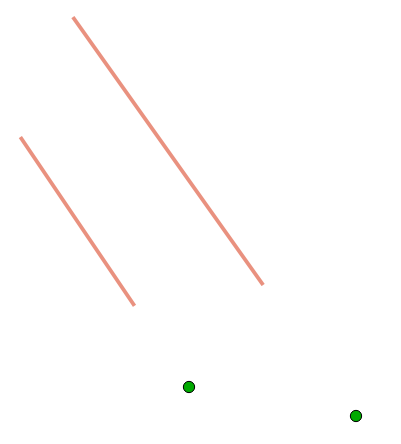 should work fine, for all values of id

Not the answer you're looking for? Browse other questions tagged postgis postgresql point query linestring or ask your own question.

19
Extrapolating a line in PostGIS

1
Enhance performance of a join query for mapnik using postgis
8
How to create linestrings with a definite angle and length, that are fixed to a point
1
Create multi-line from point in PostGIS
1
Rewriting query to match two points with linestring in different database table?
5
How to speed up a query for nearest linestring to point data
1
Closed Linestring
2
SpatiaLite - WITH, view or sub-query?
2
Can we take the length of a linestring by calculating ST_Distance from its ST_StartPoint and ST_EndPoint?
6
LineString VS Multi-LineString Performance PostGIS
1
Why does a LINESTRING change in length after union with a shorter but completely-overlapping LINESTRING?