Does the strength of GPS weaken in rural areas?

Does the strength of GPS weaken in rural areas? For example, based on how the satellites work, would the strength in the centre of Australia differ from a populated city in Europe?

For GPS, the simple answer is no. The strength of the signal from a GPS satellite is determined more by atmospheric interference and tree/foliage (or other) cover.

In fact, in large cities with tall buildings it can be more difficult to get high accuracy readings than it would be in an open farm field in the middle of nowhere. Tall buildings can block, or worse reflect the GPS signals. Tree canopies will be an issue pretty much anywhere that you want to collect that has trees, regardless of population density.

(1) There is actually one factor that might be influencing some GPS receivers. To properly interpret the GPS signal, a GPS receiver must have certain data on position of the satellites, called the Almanac. These data can be downloaded from the satellites themselves, but that takes quite a bit of time (IIRC 12.5 minutes). As long as the GPS receiver does not have the full data, it might not be able to function properly and making you wait for the initial position.

If a GPS receiver also has mobile connectivity (so-called AGPS), it might be able to download the same data over the GPRS connection, which is much faster. And data connections are more common in cities.

So, while technically the strength of the signal is not any weaker in rural areas, usability of (especially older) GPS receivers might be worse.

(2) Professional GPS receivers can also use systems called DGPS, which use local up-to-second data on weather conditions to improve location measurement for the GPS system. This is technically not a part of GPS signal itself, instead a separate system that helps in making measurements more precise.

The DGPS signal may be broadcasted from a ground-based radio station, and these tend to be around populated areas. It might also be streamed over the Internet, which means that a data-enabled GPS receiver could provide better location measurements while in range of mobile data (assuming the receiver is actually capable of DGPS) — and again, mobile data has better availability in more populated areas.

So here again, while technically the strength of the GPS signal is not any weaker in rural areas, additional data potentially sent by local radio stations or streamed over data connections (whose availability is better in cities) might improve measurements.

Esp. the last point can result in bad accuracy in populated areas with skyscrapers and high buildings. So the receiver might see 3 satelites, but they are mostly in one line, which makes it very difficult to produce precise results. Indicators for that are HDOP/VDOP values. Another aspect might be bad signal/noise ratio as in cities the EM spectrum is in heavy use (not sure about GPS frequencies). Also take into account that a GPS receiver will need more time to fix (getting the satelite atlas and solve equations) due to reduced visibility in metropols.

There are many factors to this but the short answer is like @EvilGenius said: Everything depends on surroundings. Well, almost everything. Due to the satellite orbit GPS has problems near the poles. So in flat, open region it will work better than in the city unless you're in Antarctica.

This also depends what type of GPS you are using. If you are using a VRS (virtual reference station) then yes being out in the country will be more difficult than if you are in the city (assuming your base stations are located in the city, where most of them are) and you are operating outside the zone serviced by the stations. 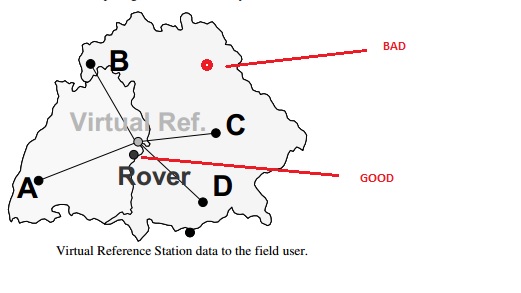 30
Why don't they use cell towers like GPS satellites?
17
Lightsquared GPS controversy: Where is the analysis?
3
What operations do the GPS recievers perform after capturing signal from Satellite?
3
What will happen when Russia shuts down the GPS stations?
3
Computing the elevation angle of a GPS satellite with respect to the given receiver location
5
How does a GPS unit ensure it has the same time reference as a GPS satellite?
3
Using GPS tracking with QGIS and Panasonic Toughpad
2
How does my phone get an accurate reference time for calculating distance from GPS satellites?
2
How does the Phantom 3 4k UAV assign the coordinates/geotag to each photo?
0
Does switching satellites by GPS receiver cause errors?