Are there open access terrain pyramidal map tiles with a permissive usage license like OpenStreetMap's? I'm building aviation-related maps with Polymaps and need a good raster basemap. The Google terrain tiles are just perfect for my purposes: restrained colours, not too many features, and a clear view of terrain. Unfortunately Google does not allow use of their map tiles in any library but their own Javascript.

Alternatives I've tried.. OpenStreetMap's maps all seem to be road maps. The OpenCycleMap does include terrain, but then it has a lot of other high contrast features on top that make it unsuitable for my needs. USGS has some terrain tiles at the National Map, but they're unstyled and lack any descriptive features. I know it's possible to generate and serve my own tileset using a free datasource like SRTM, but that's an awful lot of work to design and operate.

I'm able to pay a modest cost for bandwidth; mostly I want to avoid spending the time generating my own tileset. Terrain maps seem like a common need, I'm surprised I haven't found one!

Edit since posting this question I've found a few more options. Microsoft's Bing Maps include terrain tiles; with somewhat flexible, but limited terms of service. GeoiQ/GeoCommons has the Acetate tiles which are specifically designed for my purpose.

Edit 2 this post had a small part in inspiring Mike Migurski / Stamen's terrain map based on open data. More at maps.stamen.com.

Edit 3 MapBox also now has a terrain layer. I'm unclear about the licensing, but the company is generally open source friendly.

Edit 4 MapZen now has DEM and raster terrain tiles. Again unclear about the licensing, but the company is generally open source friendly.

TopOSM has terrain tiles - though limited coverage (US Only) 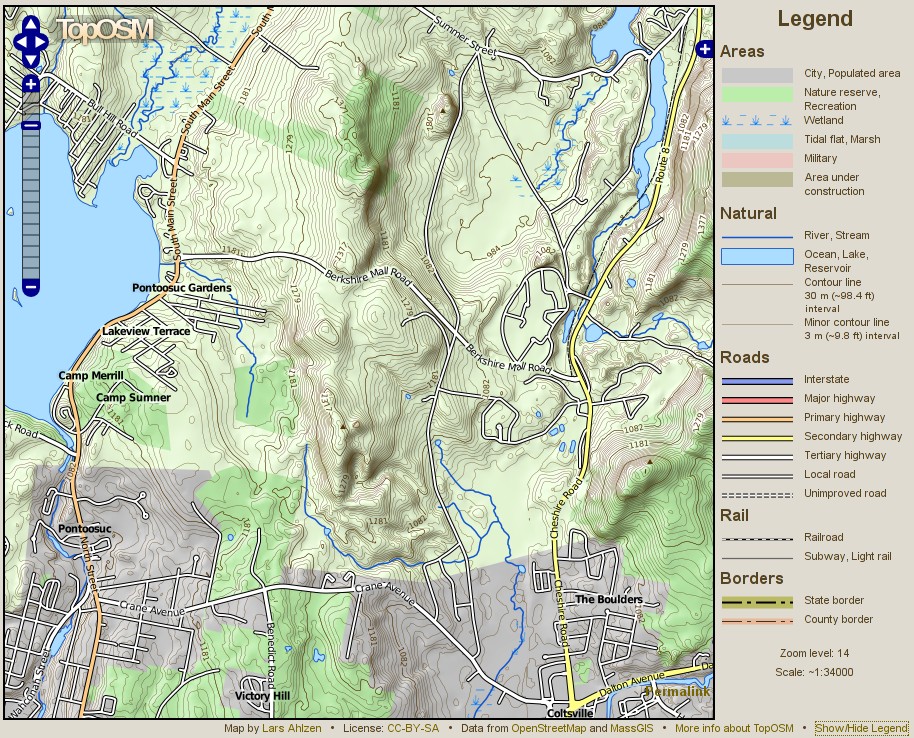 All the Rendering and Source files are available

License is the same as Open Street Map

OpenStreetMap Data is available under the Creative Commons "Attribution-Share Alike" (CC-BY-SA) license. NED and NHD data from USGS, being the work of a US goverment agency, is considered public domain. MassGIS data is free for any use, as long as proper attribution is given. Therefore, this topo map is available under the CC-BY-SA license as well

Mike Migurski (of Stamen Design) recently made a major new open terrain map: details on his blog and I put up a quick map viewer for it. It does terrain relief shading with various DEM sources combined with roads, labels, etc from OpenStreetMap. The source code to generate the map is on GitHub.

You can generate your own using Maperitive:

The Natural Earth 1:10m data is a good place to start, but not at the resolution of the Google Maps terrain data. If you can deal with a medium resolution dataset, then styling something like the 250m SRTM data isn't too bad, but if you're interested in something at a higher resolution, it may be worth contacting the OpenCycleMap folks and see if you can get access to the data prior to the inclusion of the unwanted features.

Another one is Closed Contour Maps

The folks at telascience are starting to revive the OpenAerialMap.org project which is on hold for now. They have already processed NAIP which can be found at http://hyperquad.telascience.org/naip/ They also have world coverage of Landsat done.

As far as contours, elevation, shaded relief, etc, part of the plan is to include SRTM http://srtm.csi.cgiar.org/ (for the entire world) and NED http://seamless.usgs.gov/about_elevation.php for the US. You should hit the IRC #telascience channel on Freenode and ask.

Of course, you can always use the links that I gave you above to download the data and do it yourself with geoserver or mapserver if you wished.

I used Maperitive last night to cut a custom offline map. Very easy, very effective. I tinkered a bit with layers until I had the map of my dreams' for the mountain running map I required.

My guide was this "ten minute" tutorial, which obviously is going to cut short of your needs a bit.

BE WARNED: towards the end of the tutorial, you will get to spot where there is a dead URL for his final example for the actual HTML. I considered this a non-deal breaker, I still made my map work even with limited OpenLayers experience, so you should be OK.

Step 9: Preparing HTML We will need to prepare a simple HTML landing page for our map. The easiest way to this is to reuse the page from my sample map (bad/404 link), but we will need to make a few changes in the code so it reflects our own map area:

The authors "sample" is missing, that page 404's for me anyhow. The good news is, we are working with an offline map at this point, and its OpenLayers so its fairly simple to find another provider of that HTML you need. Here are a couple links, I think you can get your tiles working if you look around.

Not the answer you're looking for? Browse other questions tagged tiles terrain openstreetmap srtm polymaps or ask your own question.

1
Are there any repositories to find custom map tiles for an OpenLayers implementation?
4
How often are MapQuest tiles updated with new OSM data?
3
Why does OpenLayers load OSM-like tiles, but does not show them?
4
Offline map (Google/OpenLayers) for HTML5 (Angular) based hybrid application
4
Does OpenStreetMap have property boundaries?
2
How to use tiles in this strange tiling scheme?
1
Online Map - Vector files postcode lookups - self serve, Mapbox or Gmaps?
7
QGIS 3.0 XYZ Tile 'OpenStreetMap' Text is Too Small to See