I frequently symbolize layers by unique values (e.g. first rock type encountered in an exploration drillhole). This typically results in a layer with 15+ unique rock type all symbolized by the same size of simple/circular marker that is colored differently based on the rock type. The resulting maps that I print are used for interpretation by hand and a common revision that I have to implement is the re-sizing of these layer files.

Is there a method or script that I can use to change the size of all of these symbols in one step instead of manually modifying the size of each rock type's symbol?

Yes, In the symboloby tab of the layer properties you have your list of unique features. If you click on the column heading "symbol" and select Properties for all symbols... (See below) you can change the size of all symbols without losing the individual formatting. 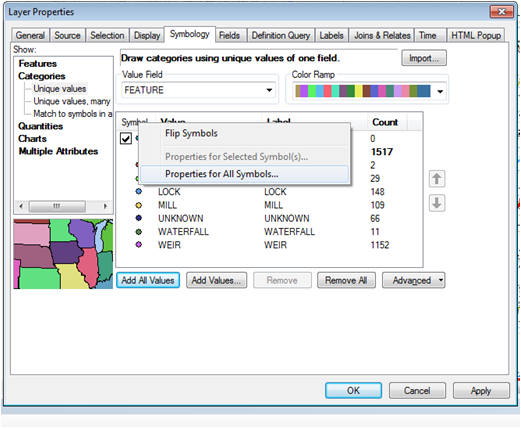 Yes, you can change the symbols in one step, but there will be some setup first.

I'm sure there is an ArcObjects route that would let you edit the symbols directly with a script, but that is far beyond me.

There is also a way to do it with a Python script or a ModelBuilder tool. 1) Make sure all your data matches from one dataset to the next. For the fields that you are symbolizing on (rock type), make sure they stay the same. 2) Set up the symbology for a dataset using the method @MAJ742 suggests. Then Save the Layer to a layer file. 3) Now that you have a layer file with the symbology stored in it, there are two ways to Apply the Symobology to the new datasets. The easiest way is to use the import button in the Layer properties:

Or, you can run "Apply Symbology From Layer". It's really nice if you want to do apply symbology in bulk. This will work as long as the fields being used match from one dataset to another. You might need to add symbology to the saved layer file as you encounter new rock types.

Not the answer you're looking for? Browse other questions tagged arcgis-desktop arcmap symbology or ask your own question.

6
Controlling “Fill Properties” in ArcGIS, so that that symbols are visible in legend?
3
ArcMap point symbol/marker size, How it works?
1
Paper Size and Symbol Size in ArcMap
0
Changing symbol scale in ArcMap legends?
5
Is there a point symbol for ArcMap that looks like the Google Maps Marker Symbol?
2
Updating symbology values/fields shown based on location selection in Data Driven Pages?