I've got a raster of concentrations of iron on Mars and I want to be able to choose several areas of either m by n dimensions in metres, or just any area in m^2, that encapsulate regions that have high concentrations.

What process would you use? Would I create a grid with 50x50 metre cells? Then perform some sort of calculation that tabulates the average cell concentration and output concentrations over some value? I don't have any idea how to do that, but even if I did the areas don't need to be perfect squares so it wouldn't be the best solution just better than not do any analysis. Either way if anyone has any ideas how to choose areas like this either way I'd really appreciate any help.

Find those regions by "region grouping" the cells over 5, then compute zonal statistics of the original grid.

As a running example, here is a small grid in which the darker cells denote higher values: 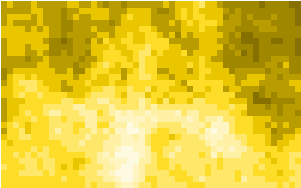 The choice of projection can be important: use an equal-area projection when basing an analysis on relative areas, as done here. For planet-wide work any cylindrical equal-area projection will work provided the poles are of no interest. If the entire planet needs to be analyzed, make separate analyses around each pole and mosaic their results with the rest: this will find regions covering the poles.

To avoid artificial cuts around the +-180 degree longitude boundary, either expand the grid (copy a piece of its left side over to the right, for instance) or conduct analyses in two overlapping hemispheres (East and West) and mosaic the results.

Not the answer you're looking for? Browse other questions tagged arcgis-10.0 arcgis-desktop raster spatial-analyst area or ask your own question.

1
How to remove outlying islands from a DEM raster?

3
Using ESRI.ArcGIS.DataManagementTools.RepairGeometry
5
How to find the area of raster values within polygon zones?
1
Calculating area per range of values (classes) in raster using ArcGIS?
2
Determine the range of values in one raster associated with certain values in another raster
2
Selecting Polygons that have certain raster data within them
3
Finding regions or zones in raster DEM of similar slope or aspect values in ArcGIS for Desktop?
2
Extract cells above certain values of raster file