What is Python equivalent of ModelBuilder's Iterate Feature Selection?

My data consists of two featureclasses:

I am trying to accomplish the following:

The screenshot (Figure 1) shows a ModelBuilder only tool called Iterate Feature Selection. What is the correct Python scripting method to iterate through features in a feature class in order to pass the feature off to the SelectLayerByLocation_management command?

Figure 2 shows the output of the select by location. All 4 layers are the same, which will be a problem when I try and delete points by the canopy % measurement. 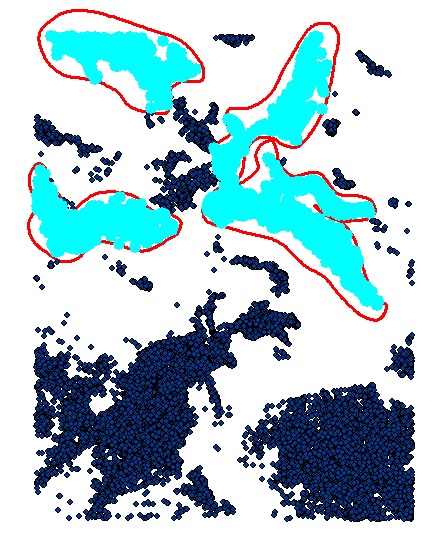 A SearchCursor in arcpy is the most direct route for accomplishing this:

Note that you can use the where_clause property to perform your selection.

Nick Ochoski is right about the SearchCursor, but there is a cleaner way to use it WITHOUT a while and manually calling next:

Not the answer you're looking for? Browse other questions tagged python arcgis-desktop arcpy layers or ask your own question.

2
Loop a Select by Attribute on all features (ArcPy)
3
Parent model that iterates over nested models that iterate over Buffer?

3
How to Select polygon feature in ArcMap and pass Selection into Python Addin?
6
Eliminating small polygons using ModelBuilder to iterate through feature classes?
1
What is the most efficient method to delete points?
1
region growing feature selection using arcpy
2
Using a feature iterator Value variable in a SQL expression of select by attribute
1
Counting points within polygon with ArcPy?