I have an image of a somewhat idiosyncratic projection that is a frame from a film: 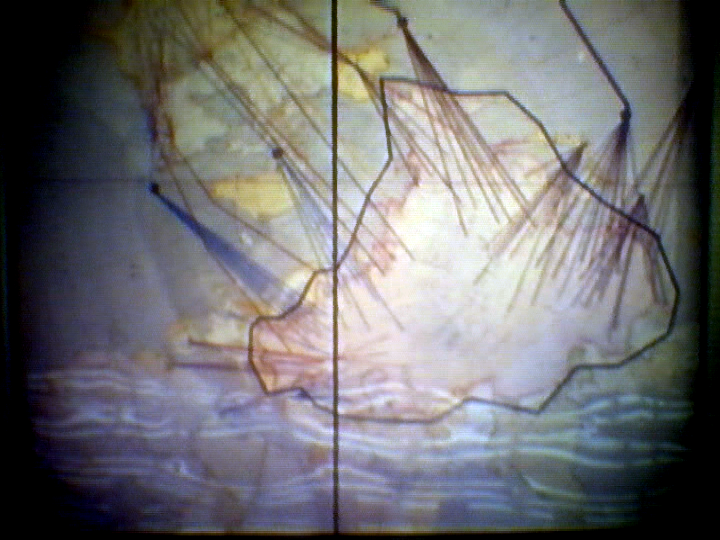 A geographer friend of mine said it was probably some kind of Gnomic projection, but that from the resolution it wasn't possible to know for sure. I wouldn't know.

You can see North America at top left, and the Soviet Union and China (!) in red with a black border around it in the middle-right of the frame. The dark vertical and lighter horizontal lines visible seem to go through the North Pole. As you can guess this is a declassified target map from the Cold War; those branched lines are bomber routes (some from bases, some from refueling points).

I am interested in finding the rough lat/lngs of the ends of the branched lines (the "targets"), knowing, of course, there is going to be a large margin of error because of the resolution,. I could hunt and peck these by hand, working first to identify targets that ought to be on there (e.g. Moscow), but it seems like there ought to be an easier way.

There are plenty of identifiable geographical locations on there, such as James Bay in Canada, the tip of Gujarat in India, the Caspian Sea, and so on.

My first thought was to try line between a number of these by hand in Adobe Illustrator, then draw similar lines in Google Earth, and use them as a rough grid to triangulate the missing points by hand. This is of course difficult. I then thought maybe there was some way to do this algorithmically.

I suspect this might be harder than it sounds, given that I don't really know the projection that produced those pixel locations.

I think the easiest approach would be to geo-rectify your image, then you could get the approximate coordinates directly.

Geo-rectifying is the process of projecting a dataset that is not projected (or unknown projection in your case) using known points in the dataset such as boundary lines and well known landmarks.

You specify the pixel position or original coordinates of a few known points in your dataset and the corresponding projected coordinates and the software will do the rest. Generally the more known reference points the better.

Most popular GIS software has geo-rectifying capabilities. I've personally used ArcGIS and GRASS for the task many times.

Not the answer you're looking for? Browse other questions tagged coordinate-system georeferencing interpolation or ask your own question.

12
How do you find a lat/lon (DMS) on a paper map using a 30cm ruler?
4
How to register shapefiles to an image?

16
Projecting EPSG:4326 data in 2D map?
10
Convert an arbitrary meta-data-free map image into QGIS project
12
Evaluating map projection scale error
4
Create custom projection using either QGIS or ArcGIS Desktop?
6
Are there tools in ArcGIS for drawing compass bearings, and which projection should be used to create a map showing them?
5
Clearing data frame projection of current mxd using ArcPy?
3
Understanding lat/lon to pixel conversion and vice-versa in a geotiff image