This is an entirely separate question, however, as the aforementioned question has established that there are problems with using algorithms (e.g., ArcGIS Flow Direction) that assume Euclidean distance on data in a spherical/unprpojected geographic coordinate system.

We know that map projections are sort of like taking an orange peel and attempting to flatten it out on a desk - you will have some error inherently introduced by the map projection. But, it seems that the benefits of projecting offset any error introduced, particularly when you're running calculations that assume a Cartesian/projected planar surface. In this case, the algorithm I'm interested in is the ArcGIS Flow Direction algorithm which does assume that your data are projected (and this is the assumption taken by most applications based on my research) as it uses a Euclidean approach for calculating distance.

My question is: how could one quantify the error that might be introduced with calculating flow direction in a given study area using unprojected DEM data (DEM data in a geographic coordinate system) vs. projected data (DEM data in an appropriate projection such as a UTM or something conformal)?

What would make the most sense, and what should the unprojected DEM be compared to as a benchmark of accuracy?

Getting into the nitty details of the mathematical equations might, to those that understand it, give you proof at the ground level and be enough for some, but that as well as something that could convey the error to someone that does not have an in-depth understanding of the math but may just know enough geography/GIS to be dangerous would be great (ideally both levels would be good which would resonate with the hardcore geography geeks and the average GIS dabbler). For the higher level folks, saying that the proof is in the math possibly leaves it somewhat open for argument - I'm looking for something more tangible (e.g., akin to attaching a dollar figure to some sort of inefficiency in government).

Any thoughts or ideas on how one might quantify this would be greatly appreciated.

The analysis has already been done in a reply to the antecedent question, but perhaps an illustration will help.

There are two major components of error: the "d8" algorithm, which represents flows in only eight cardinal directions, and the effect of projection (or lack of it). Let's focus on the latter, because this seems to be the principal concern.

The error depends on the distortions in the projection and on the terrain itself. Locally, over a small region, all projection distortions on the earth's surface amount to a stretch in one direction compared a perpendicular direction: this is why a (properly computed) Tissot Indicatrix is a perfect ellipse, because an ellipse is just a stretched circle. The terrain can have any aspect (flow direction). To handle this, let's look at a terrain that indeed has points in all possible directions with simple flow lines: a cone. 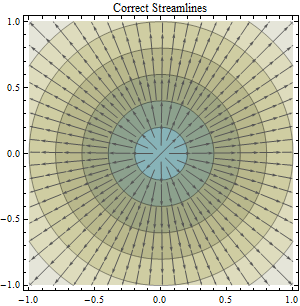 Overlaid on this color-shaded contour map of cone elevation is a collection of streamlines showing the directions where water would flow. You can confirm these streamlines are correct by checking that they cross the contours at right angles.

By choosing appropriate units of measurement and an appropriate origin for the coordinate system (at the cone's apex), the equation for the elevation in terms of coordinates (x,y) is simply

The streamlines are always parallel to the gradient of z (in the reverse direction), computed by differentiating this formula with respect to x and y:

The coefficient 1/Sqrt(x^2 + y^2) doesn't change the direction, so we can ignore it for the purposes of understanding streamlines. Thus, at any location (x,y), the streamline points in the direction (x,y). 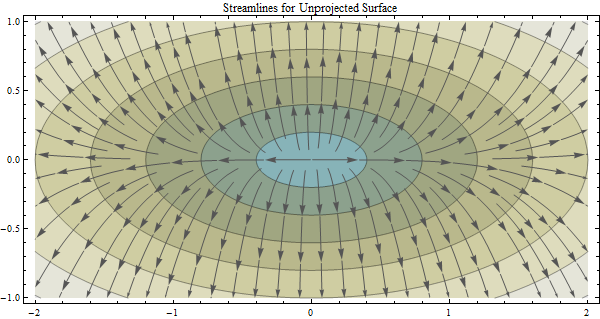 The effect of a horizontal stretch in the coordinates (by a factor of 2 in this image) is to stretch all contours (without changing the contour levels: heights are not affected by projections). Although (of course) the contours represent true circles, they no longer look like true circles on the map. Nevertheless, when the streamlines are computed in these coordinates, they must cross the contours at right angles just as before.

Again the common factor matters not; thus, at any location (x,y), the computed streamline points in the direction (x/stretch^2,y). This was the formula used to draw the streamlines in the preceding picture. You can see they correctly cross the contours at right angles. 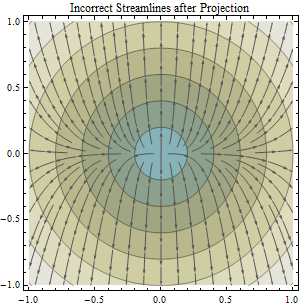 This third image reprojects the previous picture. The surface is shown once more without distortion. However, the streamlines no longer appear to cross the contours at right angles. This was the case even in the previous picture: due to the distortion therein, the angles only appeared to be right angles. The crossings were incorrect all along. That's why not projecting (or using a nonconformal projection) is a mistake. The question is how big a mistake it might be. Some have claimed it's of little consequence (at least at low to moderate latitudes).

This reprojection (to remove distortion in the map) moves the point at (x*stretch, y) back to (x,y). The stream direction previously computed at this point was stored in a grid (as an angle or a direction code): it does not change. Therefore the computed stream direction at (x,y) is (x/stretch^2, y).

This quantifies the effect of a reprojection on all possible flow directions, as shown by the difference between the first and last graphic. Here's their overlay, without the contour plot for distraction: 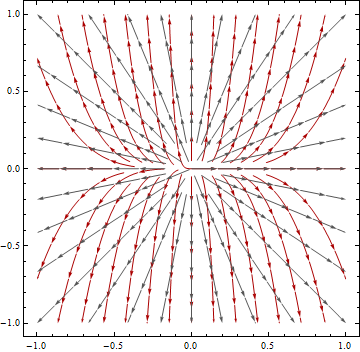 Reprojection affects directions differently depending on how the flow is oriented with respect to the major axis of the Tissot Indicatrix. It is a quadratic function of the relative linear distortion in the projection. As such, it exaggerates even slight amounts of distortion. (The factor of two illustrated here is somewhat extreme but realistic: it is the distortion introduced by failing to project--that is, using geographic coordinates as map coordinates--at latitudes of 60 degrees.)

With a little bit of trigonometry one can use these results to compute the angular error in flow direction as a function of the correct direction. Here is a graph of the errors associated with using a geographic (unprojected) coordinate system at latitudes 20, 30, 40, 50, and 60 degrees. (Of course the larger errors are associated with higher latitudes.) 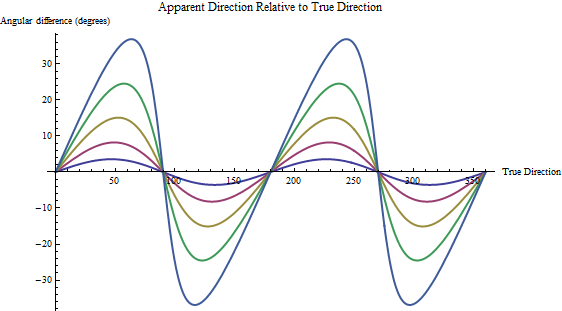 The "true direction" is in degrees east of north. Positive angular differences occur when the apparent direction (computed without projecting lat, lon) is counterclockwise of the true direction.

Remember, you have to superimpose the d8 errors on top of these!

Not the answer you're looking for? Browse other questions tagged coordinate-system hydrography gis-principle or ask your own question.