I am trying to get my head around PostGIS and QGIS. I'm trying to find the area (in white) bounded by three multipolygons (in purple) - refer to picture. Each multipolygon only touches the other two multipolygons; there are no intersections.

More info: The purple areas are defined as multipolygons in the PostGIS table. I'm interested in just the coordinates for the white area. The coordinate reference system is WGS84.

Basically, the purple areas are maritime boundaries/EEZs which have been defined in the postgis table. The white area refers to international waters/high seas pockets between those maritime boundaries. I'm trying to identify the coordinates of the white areas so that I can create records for them in the same postgis table that has the EEZs. I'm building a web-app for monitoring vessel movements near real-time between EEZs and high seas pockets. 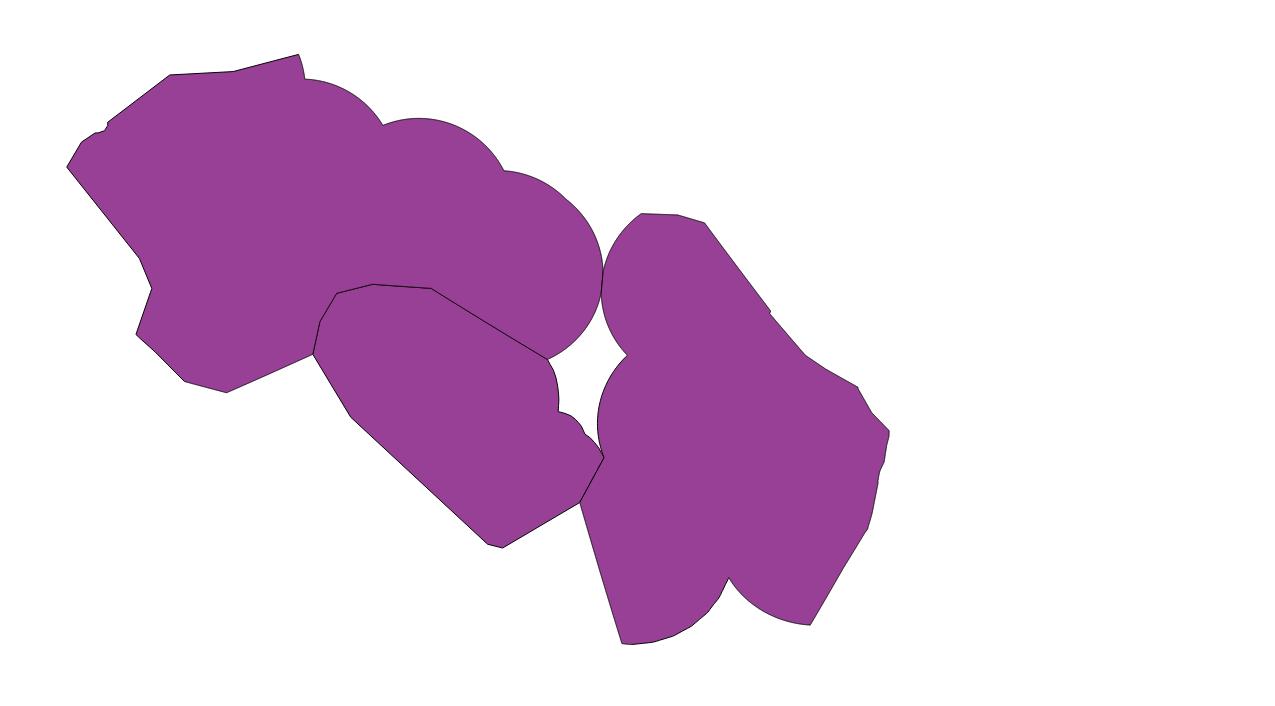 Do it in SQL (might get funny results when there is no bounded area...)

Basically, if you subtract the thing-with-hole from the bounds-of-thing, you get just the hole. Alternatively, if you know you're only going to have one hole, you could just use the ST_InteriorRing() function to extract the bounds of the hole from the results of ST_Union().

This will create an additionnal polygon at the center

What you're describing sounds like geofencing. To do this, you probably want to decide if you want the white areas to be one polygon, a collection of polygons (a Multipolygon type), or separate polygons. If you're tracking ships in maritime waters, you probably want to know exactly what areas they're transiting through, but if not, I'd recommend @BradHards suggestion to just draw a large polygon for the whole extent and then subtract the area of the polygons to get the white area you're interested in.

To draw a large polygon in QGIS, follow these directions from the QGIS manual. You can also use this method to manually draw your polygons if that's easier for you. Use the union and difference tools in QGIS to get the polygon or polygons you want.

To create a large polygon directly in PostGIS, you'll want to use ST_GeomFromText and pass in your type, coordinates, and SRID. You'll then want to use ST_Difference to subtract the area of the other polygons. Here's an interesting reference from BostonGIS.

To get one multipolygon of the white area, I'd use ST_Union to get the union of the three areas and then use ST_Difference and hope PostGIS automatically casts the object to a multipolygon. I'm not near a computer to test this, but it would look like:

The "id" value is just a dummy assuming your polygons have a serial from 1-3. The four points (, ...,) will define the larger polygon. You can nest the ST_Union call if it doesn't like three geometries: