So I'm making a bike commuting map for our area, and one of the features to show (common on a lot of bike maps) is some type of road grade marker.

We're planning to show three categories: 'kinda steep, pretty steep, and crazy steep' - we're not planning to use those names - but you get the drift. (Actually, four categories - anything less than the first category just doesn't get a marker.) The markers are one, two, or three arrows - here's a clip: 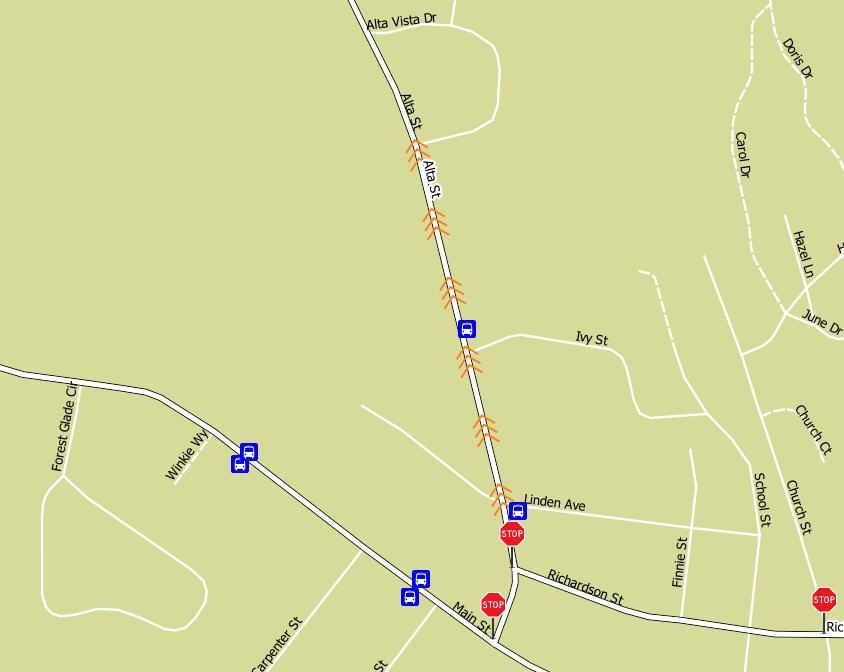 The problem: since we live in the foothills - not much flat stuff around here - the task of getting all the grade markers right is pretty daunting and tedious. So - it would be nice to automate it.

So I've got the DEM for the area from the NED, and got a nice slope raster from it (thanks to folks that helped figure that out). Overlaying that on the bike map (the roads are a vector layer of course), you can see a way to conceptually automate this task. Basically, making a vector layer that is the boolean AND of the roads layer and the slope layer of certain values (whether by categorizing the slope layer, or by making separate slope layers per grade range ahead of time) should get it done. I'd want the output to be a vector layer. But, I'm not quite clear on how to do all that. Suggestions on workflow?

I realize this concept doesn't account for direction (which way is uphill) so I'll plan on doing that by hand (flipping the vector selections as needed, or, doing so with an attribute that is used by the style to decide which way to draw the arrows)

UPDATE: this will be done in QGIS 2. A thought: make a vector layer (of shapes) out of raster categories, i.e. a vector shape of areas with slope between 5 and 10 degrees (this would cover one of the categories of steepness), then do a boolean AND of that layer with the roads layer; so now you have a bunch of disjoint lines; that's exactly what is needed; just style these lines with the double-arrow (or as appropriate for that category), and flip direction of each segment as needed (which is easy to do from memory or from a map if needed).

I have created a QGIS plugin called walking times, and I believe that the algorithm used is quite close to what you need to calculate the average slope of each line. Actually I was thinking in adding accumulated ascend, accumulated descents and the mean slope to it.

The python algorithm is quite simple:

You can check the code in the git repository of the project. See the time_calc() function

This does not answer your question, but I think it can point you to a better solution.

Well, after more inspection of the DEM and the derived slope layer, I don't think they aren't really accurate enough to use in any sort of straightforward automation.

Basically, looking at the slope pixel values along a few known very-even-grade but steep roads, the slope layer values vary a pretty fair amount over the course of said road - enough to span two or even three of the arbitrary steepness categories.

So, you could come up with some sort of averaging algorithm to make it possible, and you could plug that in to the flow described below, but at this point I think it's more expedient to overlay a range of the slope values (Layer Properties -> Style -> Band Rendering -> Contrast Enhancement = stretch and clip to minmax, then set the min and max to the range of slopes you want to see, example: 2.25 and 13.5 (corresponding to 5%-30% grade)) and use that as a visual guideline; then just copy road segments to the appropriate grade-marker layer, and clip the ends of the lines (with the scissors) to taste; of course if you are setting grade with an attribute you would take different steps there.

Anyway if the DEM were perfect, automation would probably go something like this: 1) make one raster per 'slope range' 1a) on the main slope raster, Properties -> Style -> Band Rendering -> Contrast Enhancement = Clip to MinMax - this will render just one color of gray for the entire range you specify; for 'kinda steep' I'm using 2.25-4.4999; 'pretty steep' = 4.5-6.749999; 'way steep' = 6.75-30 ('15% grade or steeper'). 1b) in the layers list, right click the main slope raster layer, select Save As... Output mode = Rendered image - I haven't actually tried but this should make one raster of the currently displayed range, and all pixel values in that generated layer are the same 2) for each 'slope range' raster, convert the layer to vector using Raster -> Conversion -> Polygonize 3) Vector -> Geoporocessing Tools -> Clip; Input vector layer = the roads layer; Clip layer = the newly polygonized 'slope range' vector layer; Output shapefile will hold disjoint lines which are the road segments at the specified slope range. Style these with no line, just the appropriate number of arrows / hash marks / granny gear symbols etc.

If anyone does come up with a nice averaging algorithm to carry out this automation using the normal 10m DEM-derived slope, that would win!

0
Converting arcpy based python script to OGR for semi-automated Metadata creation
0
Semi Automated Classification plugin (QGIS) error when trying to create ROI
0
How to operate with vectorized data in QGIS?
1
QGIS: GRASS "V.net.iso" + Slope
4
Service Area (ArcGIS), including slope as a cost
3
Symbology for traffic direction into and out of city