What are the benefits of hexagonal sampling polygons?

I am always on the lookout for useful methods to sample or partition study areas (usually in the form of raster datasets) into smaller units. Recently, I read an ESRI blog post about a new tool for creating sampling hexagons. Although the hexagons are an eye catcher, my first thought is that they are more complicated and contain more vertices than, for example, a fishnet grid which could accomplish the same goals. What are the benefits of working with hexagonal grids over rectangular grids for study area sampling or partitioning raster datasets? 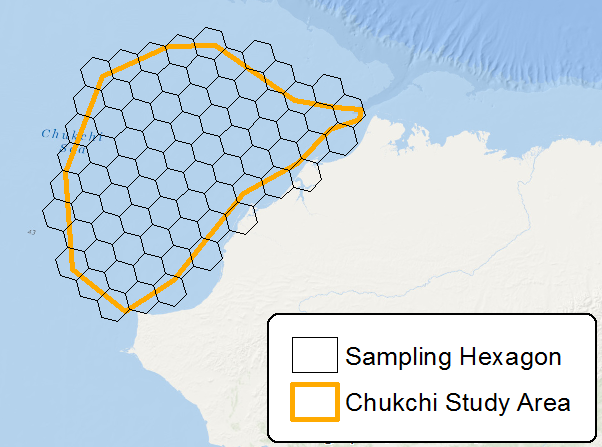 The idea with hexagons is to reduce sampling bias from edge effects of the grid shape, which is related to high perimeter:area ratios. A circle is the lowest ratio, but cannot form a continuous grid, and hexagons are the closest shape to a circle that can still form a grid.
Also, if you are working over a larger area, a square grid will suffer more from distortion due to curvature than shapes like hexagons.

There are a number of tools and extensions for creating and using hex grids for ecological/landscape analysis, Patch analyst (Rempel et al., 2003) being a good example, that also provides a large volume of landscape metric measurement capacity. The former Hawth's Tools, now redesigned as the Geospatial Modeling Environment has a wide array of tools that were developed to fill in gaps in arcgis functionality, including repeating grids. A number of third-party extensions have been made for this sort of thing, usually by the researchers who need them, so they frequently don't have the resources to rebuild their products after every new GIS version is released, so it often seems like there is nothing available

This paper (Birch, 2007) also presents a thorough comparison of rectangular and hexagonal grids for ecological applications, showing how hexagonal grids are preferable when issues of connectivity, nearest neighbourhood or movement paths are crucial aspects to be considered in the analysis.

One of the benefits, that I've seen when doing wildlife or habitat modelling especially, is that hexagons allow patterns in the data (ex, edge of a field or any other patch) to be seen more easily than what squares would of offered.

Think of a soccer ball too, though not always hexagons, those geometric shapes fit to a curved surface quite nicely.

In your image, try creating smaller hexagons and they would get close to the actual shape of the polygon. Then try computing a rectangular/square grid over the same region with a similar width or height and you can see the difference.

The hexagon is the most complex regular polygon that can fill a plane (without gaps or overlap).

I can see two advantages:

There are also two drawbacks :

In your case, there is another drawback because you want to partition a raster. Indeed, raster cells are square-based as is the raster extent. So, if you try to partition a raster using hexagon, it will not be possible to avoid partially included pixels. You will therefore rely on some kind of resampling strategy which will affect the quality of your data. Furthermore, any clipped raster based on hexagon will result in a proportion of NoData pixels.

A key disadvantage of grid squares is that the sample rate is substantially lower along the diagonal vectors to those of the four sides (Jasons point above).

If you have some regular linear pattern to your data the orientation of the grid affects the effective sample rate of each context.

For example if you have a series of ridges and valleys, orienting the grid along these might only sample the valley or the tops and thus the type of vegetation or fauna to be found. Some other angle relative to the valleys would give a shifting sample rate between high and low over the region. A good example of such a problematic vector in an aquatic might be tidal range, sea depth, undersea ridges an so forth.

Obviously, the effect can be mitigated or exacerbated by choice of sampling resolution, but ideally the sample rate to variance ratio should be stable over space. Hexagons, being closer to a circle, are less likely to accidentally cause such variable sample rate bias.

As a climate change researcher, my biggest take on hexagon grid system is mainly two benefits:

You may refer to one of my repositories for more details; https://github.com/pnnl/hexwatershed

Not the answer you're looking for? Browse other questions tagged polygon analysis sampling or ask your own question.

14
What practices are available for modelling land suitability?
7
What sampling tools are available in QGIS?
6
How to computational efficiently check if there are any overlapping polygons in a group of polygons?
5
What are some user-friendly GIS alternatives to Alteryx and ArcGIS?
1
QGIS point sampling tool really slow for polygons?
1
Sampling one shapefile with polygons of another using R?
4
Counting polygons in one layer that are overlapping/touching/contained in each polygon in separate layer of contiguous polygons using QGIS?
2
Converting clustered hexagonal grid units into polygons
2
Randomly sampling polygons from polygon grid using the spatialEco package in R