How to write all attributes when multiple source files have the same name?

I am using FME to write all the MapInfo TAB files in a directory and it's subdirectories to a File Geodatabase. I'm using dynamic readers and dynamic writers as I don't know the geometry or schema of the input files beforehand. So far so good. Now, suppose that I have a file called "Pipeline.TAB" at the root of the directory and I have another file called "Pipeline.TAB" in a subdirectory. No problem. FME can merge the two files together and I get the geometry from both files in my new feature class called "Pipline_line".

It appears that the schema is determined by the first feature that is being read, whereas, I need it to use the schema from all of the features with the same name. Is this possible?

I have posted this question on FMEPedia as well. Here is some additional information which may help:

The example I gave was simple in that it only had two files called Pipeline.TAB. In reality, I'm looking at dozens of folders with thousands of files. there might be 20 files called "Pipeline" and another twenty called "Valves", etc. I won't know the schema of all of them at the start.

In the final file, there may actually be many fields. But I won't know all of them at the start:

In response to @BradNesom's answer, I have looked at the SchemaMapper, but I have way too many files to look at for that to be feasible. I also have looked at the other link you mentioned and I tried adding a reader as a resource but that didn't seem to work either.

Yes it is possible.
How would be the rest of your question.
Using the schema mapper transformer is a great direction but if you have "lots" of different files with no good way of cataloging all the variety.
In this fmepedia article there are multiple examples.
I like the attributerenamer method.
But there is another that allows the schema to be read at run time.
Specifically, the Dynamic Schema functionality provides two options for determining the destination schema information at run-time:
from a reader already in the workspace (Source Reader),
from a reader added as a Workspace Resource (Workspace Resource Reader).
EDIT:
I just found the collectors section on fme store. 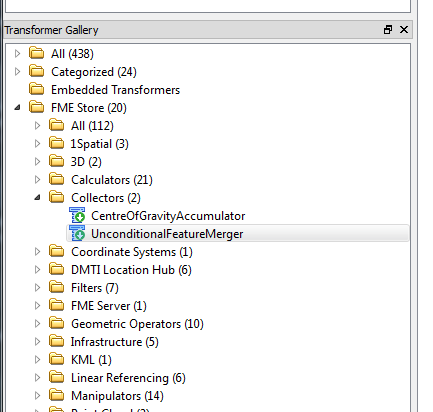 This transformer merges sets of attributes onto all REQUESTOR features. Essentially it is an unconditional merge of feature attributes.
The user can choose between two modes:
One Supplier, or All Suppliers.

I don't think what you're hoping for is possible. You will always need to have some special cases. Here's the two ways I suggest you do it:

Finally, how many duplicate names do you actually have? If you only have a dozen, why not run the first script to import everything, and then have a second that handles the special cases.

Sometimes you can't automate everything!

Not the answer you're looking for? Browse other questions tagged mapinfo spatial-database fme fields-attributes or ask your own question.

6
GIS Database Migration Project (Oracle to ArcGIS)
4
FME - How to add an attribute when schema definition is dynamic?
2
Feature Class to Feature Class Keeps Layer Name In Fields 10.2?
0
Populating an fc field based on the Count of a unique attribute
0
FME 2019: Generate a new PK based on a concatenation of a string and a three digit increment
0
FME retrieve zip filename