Does ArcGIS for Desktop support SpatiaLite?

SpatiaLite is playing an increasing role in my organization.

As it stood in 2012, using SpatiaLite alongside ArcGIS Desktop required an amount of importing and exporting of data that was not always trivial.

Outside of products such as the Data Interoperability Extension or FME, what other options are there for SpatiaLite support in ArcGIS for Desktop?

I started an open source GDAL/OGR ArcGIS plugin project this weekend that gives read support to spatialite and any other OGR vector data source like Google Fusion Tables.

I have it working locally reading spatialite and will cleanup and push the rest of changes this coming Friday. I hope you find it useful.

OK, got it working today. The following is a spatialite file being read from ArcGIS 10.1 natively. 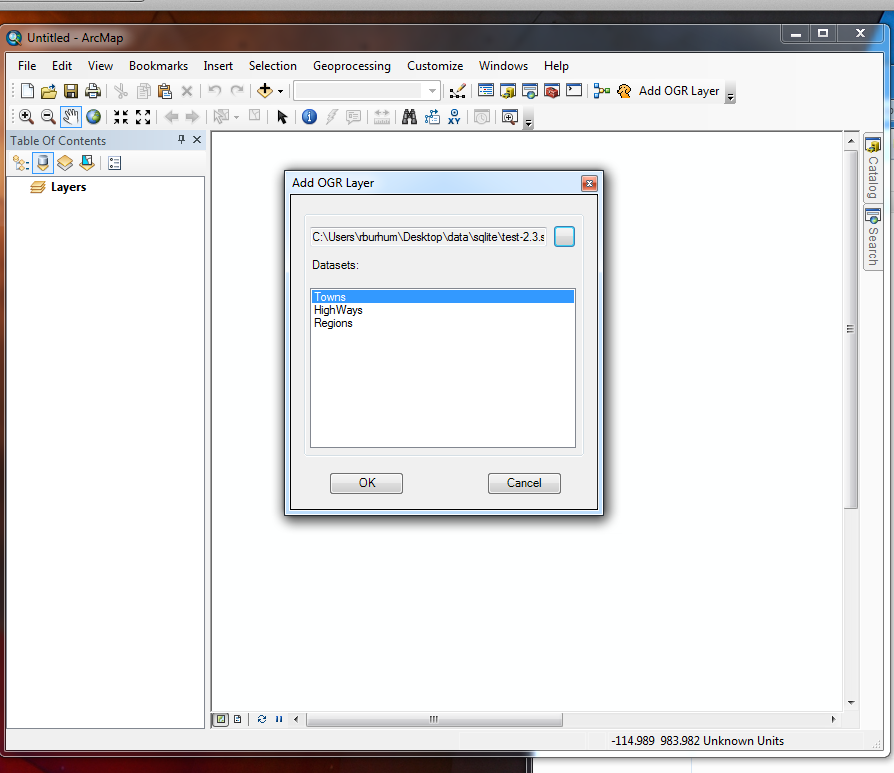 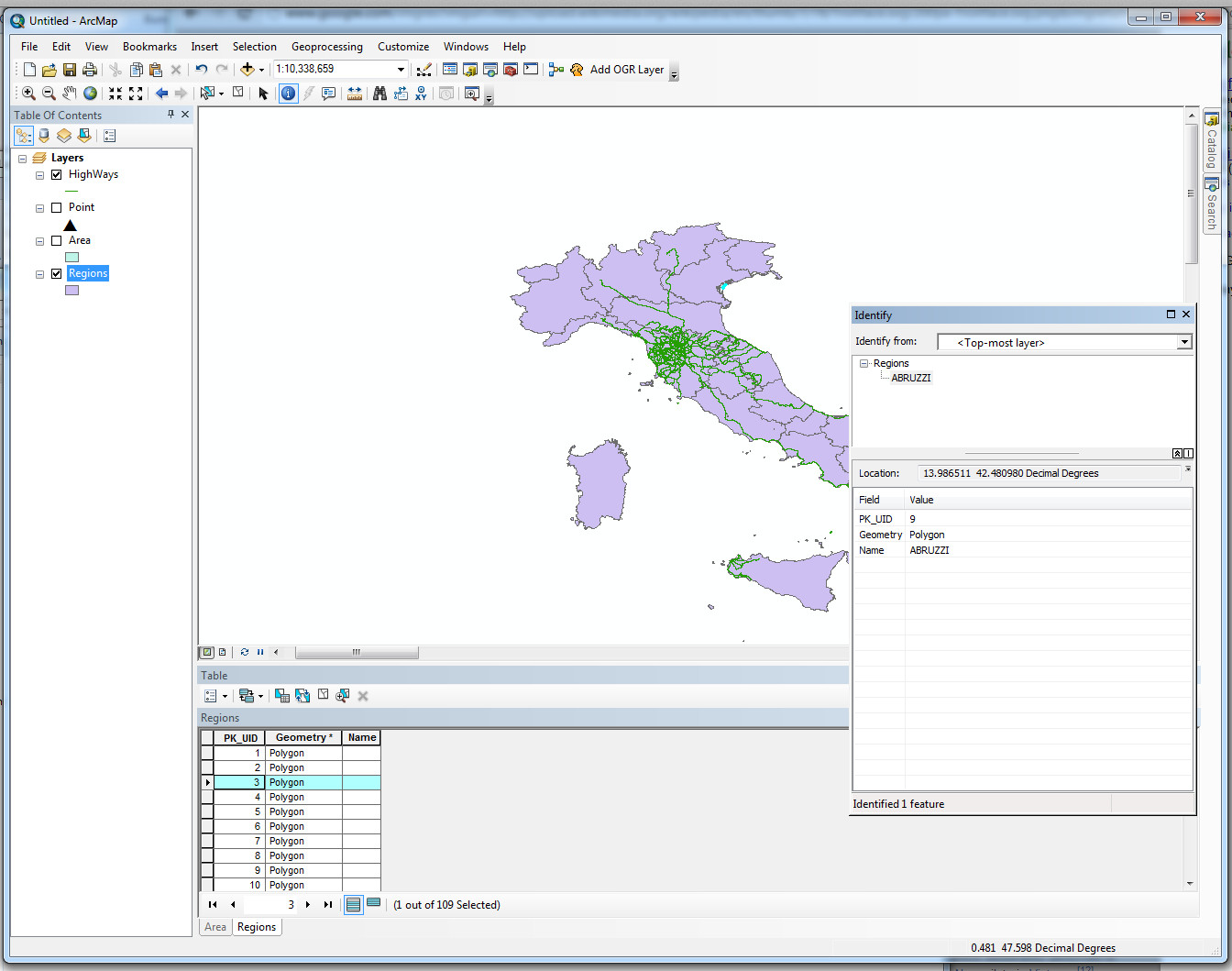 Since it uses GDAL/OGR, it doesn't just read spatialite but it also adds support to a gazzilion other formats.

For example, this screenshot is a mix of reading S57 ENC files with spatialite: 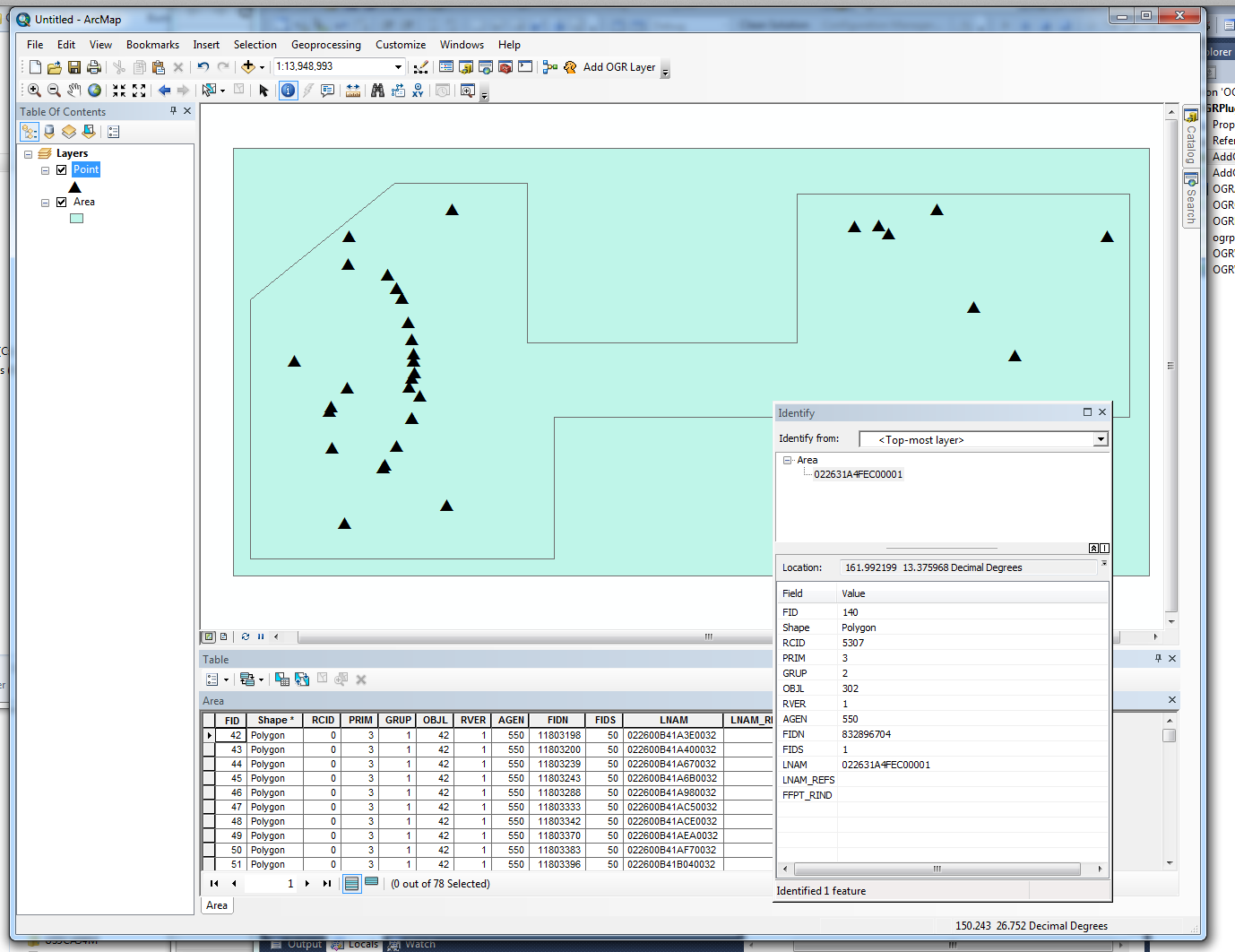 If you want to test the binaries, that would be helpful, so I can add them for anyone else.

SpatiaLite support was added to ArcGIS for Desktop at the 10.2 release:

You can connect from ArcGIS to an SQLite database to create maps and perform spatial analysis on your data.

You connect directly to the SQLite database file from your ArcGIS client.

It is not possible to use layers based on SQLite/SpatiaLite for editing with the core product, but I have not tested with Data Interoperability in the mix.

On Google Code, I found that Umbriel ArcGIS Desktop Tools have a project called Umbriel.ArcGIS.Spatialite but I haven't found any documentation on it yet.

I don't know of any as of yet but I bet you could approach the ZigGIS folks for support. I know ZIG only does PostGIS now but both databases have the same functionality.

Once ESRI finally gets rid of SDE/ArcGIS Server database and supports direct connections to ST_ compliant databases then there will be much rejoicing!

This really isn't an answer, but I imagine it would be interesting to some folks. As has been pointed out in the comments we'll be extending zigGIS's reach by having a generic "provider" model so that other datasources such as MS SQL Server, Oracle, and, yes, Spatialite can be easily plugged in. For Spatialite support we hope to work closely with Jay. We're hoping to break ground on zigGIS 3.0 by summer's end.

Not the answer you're looking for? Browse other questions tagged arcgis-desktop spatial-database spatialite or ask your own question.

12
Documenting inability to Start Editing SQLite geodatabase layers in ArcMap?
9
Is there a way to create a Personal Geodatabase in QGIS?
2
Using SQLite for multi-editors in ArcGIS?

22
How to export shapefile to SpatiaLite
14
Standard for storing human metadata in spatial databases
10
How does Spatialite handle concurrent access?
0
which spatial server goes better with raster images stored in DB Spatialite?
4
Fixing ogr2ogr without spatialite support?
3
Which version of Spatialite does QGIS support?
5
Can true curves be copied into Spatialite from ArcGIS Desktop?
6
Does GeoPackage support simultaneous editing?