I am attempting to improve a currently extremely cumbersome vector/python process for a natural hazard model. At the moment we have a lengthy script which generates distance/bearing lines from a given point to determine:

There's a lot more involved but that's the gist of it. I am trying to find a way to improve this and am currently stumped on part 3. The idea is to determine if a point is completely surrounded by polygons, within say 200m 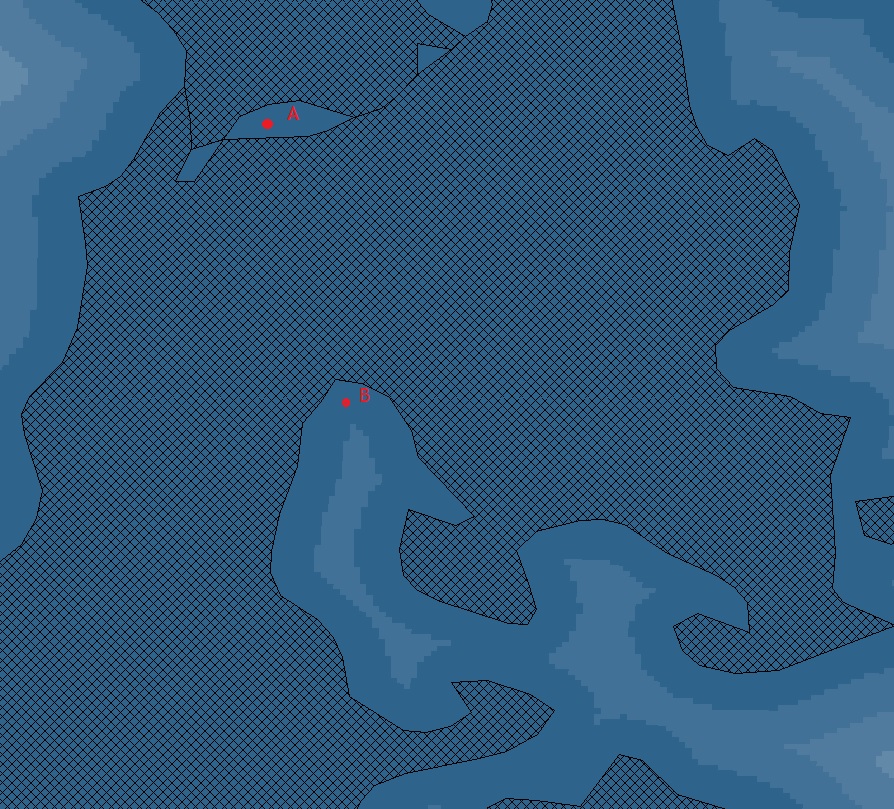 So in my attached image, I would want point A to be marked as being at higher risk than point B as it is completely surrounded by my polygons. This is repeated for about 13 million points so is not a small task and I would rather have a surface to derive values from, rather than running our script. I'm thinking there's got to be a variation of hydrology tools or cost-path to do this but I can't seem to get my head around it.

How could I go about this?

There is a cost-path solution but you will have to code it yourself. Here is what it might look like when applied to every point in the image in the question (coarsened a little to speed up the calculations): 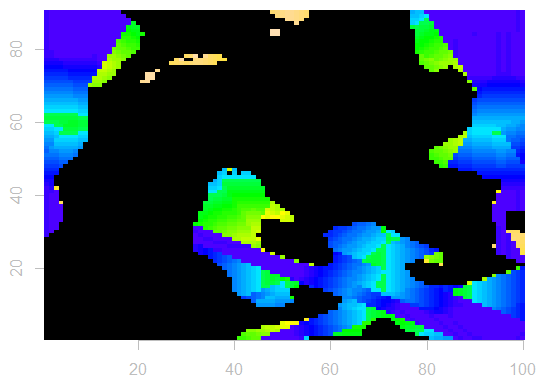 The black cells are parts of the surrounding polygons. The colors, ranging from light orange (short) through blue (long), show the maximum distance (out to a maximum of 50 cells) that can be reached by line-of-sight traversal without intercepting the polygon cells. (Any cell outside the extent of this image is treated as part of the polygons.)

Let's discuss an efficient way to do that using a raster representation of the data. In this representation all the "surrounding" polygonal cells will have, say, nonzero values and any cell that can be "seen through" will have a zero value.

You first have to decide what it means for one cell to block another. One of the fairest rules I can find is this: using integral coordinates for rows and columns (and assuming square cells), let us consider which cells might block cell (i,j) from the view at the origin (0,0). I nominate the cell (i',j') which is closest to the line segment connecting (i,j) to (0,0) among all cells whose coordinates differ from i and j by at most 1. Because this does not always yield a unique solution (for instance, with (i,j) = (1,2) both (0,1) and (1,1) will work equally well), some means to resolve ties is needed. It would be nice for this resolution of ties to respect the symmetries of circular neighborhoods in grids: negating either coordinate or switching the coordinates preserves these neighborhoods. Therefore we can decide which cells block (i,j) for i >=0, j>=0, and i >= j and use these symmetries to determine the remaining blocking relations.

Illustrating this rule is the following prototype code written in R. This code returns a data structure that will be convenient for determining the "surroundedness" of arbitrary cells in a grid.

The value of screen(12) was used to produce this depiction of this screening relation: arrows point from cells to those that immediately screen them. The hues are proportioned by distance to the origin, which is at the middle of this neighborhood: 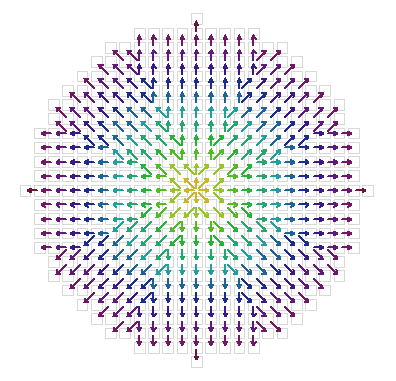 This computation is fast and needs to be done only once for a given neighborhood. For instance, when looking out 200 m on a grid with 5 m cells, the neighborhood size will be 200/5 = 40 units.

The rest is straightforward: to determine whether a cell located at (x,y) (in row and column coordinates) is "surrounded" with respect to this neighborhood data structure, perform the test recursively beginning with an offset of (i,j) = (0,0) (the neighborhood origin). If the value in the polygon grid at (x,y) + (i,j) is nonzero, then visibility is blocked there. Otherwise, we will have to consider all the offsets that could have been blocked at offset (i,j) (which are found in O(1) time using the data structure returned by screen). If there are none that are blocked, we have reached the perimeter and conclude that (x,y) is not surrounded, so we stop the computation (and do not bother to inspect any remaining points in the neighborhood).

We can collect even more useful information by keeping track of the furthest line-of-sight distance reached during the algorithm. If this is less than the desired radius, the cell is surrounded; otherwise it is not.

Here is an R prototype of this algorithm. It's longer than it seems, because R does not natively support the (simple) stack structure needed to implement the recursion, so a stack has to coded, too. The actual algorithm starts about two-thirds of the way through and needs only a dozen lines or so. (And half of those merely handle the situation around the edge of the grid, checking for out-of-range indexes within the neighborhood. This could be made more efficient simply by expanding the polygon grid by k rows and columns around its perimeter, eliminating any need for index range checking at the cost of a little more RAM to hold the polygon grid.) 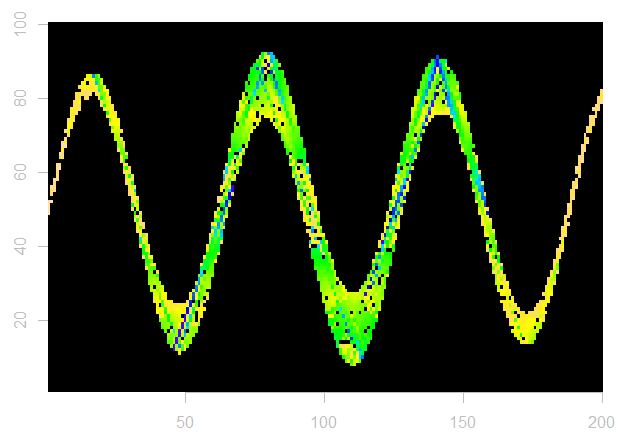 In this example, polygonal cells are black. Colors give the maximum line-of-sight distance (out to 50 cells) for non-polygonal cells, ranging from light orange for short distances to dark blue for the longest distances. (The cells are one unit wide and high.) The visibly evident streaks are created by the small polygon "islands" in the middle of the "river": each one blocks a long line of other cells.

Analysis of the algorithm

The following behavior is typical of what will be encountered. For small values of k, unless the polygons fill most of the grid, most non-polygonal cells will be obviously unsurrounded and the algorithm scales like O(k). For intermediate values, the scaling starts looking like O(k^2). As k gets really large, most cells will be surrounded and that fact can be determined well before the entire neighborhood is inspected: the algorithm's computational effort thereby reaches a practical limit. This limit is attained when the neighborhood radius approaches the diameter of the largest connected non-polygonal regions in the grid.

As an example, I using the counting option coded into the prototype of screen to return the number of stack operations used in each call. This measures the computational effort. The following graph plots the mean number of stack ops as a function of neighborhood radius. It exhibits the predicted behavior. 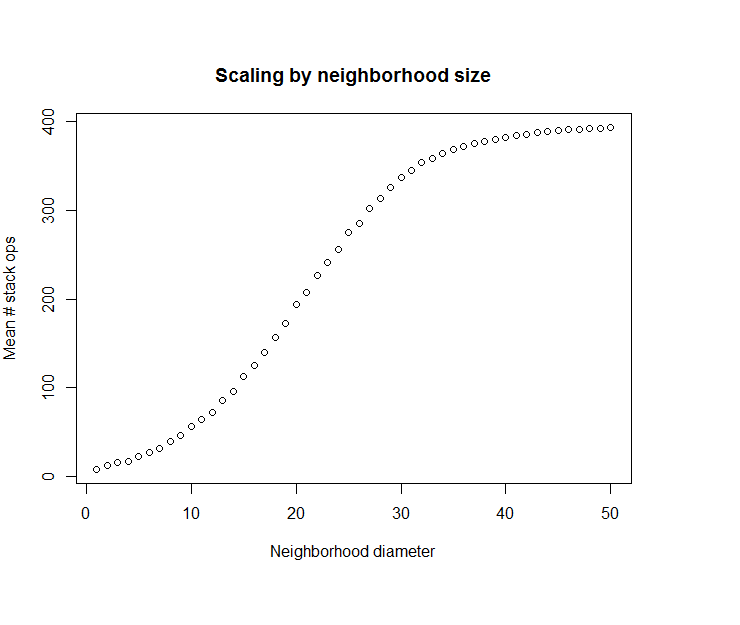 We can use this to estimate the computation needed to evaluate 13 million points on a grid. Suppose that a neighborhood of k = 200/5 = 40 is used. Then a few hundred stack operations will be needed on average (depending on the complexity of the polygon grid and where the 13 million points are located relative to the polygons), implying that in an efficient compiled language, at most a few thousand simple numeric operations will be required (add, multiply, read, write, offset, etc.). Most PCs will be able to evaluate the surroundedness of about a million points at that rate. (The R implementation is much, much slower than that, because it is poor at this kind of algorithm, which is why it can only be considered a prototype.) Accordingly, we might hope that an efficient implementation in a reasonably efficient and appropriate language--C++ and Python come to mind--could complete the evaluation of 13 million points in a minute or less, assuming the entire polygon grid resides in RAM.

When a grid is too large to fit into RAM, this procedure can be applied to tiled portions of the grid. They only have to overlap by k rows and columns; take the maxima at the overlaps when mosaicing the results.

The "fetch" of a body of water is closely related to the "surroundedness" of its points. In fact, if we use a neighborhood radius equal to or greater than the waterbody's diameter, we will create a grid of the (non-directional) fetch at every point in the waterbody. By using a smaller neighborhood radius we will at least obtain a lower bound for the fetch at all the highest-fetch points, which in some applications may be good enough (and can substantially reduce the computational effort). A variant of this algorithm that limits the "screened by" relation to specific directions would be one way to compute fetch efficiently in those directions. Note that such variants require modifying the code for screen; the code for panvisibility does not change at all.

I can definitely see how one might want to do this with a raster solution, but given even a reduced # of points, I would expect a very large/high-resolution and therefore hard to process grid or set of grids. Given that, I wonder if exploiting topology in a gdb might be more efficient. You could find all the internal voids with something like:

you can then work with topoErrorsVoidPolys in your normal pattern of Intersect_analysis() or whatever. You may need to mess around with extracting the polys of interest from topoErrorsVoidPolys. @whuber has a number of pretty excellent posts on this kind of stuff elsewhere here on gis.stackexchange.com.

If you really want to go raster...I would do something along the lines of this pseudo code (don't cringe just 'cause it's obvious I'm an AML throwback! :p )

Just kind of making that up, so might need refinement.

If you use a threshold distance value (here you talk about 200 m), then the best solution is to use vector analysis:

2) use the intersect tool (analysis) between the buffer and the polygons (in blue on the illustration). It will look nicer if you do this between the boundaries of the surrounding polygons and the buffer, but the final result is the same.

4) select layers by location (management) or spatial join (analysis) to identify the points that are surrounded. The use of spatial join allows you to have an information about the embedding polygon (area of the polygon, zonal statistics...) which could be useful for further processing.

Alternatives 2b) Depending on your needs, you could select by location the surrounding polygons within a 200 m distance, you can then identify some kinds of "enclosure" but not as strictly as in 2). 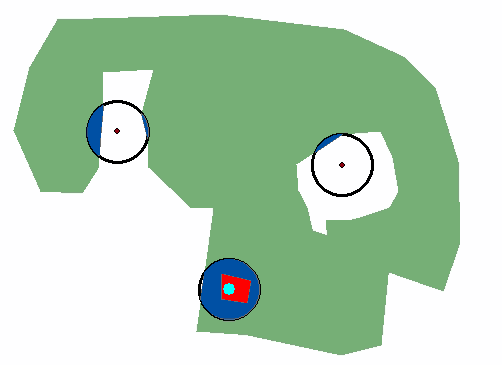 Considering the "maze case", this could help : evaluate how long it is to "escape" from the location.

Not the answer you're looking for? Browse other questions tagged arcgis-desktop raster arcgis-10.0 or ask your own question.