Does anyone know what a geoid10 and its numbers mean?

I am doing home for my GIS class where we had to download census data from our county and to define what geoid10 and its numbers mean. I cannot find the definition anywhere.

GEOID is the field used to join TIGER/Line geographic data to the demographic data in various American Community Survey products and in the Decennial Census. It is slightly confused by the fact that this field is called GEOID10 only in the TIGER/Line 2010 products (in fact, almost all of the field names in TIGER/Line 2010 end in 10), and by the fact that the actual code is different in the geographic and demographic products and has to be manipulated for the join to work.

In the ACS, GEOID begins as follows:

After those 7 characters which are not present in the TIGER/Line products, the ACS GEOID and TIGER/Line GEOID[10] fields will match. The code will be a concatenation of the code of every geographic entity in the hierarchy of that record. For a tract, this may be two digits for the state FIPS, three digits for the county FIPS, and six digits for the tract code—or it may not, because another version of the census tract (summary level 080) follows the hierarchy State-County-County Subdivision-Place/Remainder-Census Tract. 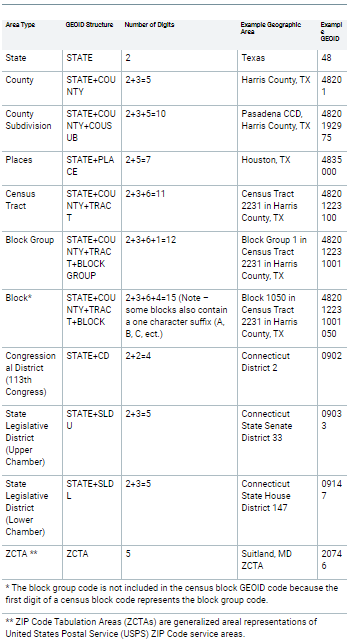 Not the answer you're looking for? Browse other questions tagged census united-states or ask your own question.

39
Seeking 2010 Census Block data
8
What does the code RTTYP represent in the USA Tiger road files?
2
Creating map of New Mexico where deaf people live in county from US Census database?
2
Is pre-1990 historical block-level census data available online?
0
Download US census data profiles?
3
How to find income data by census tract or block?
2
USA census historical demographic data
1
Where do I find city/town point locations in US census data?
1
Joining Census block data
1
What does "Place of Work only" mean in terms of US census ACS geographical restrictions on a dataset?