So I work for a small African non-profit. I do all the GIS and data work. Most of the layers I create, I convert to kml layers so my boss can then use them quickly and easily in Google Earth. But now in the last months my shp2kml program says its license is expired and to download the newer version. I've downloaded the most up to date version I can find which isn't that new Feb 2011 and I'm still getting the same error. Anyone know another freeware program that does the same thing or know a way around this or to get a more up to date version of shp2kml. My operating system is windows 7 and i'm using QGIS 1.8.0. The non-profit can't afford Google Earth Pro edition. I need free or practically free solutions. Thanks for your help.

You can save a layer in the KML format directly from QGIS, just right-click the layer name in the Layers window, click Save As.., and choose KML from the list of file formats: 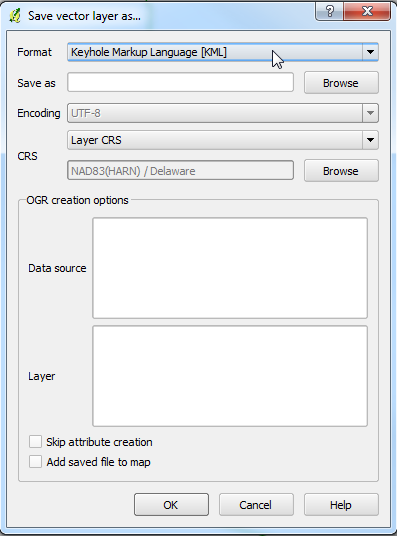 I was able to reach the author of Shp2kml 14 September 2014 and reported the problem with the "The the license for this tool has expired" message (something I first ran into several months ago). On 15 September 2014, he uploaded a newer version of the file and the expired license error no longer exists.

The program's "About" screen shows the following, which I believe is the same as the original, judging by the build value:

With the new file (perhaps it would also have occurred with the old one), I did run into a problem actually creating the KML file. I haven't run into this problem when using the program in the past, so it could be something specific to the shapefile source I'm using:

I'm not sure why that happened. Of the 179 rows of data (not including the attribute name/headers), the longest value in the "SITE_NAME" attribute is 83 characters.

I reported that problem to the author this morning and am waiting to hear back from him.

Resetting the date works fine but don't do it on your good computer as it seems to mess up anti virus etc, use an old spare if you have one then save the kml file across. I just tried QGIS for the first time and once you get the hang of it works really well.

The R package plotKML can do this for you. The package will convert sp spatial objects to KML format. From the kml method documentation:

Either change system clock as others suggest or if you want a permanent workaround get an hex editor, edit the exe file and search for this pattern:

and you will remove the date check :)

Note: I'm suggesting this here because this is a free tool, not trial or anyhow limited app... I don't think we are doing anything illegal doing this on a free app... I can guess the author added this time bomb just to make sure users always run the latest version, however the app seems almost abandoned now and no new versions are being released to update the time bomb, then...

Not the answer you're looking for? Browse other questions tagged qgis kml google-earth or ask your own question.