I have a PostGIS table of polygons where some intersect with one another. This is what I'm trying to do:

Since you said you get a group of intersecting polygons for each polygon you're interested in, you may want to create what is referred to as a "polygon overlay".

This isn't exactly what Adam's solution is doing. To see the difference, take a look at this picture of an ABC intersection: 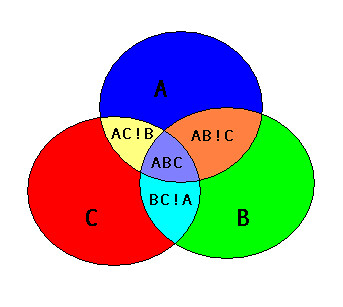 Creating a polygon overlay in PostGIS is actually pretty straightforward.

There are basically three steps.

Step 1 is extract the linework [Note that I'm using the exterior ring of the polygon, it does get a little more complicated if you want to correctly handle holes]:

Step 2 is to "node" the linework (produce a node at every intersection). Some libraries like JTS have "Noder" classes you can use to do this, but in PostGIS the ST_Union function does it for you:

Step 3 is to create all the possible non-overlapping polygons that can come from all those lines, done by the ST_Polygonize function:

You could save the output of each of those steps into a temp table, or you can combine them all into a single statement:

I'm using ST_Dump because the output of ST_Polygonize is a geometry collection, and it is (usually) more convenient to have a table where each row is one of the polygons that makes up the polygon overlay.

If I understand correctly, You want to take (A is the left geometry, B is the right):

That is - three different geometries for every intersecting pair.

First, let's create a view of all intersecting geometries. Assuming your table name is polygons_table, we will use:

Now we have a view (practically, a read-only table) that stores pairs of intersecting geoms, where each pair appears only once due to the t1.id<t2.id condition.

What you're describing is the way that the Union operator works in ArcGIS, but its a little different than either Union or Intersection in the GEOS world. The Shapely manual has examples of how sets work in GEOS. However, the PostGIS wiki does have a good example using linework which should do the trick for you.

Alternatively, you could compute three things:

Those should be the three polygons you mentioned in your second bullet point.

EDIT: you need the actual intersection of the polygon.

see if that works out.

Not the answer you're looking for? Browse other questions tagged postgis polygon intersection or ask your own question.

9
PostGIS "Overlay" Style Union, not "Dissolve" Style
12
How do I make a heat or Choropleth map that uses polygons in QGis?
15
Polygon overlay with Shapely
12
Create mosaic like Voronoi Diagram from disjoint polygons
14
How could I turn my data into a heatmap / intensity map?
8
Calculating size of particular area below buffer in QGIS?
8
PostGIS Union Between Two Tables, Preserving Attributes
9
Intersection of multiple layers in PostGIS
7
How to get smallest line segments from intersection + difference of multiple overlapping lines?
4
ST_Intersection of 3 polygons
See more linked questions