After making my best efforts to read/try everything I can on this forum and elsewhere, I unfortunately have to contribute to the wide literature of "my layers aren't aligning" questions.

I am working in SW Ontario & have some somewhat reliable reference data in NAD 1983 CSRS (Canadian Spatial Reference System). Then I have two shapefiles of points:

1). One that I created from a raw spreadsheet of lat-longs. The source reports (somewhat half-heartedly) that it should be in NAD 1983, so that's the geographic coordinate system I've defined for it.

Between these 2 datasets, certain points are supposed to be redundancies. When I hone in on such points, they have the same lat-longs (in the fields that were used to plot them), but the point from #2 is always 13-23 meters NE of the point from #1. I say my reference data (streams) is "somewhat reliable" b/c, while I know it's projected right, the points aren't necessarily going to be right on top of the stream lines, though the points from #1 often are, while #2 is offset. Thus, I've assumed my streams and #1 are okay.

This kind of looks like a central N. America NAD83 / NAD27 offset to me, but when I reproject #2 to a geographic coordinate system of NAD27, it only gets further away to the northeast. Throw in the datum transformations needed when the CSRS version of NAD comes into play, and I'm quite unsure how to diagnose my problem in a systematic way or fix it, i.e. to get these points with identical lat-longs to actually be on top of each other, preferably at the location of #1.

EDIT: The #2 points appear to have an attribute for "Geodetic Datum" specifying either NAD 1927, NAD 1983, or WGS84 (& very often blank). They're museum records covering roughly 1930-2010, so this kind of makes sense. Does this mean their lat/long attributes are all based on different reference points & the shapefile can't be fixed in a uniform way? 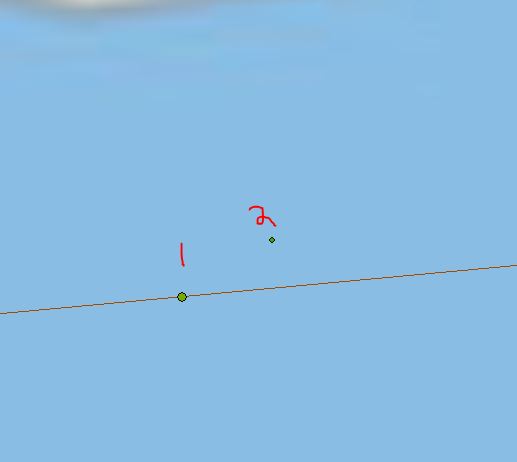 First, I'd like to confirm that you do have the Canadian NTv2 grid file installed (ArcGIS install, pedata\ntv2\canada\NTv2_0.gsb).

To check if the data is NAD 1927, unproject it to NAD 1983. Redefine it as NAD 1927, rather than reproject it. Perhaps that's what you've done, but I'm not sure. During this process, you can also check the values in the attribute table against the actual values of the data. What's there might not have been updated after a reprojection.

Edit: I missed (ignored) the CSRS information originally. Then you will have to have a two-part of composite transformation consisting of NAD27 / NAD83 and NAD83 / NAD83 CSRS. The latter transformation are available from the Ontario Ministry of Natural Resources. You'll have to sign up, but then you can download the files.

You're right that the NAD83 (original) + CSRS offsets should be small compared to what you're seeing. You may need to try checking the NAD27 / NAD83 first.

Now, based on your comments about the possible mixed set of datums. Ouch. The data may have been reconciled to the same datum / geographic coordinate reference system and that field is just metadata, or you're right and the set is actually mixed. If it's mixed, you may have to sort them into separate sets. At a minimum, check the NAD27 data because they'll be furthest off. Ones using WGS 1984 or NAD 1983 (various versions) should be within a meter or so.

Not the answer you're looking for? Browse other questions tagged arcgis-desktop coordinate-system datum canada nad83 or ask your own question.

3
datum conversion with GDAL
3
Why did my data points shift position?
2
Latitudes and Longitude Differences Based on Different Datums
3
When is data created in datums other than WGS84?
2
Discrepancy in conversion from NAD27 to NAD83
0
NAD27 data distributed in NAD83 by Canadian government