I'm trying to create a DEM using point data spaced very regularly about 10m apart. The area I am interpolating is an educational facility with many flat parking lots and football fields but still has some fairly steep hills that will often plateau to a parking lot. Due to these known plateaus, I have ruled out the Splining method; However, I'm still not sure between using IDW and Kriging methods. I can't see much of a difference after trying both of them and still haven't made my decision after a little research.

Anyone got some words of wisdom to clear this up for me?

IDW is the simpler of the two techniques. It involves using known z values and weights determined as a function of distances between the unknown and known points. As such in IDW points that are far away have far less influence than points that are close. The effect of the inverse distance weights have can often be determined by the user by changing the power that the inverse distance is raised to.

As seen in this diagram you can determine the limits of which data points (z values) IDW should take into consideration using a search radius.

IDW differs from Kriging in that no statistical models are used. There is no determination of spatial autocorrelation taken into consideration (that is to say how correlated variables are at varying distances is not determined). In IDW only known z values and distance weights are used to determine unknown areas.

IDW has the advantage that it is easy to define and therefore easy to understand the results. It may be inadvisable to use Kriging if you are unsure of how the results were arrived at. Kriging also suffers when there are outliers (see here for an explanation.).

Kriging is most appropriate when you know there is a spatially correlated distance or directional bias in the data. It is often used in soil science and geology.

But differs in that weights are helped determined by the semi variogram.

“where n is the number of pairs of sample points of observations of the values of attribute z separated against distance h” (Burrough and McDonnell, 2004: 134). 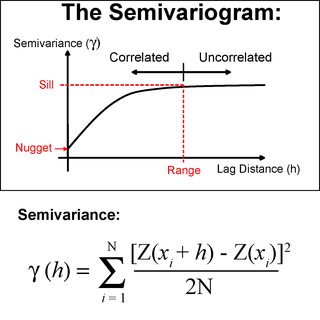 There are various different niche types of Kriging.

Not the answer you're looking for? Browse other questions tagged dem interpolation kriging inverse-distance-weighted or ask your own question.

1
when to use kriging
3
What is a relevant geospatial modelling approach when no spatial autocorrelation is found?